Santa Rosa After the Tubbs Fire

As coffee brewed in the kitchen, I took to my shower with the enthusiasm only a commuter at 4 AM can muster, mentally coaching myself for the week ahead. It was a rather warm week, so I was stunned that neighbors appeared to be running their fireplaces; the unmistakable smell of burnt roughage was potent. I put on my clothes, got on my bike and began my ride to the train station. I was immediately greeted by the barricade of fire and smoke that had claimed the adjacent neighborhood. The road exiting our block was teeming with fretful drivers. All of Northern Santa Rosa had apparently been up evacuating as my family slept. I turned around and gathered my wife and children with the intent of joining the masses fleeing the Tubbs Fire.

It is a testament to how secure we felt in our new home that we had prepared nothing for an evacuation of this kind. No backpack full of necessities, no legal deeds and contracts; we grabbed the diaper bag and bolted. We even left the cat behind. Even with the wall of flames observable from my doorstep, I did not take the impending danger seriously until we were on the road and turned on the radio. It was then that the scale of the fires began to set in. My wife vehemently demanded that we return to grab our pet and other valuables, but law enforcement had now blocked all roads heading into our neighborhood. As they battled one of the largest fires our city had ever known, they didn’t need to also face locals mucking about trying to save expendable trinkets and mementos.

Waiting for updates during a disaster is a miserable experience. Countless media outlets had descended on Santa Rosa to cover the fire, but their cameras stayed glued to the drama surrounding the hospital evacuation and department stores burning along the highway. The fires were still active, raging tangles. Trying to figure out if our block was gone meant going onto Twitter for community updates. Misinformation and wild speculation were rampant, but locals in my neighborhood posted credible pictures. Homes I recognized around Coffey Park were consumed; there were reports that the entire neighborhood was on fire. We had become accustomed to wild fires claiming remote homes in the hills dotting California, but the loss of a densely populated area in a city the size of Santa Rosa seemed unfathomable. Making things worse was the fact that firefighters were combatting formidable blazes all over Sonoma County, stretching the necessary resources and rescue teams thin. 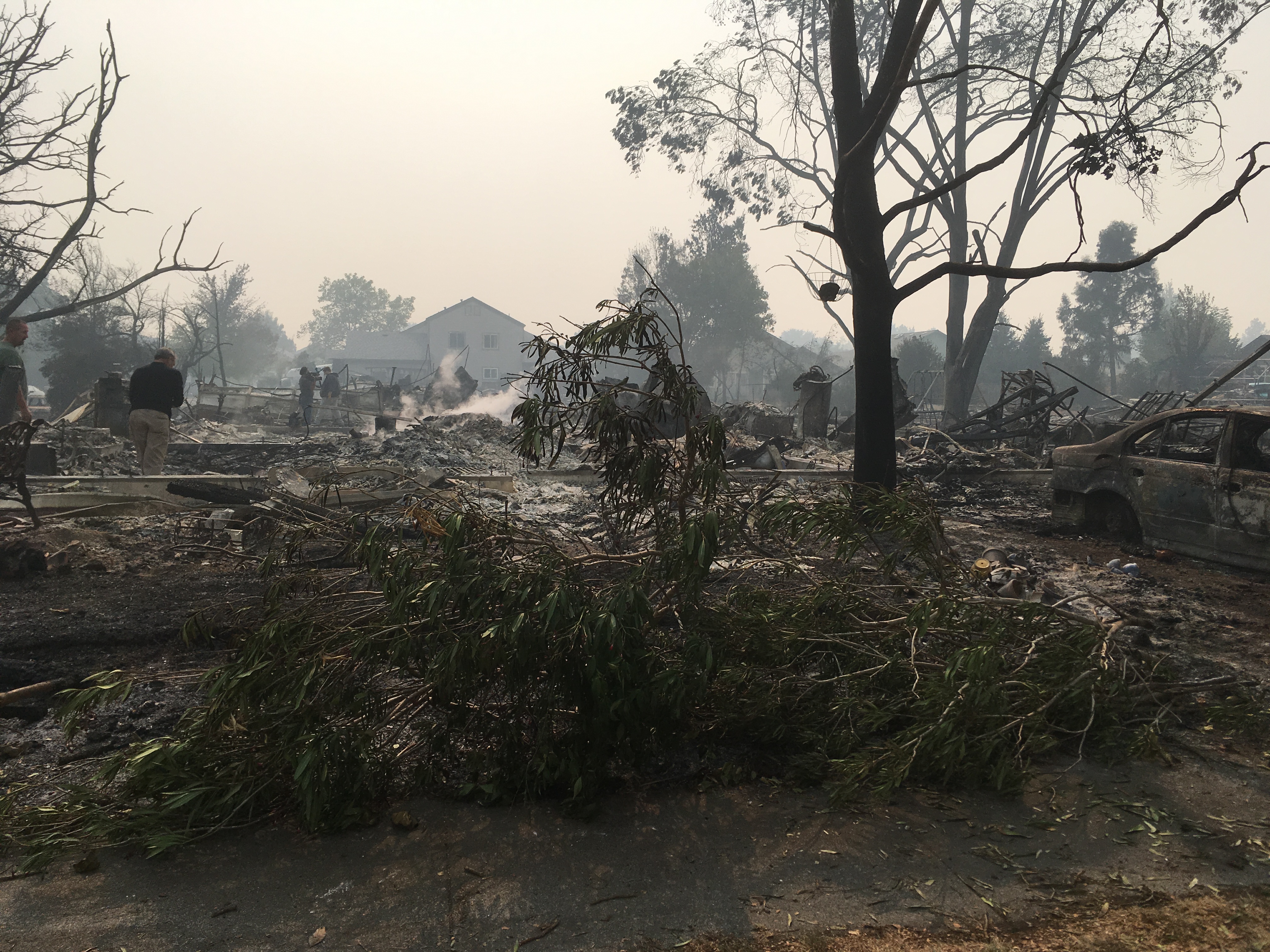 For the first time, my wife and I cried, expecting to hear that our home had also been destroyed in the fire. 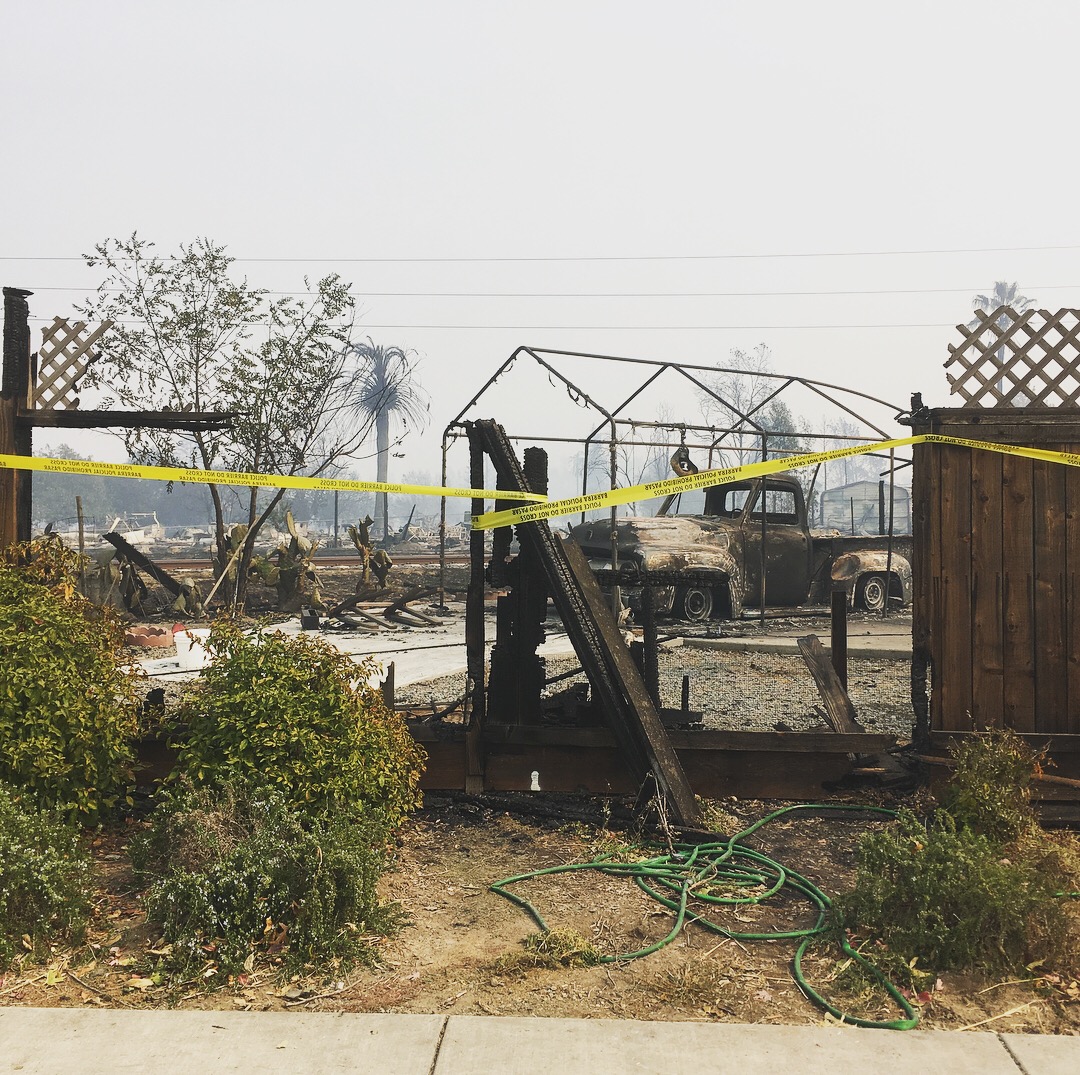 Later that afternoon, a coworker braved the police barricades and walked into my neighborhood to take pictures. There was my house, still standing and untouched by the inferno (our aforementioned cat was also safely sleeping inside). Our neighbors three blocks over were not so lucky. It wasn’t until aerial photos of Northwest Santa Rosa could be taken that the scope of the devastation became apparent. In addition to the businesses and wineries, our city had lost 3,000 homes (about 5% of its housing).

Writing in Salon, Bob Sesca noted the absence of political division during the Sonoma fires this last October:

I also learned that during the worst parts of a crisis of this enormity, politics vanished. I didn’t think it was possible in this dark age when Americans are more divided than at any point since 1861. As I maneuvered through the newly burned ghost towns and bumped into dozens of my neighbors, no one was talking about Donald Trump or Hillary Clinton or Bernie Sanders or whether it’s acceptable for professional football players and NBC News journalists to exercise their First Amendment rights. I didn’t hear anyone speculating about the climate crisis, even though climatologists will surely discover that it amplified the magnitude of these fires.

I too witnessed acts of kindness and compassion in the days and weeks following the fire. The modern world can turn the most idealistic individual into a jaded shell, and it’s pleasant to be reminded of the goodness present in one’s neighbors in trying times. Yet, to say politics were absent during the fires and their aftermath would be a deceitful take on this disaster.

Firstly, not all of your townfolk are kind and trustworthy individuals. Families packing their cars found that brazen thieves were quick to steal valuables out of open trunks. Reports began to surface that looters were entering evacuated areas under the veil of darkness, to ransack abandoned homes. Local police arrested a number of individuals who clearly intended to pillage the neighborhood. Even with our neighborhoods under mandatory evacuation, some of us returned to care for our homes. My neighbor’s sign would be replicated throughout Northwest Santa Rosa in the days to come. 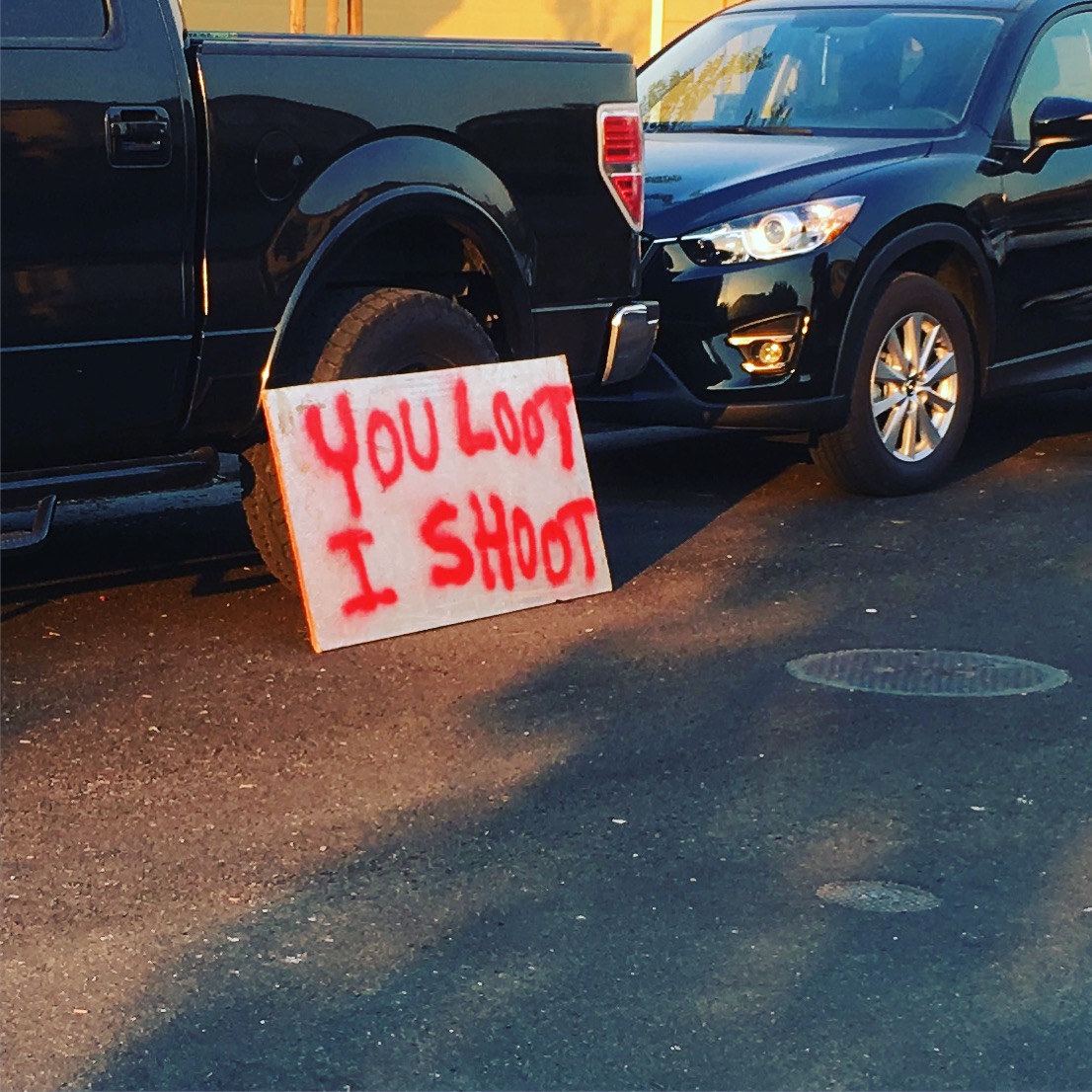 Gun-shy progressives may frown upon these community-policing actions, but I hold these simple acts to be at the heart of a social democratic mindset. We are in this together, and I will protect my neighbor’s home like my own from opportunists willing to capitalize on a people’s distress. We had just moved to this locality, and knew only a handful of individuals in the immediate area. Yet, I found a committed handful of folks patrolling the blocks around our house making sure no one’s home was the target of theft. They had nothing to gain from this other than the spirit of camaraderie with others experiencing an analogous setback. Solidarity forever. 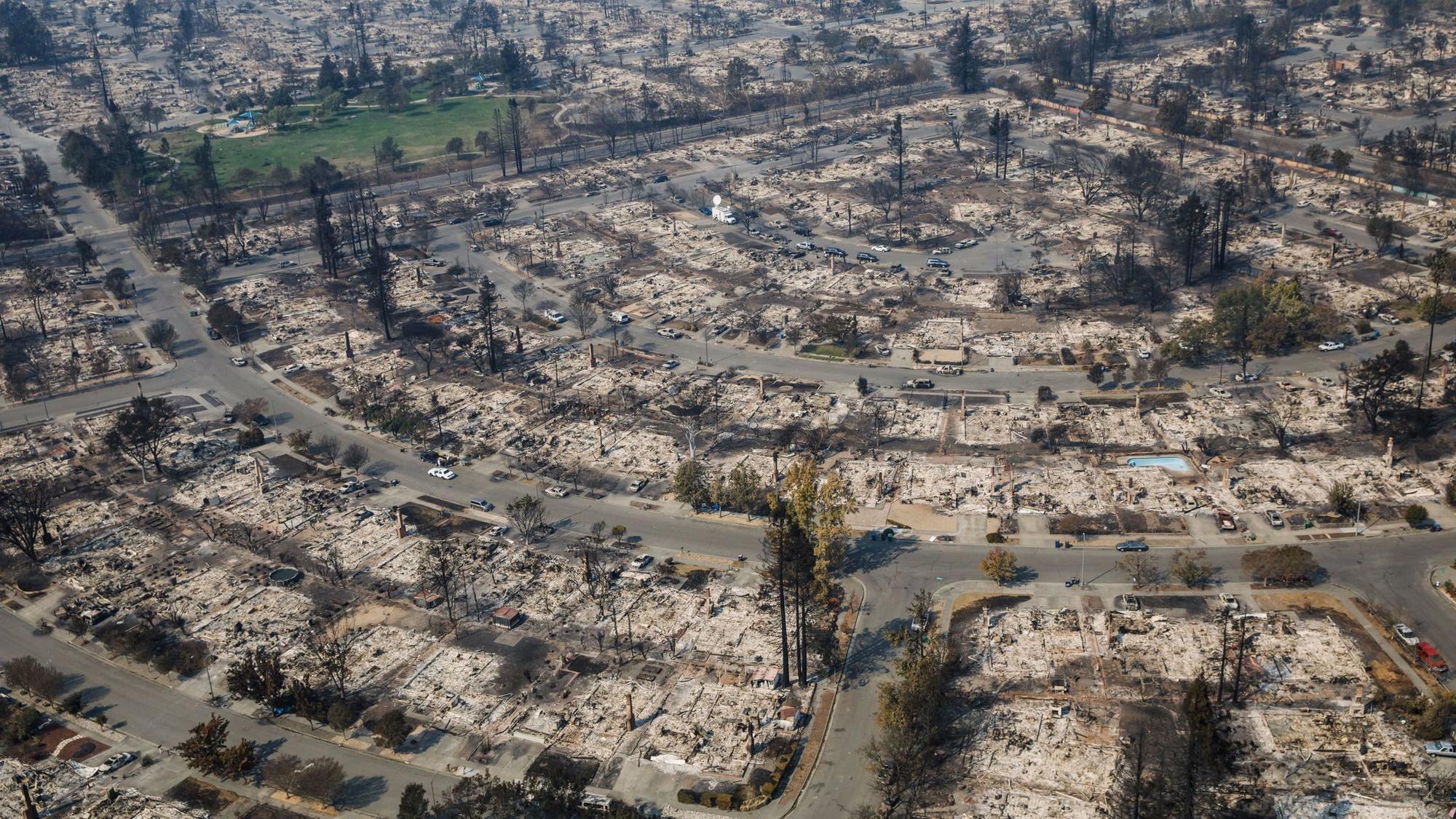 From the LA Times

Secondly, the aftermath of the fire has made worse the economic difficulties residents have experienced in Sonoma for years. Unfortunately for Santa Rosa, the lasting impact of the fires will be on the cost of housing and the growing economic gentrification the entire Bay Area is experiencing. The income gap between wealthy residents and the middle and working classes had already grown considerably in the preceding decade; the destruction of a neighborhood made up of middle and working class citizens in Santa Rosa has suddenly exacerbated that divide. Rents have risen considerably over the last few years, but with 3,000 displaced households now flooding the market, prices have predictably risen considerably. Louis Sahagun wrote in the LA Times:

“My landlord said he plans to rebuild,” said Ditmore, 62, who ran a day-care business out of her home. “If I can afford to move back, I will. But like so many others, I’ll have to wait and see.”

Hers was one of hundreds of homes that burned down last month in Coffey Park, where about 40% of the residents were renters. A website recently posted by Gallaher Construction Inc. of Santa Rosa, titled “Bring Back Coffey Park: Looking to Rebuild or Sell?,” has only stoked concerns that a neighborhood reduced to ashes will be rebuilt as something vastly different.

A month after wildfires ripped through this city of more than 160,000, there are debates about the fate of working-class residents and undocumented immigrants, the shortage of available housing for displaced residents that has pushed rental rates into the stratosphere, and whether the firestorm will trigger an exodus of engineers, doctors and nurses, teachers, emergency responders and agricultural workers — and with it an economic downturn.

In my neighborhood, you have a cross-section of working- and middle-class families. Work trucks litter the available off-street parking, with most residents balancing a hefty mortgage carefully while juggling young children. This is not a community that can easily absorb thousands of dollars in loss in housing or property. There is a distinct fear that the well-to-do, often employed by the tech or financial industries in San Francisco and Silicon Valley, will increasingly see Santa Rosa as a bedroom community, outbidding locals in the real estate market. My family was lucky; we were able to buy a small home in July by offering only a few grand over asking price. If we were still looking to buy today, we could expect to pay 40 thousand more for the home we bought just a few months prior. For renters, the situation is even grimmer. The apartment we moved out of in July is asking 450 dollars more than when we lived there in June. On paper, you can make a decent amount of money in the Bay Area compared to your compatriots elsewhere, but with the spike in the cost of housing, those higher wages quickly evaporate in the real estate ether.

Santa Rosa will never be like San Francisco, with its hipster population fueled by start-up investments, but working people are finding it increasingly difficult to call the place home. I pray that the city I love and call home never finds itself mirroring the economically-partitioned urban centers that pass for cities in parts of America. The conditions left behind by the Sonoma fires have only heightened the existing housing and distribution issues plaguing the area. Like many of my neighbors, I fear for the fate of Santa Rosa.