Twilight in the Kingdom of Pariahs and Predators

(CN: Will thought this might need a content note if Maribou wanted to write one. Maribou, who of all readers usually needs a content note for anything to do with underage people and sex, doesn’t really think this essay needs one though? Um.  Serious age imbalances in the context of relationships, some of which were illegal, but nothing graphic. Honest discussion of being a 17-year-old on the internet. Quite possibly the comments may stray into bleaker or cruder territory than the essay does. That’ll do.)

When I was 17, I knew this girl. She had come out of nowhere into my life and was suddenly central to a lot of the most important parts. My friends became her friends to the point that by the time we actually made our acquaintance, we already had a lot of people and things to talk about. That never happens to me. And talk we did, often late into the night. One night, she was supposed to come over. It felt like that was the night something was going to start. She was going to visit a friend on my side of town, and then come over. And my life was going to change.

It did, but she never showed.

What happened instead was that she met this friend. They went to the park. They talked for hours and hours into the night. She lost her virginity to him there. They used no protection. She spent the balance of her cycle terrified that she was pregnant. He spent the balance of the month avoiding her and explaining everything that their night together did not mean. She was 16. He was 24. 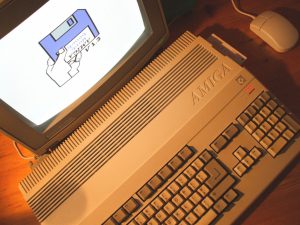 One thing I left out of the story is that she and I had never met. She and the other guy had never met until that night either. Everything that had happened, happened either on the phone or more frequently on the computer. The Internet wasn’t really the Internet yet, but we had something else. We all called in to local BBSes and there we had chat rooms, message boards, games, and it seemed just about everything you’d need to live in a culture parallel to the one that our peers at school were living in. Because we were all dialing in, however, we were constrained to our local call area, which meant that almost everybody there lived within an hour’s drive.

So it wasn’t just a cyber-community, it was a community. The more you logged in, the more that community became your primary community.

Normal people had very little use for such things. They had schools or churches. They had neighbors. They didn’t need to reach across the city to make friends, have drinking parties, or go and do things. To be the kind of person who needed that, you were likely to be different. And you met other people who were different. It was wonderful, amazing, and at times quite dangerous. Outside of the traditional networks was the traditional supervision. Also, the more traditional norms. Screw those norms.

One of those norms involves the story above. When people don’t have a lot of dating options – and most of the people there didn’t – you have to reach further sometimes than people at your school. That might mean race, distance, or experimenting with members of the same sex. For a lot of people, it was age. For a lot of people, the thing that stops someone old from dating someone young is social disapproval. Date the wrong person and your friends will laugh at you. This might be tragic in cases where they would say “But she’s fat, dude!” but it’s actually good if they would say “Man, she’s just a kid.” The whole situation lacked the guardrails of social norms, and the things that happened reflected that. This is the social environment in which I came of age, and my own perspective on these issues reflects that.

Untethered by conventions, the couplings I saw were of many shapes and sizes. One guy I know was twenty-three when we met and was getting over his ex-girlfriend who was 38. A couple years later he was dating a seventeen year old who was one year older than the first one’s daughter. There was a mother of a twelve year old encouraging her to date a sixteen year old (though she believed – correctly – that there wouldn’t be sex). There were couplings of nineteen and fourteen where it wasn’t at all clear who was steering the ship. Where other people are horrified, I needed more details to know whether I should have been horrified or not. Still do, though to a lesser extent. There were limits, but they were a lot wider than anywhere else I knew. We all knew the relationship that opened this post was illegal, but it was only on the border of being wrong from an age perspective. The focal point of that was how he had used and discarded her, and he was impressively able to talk his way out of that and into everybody’s (including her’s and my own) good graces. I take something of a different view now, but in that time and place we wouldn’t have thought much differently of him if he had been 16 and done the same things.

One thing about rejects is that they attract predators, and the BBS environment was no different. There were a lot of contortions one could go through to give some of those age differences a pass, but there were some for which no pass was possible. There were people whose sole reason for being there was to find and pick up underage girls. They were identified pretty quickly and banned or called out, but it was all a bit of a game of whack-a-mole. Given the givens, it’s surprising that there wasn’t more of it than there was. There were also people that it was known what they were doing, but they weren’t actually doing it on the BBS. Those are the ones that still bother me.

One of the lessons I learned, though, is that it simply isn’t the case that relationships fall into categories of predatory and permissible. The law likes to draw bright lines. This behavior is okay, that behavior is a felony. This will land somebody in prison for a time and on a list for the rest of their lives, and that will result in nothing but a pregnancy test somewhere down the line. If your birthday is off one day in this way or that way, it makes all the difference in the world. It’s hard for the law to do anything else, I suppose, but I’ve seen real life stubbornly refuse to work that way. I’ve seen predatory relationships that are legally in-bounds and decent ones that weren’t.

Within expanded parameters, the things that raised red flags for us were not usually ages or even maturity levels. Two people across a divide might hit it off, or be curious, or any number of things. It was, for better or worse, a freewheeling environment in that regard. They might couple up, grow, and then fall apart one step ahead of where they were. The ones that created problems tended to be the ones that would habitually target people younger (or older) than them. Sometimes that was simply due to an unusually low or high maturity or experience level for their age. But usually, people that pushed against that boundary had other things going on. It was almost never their only thing. If they weren’t predators of some sort, they were often in a very destructive place personally or emotionally.

Among the reasons that the pattern was so indicative is that for the most part, it turns out social rules (including the informal ones) exist for a reason. This one has reasons beyond fear of coercion. Some of those relationships were fine, others were terrible. They were rarely good. I can name a couple success stories – including one of the above stories – but not many. The better ones were where you got burned and learned a lesson. Which I guess is true of most adolescent relationships, but especially true of these. And sometimes it was the older one who did the learning. But if you keep doing the same thing, you keep failing, and you keep not learning, then it becomes apparent that age is the thing. And when age was the thing, that was usually a pretty bad sign.

I mention “there were limits” above. It wasn’t so much that there was a rulebook, it was just that across some age gulfs the only people who wanted to tread were the habituals and those that leaned more on the predatory side of the spectrum.

Unless you’ve been living under a rock for the last week or so, you’ve heard that Roy Moore kept doing the same thing. And of the success stories I can point out, including the ones where there was growth and there were lessons learned, none involved anybody over thirty with anyone under twenty. Almost everybody who was in that game was habitual, and often to the exclusion of anything else. Age was the thing, and it usually represented a hole in their self where something else (maturity, morality, whatever) needed to be, or worse, the existence of something malignant.