Republicans should be deeply concerned about Tuesday night’s results.

Contrary to what some think, Ed Gillespie had a pretty good night in terms of getting his votes out. Gillespie got more votes than Ed Cuccinelli in every county across the state of Virginia. Considering what appeared to be a hostile national environment, that was a real accomplishment. Moreover, Gillespie really did bring serious firepower in terms of getting votes out in Southwestern Virginia.

The below map shows the counties where Gillespie exceeded Cuccinelli’s 2013 vote totals by 30 percent or more. 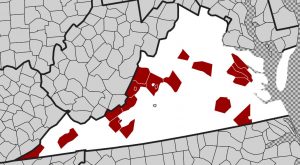 If you were a Republican strategist and your goal was to increase turnout in rural Virginia, a la Donald Trump in 2016, you had to be pretty pleased with what you were seeing. In Virginia’s 40 most rural counties, things looked pretty solid for Gillespie. Compare what had happened in 2013 to 2017.

Cuccinelli lost to McAuliffe by 56,000 votes in a pretty close election. So Gillespie picking up 20,000 in such small counties probably offered some hope: he was already 35% of the way there. At the same time, Gillespie had held strong in suburban places like Loudoun County, increasing his vote by over 5,000 over Cuccinelli’s totals. If you were only looking at Gillespie’s raw vote totals, you might think he pulled off the inside straight and won outright.

Of course, Northam did something completely unexpected in Loudoun County. He blew away the previous off-year numbers, adding 25,000 votes.

Northam cancelled out the rural counties in Loudoun County alone, even though Gillespie got a pretty strong number of votes there.

Stated differently: it really wouldn’t shock me if Gillespie hit his raw vote target in Loudoun County, and in a lot of other places around the state. But it didn’t matter, because tons of suburban voters punished him. Below is a map of all the counties and cities in Virginia where Northam pulled in 30 percent more votes than McAuliffe in 2013. 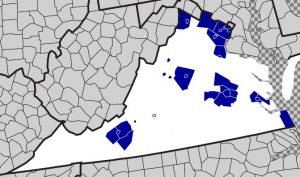 What are these? Almost all are well-educated, affluent suburbs and cities: not only the DC burbs, but also Richmond, Charlottesville, Blacksburg, and Virginia Beach and the surrounding environs. These are heavily populated, and in 2017, they voted Democratic. The raw vote totals are frankly intimidating from some of these places.

The overall pattern is clear, when you compare 2013 and 2017: Gillespie outpaced Cuccinelli throughout much of the state, but it didn’t matter in the face of the suburban onslaught. The below map compares the 2013 and 2017 margin of victory; darker shades of color imply a bigger shift from 2013 to 2017. Gillespie did better than Cuccinelli all across rural Virginia, but it didn’t matter. 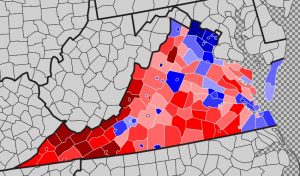 Gillespie even outpaced his own 2014 Senate bid by raw vote totals across almost the entire state. He got fewer votes in only 7 counties (and cities outside of county rule): Fairfax County, Fairfax City, Arlington County, Alexandria City, Prince William County, Falls Church City, and Winchester City.

Two factors make this worse. First, Gillespie is really a pro. He’s a telegenic, successful former RNC Chair who knows how to run a statewide campaign. And he drowned.

There aren’t many more Ed Gillespie-caliber candidates out there. What you’re actually going to see in 2018 are a bunch of reluctant or weak Republican candidates, knowing that they’re proceeding into a slaughter, facing off against motivated Democratic candidates who have been waiting 10 years for this opportunity. Many vulnerable Republican incumbents or talented potential candidates will sit this one out, choosing to spend more time with their families, or enjoy a cushy six-figure lobbying gig in the swamp.

Second, the same pattern held in both the DC burbs and the non-DC burbs. If this had been limited to Northern Virginia, one might write it off as the backlash of bitter Beltway bandits. But the suburban vote boom occurred throughout the state.

With all this in mind, if the Democrats replicate this sort of turnout balloon in the suburbs in 2018, the wave will be enormous, and the Democrats will emerge in 2019 with a comfortable House majority.

To Republicans: if you don’t fix this, winter is coming.

Sources: The Virginia Secretary of State’s election website is one of the best in the country, so, kudos to the Old Dominion for that. All Virginia election results came from there. I scraped the unofficial results of the 2017 Senate election into a useful table with Python and BeautifulSoup. I use a version of these instructions to make choropleth maps.