A Fifth Qatari Travelogue: The Blockade

I’ve spent a few months hearing about the various goings-on with Qatar being under a blockade of some sort by its neighbors. I wondered what it would be like to go there. I heard that there were new pictures of the Emir everywhere. Indeed, brother j r told me:

Oh yeah, there’s this viral Che-style image of the Emir that was up all over the place. Wondering if it was there the last time you were there. Heard it was a new thing, since the beef with the other GCC members.

Let me begin by saying that, yes, I saw the picture. I saw it in lots of places.

The newspapers we read in the mornings had a countdown on the masthead. “Day 110 of the Siege!” The next day: “Day 111 of the Siege!”

There is a real sense of optimism on the front page. On the day that I started writing this post, for example, I checked out the front page of the paper (Warning: PDF) to see what was going on.

Day 122 of the siege. Articles talking about stuff getting better. An update on the Emir sending out a telegram to Iraq. A Hague seminar on how unjust the siege is. An article talking about steps the government will be taking to help reduce traffic on the roads.

Nothing but indications that things are looking up.

The Calvin Harris song “Feels” was everywhere. When we first got there, the radio wouldn’t stop playing it. Please note: this is a song where Katy Perry is cooing the line “I know you ain’t afraid to pop pills”. Halfway through the trip, someone somewhere must have actually listened to the lyrics because the radio added a bit of censorship so that she was singing “I know you ain’t afraid to pop (beat of silence)”.

I found myself thinking “holy cow… when all of the old people were complaining about my music back in the 80’s, they were 100% right.”

The impact of the siege is really difficult to judge from a two-week visit but there were a handful of things we noticed. For one thing, the hotel we stayed at was connected to a mall and the mall had a Carrefour in it (think “Super Wal-mart” or “Super Target”). On our first visit, we wandered over to the snack aisle looking for Lay’s French Cheese Potato Chips.

We couldn’t find any Lay’s potato chips at all. We looked at the top of the display and saw the little paper insert that announced “this is the Lay’s potato chip part of the section” but, underneath, there was nothing but alien potato chip companies that we didn’t recognize. We tried some of them. We finished none of them. Additionally, the Pizza Hut where we would occasionally purchase a pizza ran out of pepperoni.

When we visited the Souk Waqif, several of the stores had signs that said something to the effect of “We Proudly Only Sell Goods From Qatar Or Friendly Nations!” (I mean, if you’re going to spin selling the equivalent of alien potato chips instead of Lay’s (which are trucked in from Saudi Arabia), that’s how you’ve pretty much gotta spin it.) 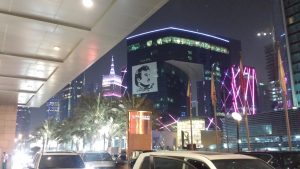 The Che-style image of the Emir is *EVERYWHERE*. It’s 10 stories high on some buildings. It’s on a 20 foot banner on the shorter buildings. It’s on the video screens at the airport. It’s on t-shirts, hats, and posters. I walked past one poster and saw that it had been scribbled on and I immediately freaked out a little inside and thought “they vandalized a picture of him?” and looked closer and saw that it was covered in little sentences like “I (heart) Qatar” and “(country) supports Qatar” (and, probably, some “we stand defiant in the face of the blockade” statements were sprinkled in there too).

I was confused for about a half-second and then realized that this sort of thing was *BRILLIANT*. If you looked and saw some graffiti on one of the ubiquitous posters strewn on nigh-every wall, building, and window, you wouldn’t flip out like I was inclined to at first. Instead, you’d think “oh, more people affirming their love for Qatar”.

My anecdotes about how bad the driving is over there have stopped being fun to tell.

We drove past an accident on our way to work one day. The police had their cars with lights flashing and they were standing in front of an overturned sewage truck and waving people to get into the right lane. As we passed, we saw a crumpled mass in front of a windshield that was broken through. We didn’t see another vehicle so there was no obvious cause. I found myself wondering what happened as we finished our drive to work… was the guy in the truck cut off by one of the hundreds of vehicles demanding to drive at 160km/hr and weaving in and out of traffic causing the driver to freak out and flip his truck? Did the driver just fall asleep at the wheel? Did the driver just not know how to handle the truck? The pool of sewage was still growing. It had happened recently enough that it was still growing.

The next day, driving to work, we looked for signs of yesterday’s accident. There was no sign of it.

Day two or day three into our trip, workers started putting up barricades lining the streets. They put up similar ones last time we were here as part of a 5k that everybody was running and so I jumped to the conclusion that, hey, they’re doing it again. It was September, after all. Almost October. That’s practically 5k weather. I said to my co-worker “looks like they’re doing a 5k again.” “We should sign up,” he told me.

We work for a few more days and we get to the weekend and we finally have a day off.

So we grab the car and get on our way, or make the attempt … but trying to leave the hotel, we saw that our exit was blocked by a fire marshal pickup truck. Okay, fine, whatever, we went out one of the egress ways that may or may not have been an entrance and got on the road to the souq (in this case, al Corniche street) and turned right and… well, we hit a red light. And it stayed red. And there were cops everywhere. Like, *EVERYWHERE*. We were at the front of the line where we were at the light, so they must have just recently turned them red… was there an accident or something?

We turned on the radio to the English-speaking booty music station and the DJs were talking about how, on al Corniche street, THE EMIR HIMSELF was returning! They rattled off his accomplishments while overseas, mentioned how great it was to be Qatari, read a handful of texts from people currently on al Corniche street waiting for the Emir to return, and asked listeners to send texts explaining what the best name for today should be. “Victory Day” was one. The DJ had never heard “Red Letter Day” before and she googled it and read the definition over the air and said “wow, that’s a great name! Today is a Red Letter Day!”

Off in the distance, we saw one helicopter… two helicopters… and they were flying towards us. A single fire marshal truck rode down the opposite road. Then two pickup trucks. Then a pickup truck with a guy with a news camera in the back came down. Then a WHOLE BUNCH OF CARS IN A ROW. A couple of which had men dressed in white standing in them and they were waving to the crowds. In the middle of the motorcade was a big black car. Then a whole bunch of pickup trucks. Then a police car. 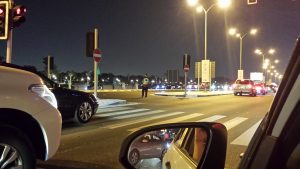 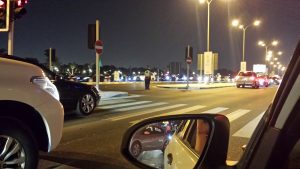 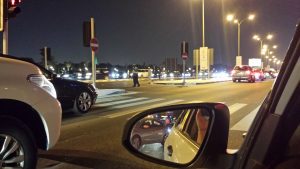 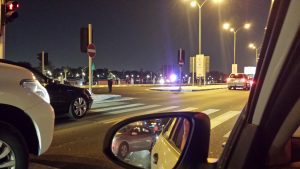 And then, 10 minutes after the motorcade passed, they turned the traffic lights back on and we drove to the souq.

We looked around and when the traffic started moving again, we were able to really look at all of the cars. We saw that about half of them were decked out with those little flags like you’d see people flying for the Broncos or the Avalanche but they were all Qatari flags. We drove past little families sitting on the grass on the side of the road where they were all decked out in Qatari national dress and the little ones were holding little Qatari flags to wave. A couple of moon-roofed Escalades drove past with teenagers standing up through the moon roof waving regulation sized flags. There was even a pickup truck with a great big Qatari flag flying in the back that really looked kinda cool when they were able to drive faster than parking lot speeds.

All the while, the DJ was reading texts from everybody who was on the same street that we only happened to be on by chance and everything she read was gushing about patriotism, defiance in the face of the blockade, and expressing pride in the Emir.

We saw something that I’d never seen before while there. Men dressed in Qatari national dress head to toe were ubiquitous but, every once in a while, Qatari men wearing the long white robe (the Thoub) and, instead of wearing the starched white headdress and black cord (ghutra and agal), wearing a ball cap. We saw three or four of these guys. A couple of Yankees caps, a Spurs cap, and a brand I didn’t recognize. All with the long white robe.

We found that the drawing was called “Tamim the Glorious” and we found a handful of pieces talking about the artist and others talking about how viral the picture has gotten.

And, of course, articles talking about how this portrait is a symbol of the defiance of the Qatari people in the face of the blockade.

One thing that I noticed toward the tail end of the trip: When I thought “The Emir”, I had stopped thinking of Hamad. Hamad is the Emir’s father. Now, when I think “The Emir”, I think Tamim. “Tamim the Glorious.”