Disaster Response and the Autopilot Government 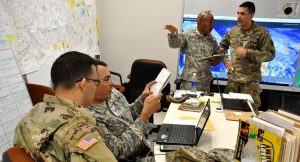 Image by The National Guard

One of the more eye-roll-inducing season one plots of The West Wing was when the show determined that the President of the United States needed to be personally involved when the US Navy conducted hurricane avoidance maneuvers. After some of the response to Hurricane Maria, I might need to owe Aaron Sorkin an apology.

The vast majority of government actions during a crisis are on ‘autopilot’ from the point of view of the elected representatives that run the government.   Either they are straight up pre-planned responses, essentially like operating from a cookbook, or the decisions made are made by people that have long been employed by the government in some capacity, and are considered professionals in their field.

According to the Plum Book website, there are 286 political appointee positions within the Department of Homeland Security of which 22 are vacant. Drilling down into FEMA, it has 58 positions of which 8 are vacant.  It is of course well known that this Administration’s first DHS Secretary, confirmed by the Senate, now has another job, so the current acting Secretary is Elaine Duke. Though she is just an interim boss (for now), she should be perfectly capable of doing all the duties required of a Homeland Security head honcho.  She was Senate confirmed to be the Deputy Secretary (#2 person), and has experience as an executive-level manager in the same Department during both President Obama and President Bush 43’s administrations.  Furthermore, if there’s any Department (besides Defense) that needs to be good at continuity of operations if certain personnel in the hierarchy are not present, it’s Homeland Security.

Some of these senior personnel have indicated that they may be in over their heads (or they are just making mistakes).  The current FEMA director is Brock Long, who is Senate confirmed, and on paper, perfectly suited for the job.  (He essentially had the same job on the state level before the current gig.) But, Director Long is rightly being criticized for saying hurricane relief for Puerto Rico is “the most logistically challenging event the US has ever seen.”  Which, at the very least, shows a narrowness of vision.

Tom LaCrosse currently has this job in the Department of Defense (or he works for that person as director of the Defense Support for Civil Authorities office. He’s been on the job at least a few years now.   So I am not sure if he is a political appointee or civil service.) In any case, he spoke with a Washington Post reporter a few days after Maria’s landfall, and said the USNS Comfort hospital ship wasn’t being sent to Puerto Rico as there was “no port deep enough to bring it in close.”   The USNS Comfort arrived in San Juan on Tuesday October 3.  (Here’s a video of her mooring at a pier.)

The USNS Comfort has been a benchmark to me for measuring how effective the US Government’s response to the Maria aftermath is.  But moreover, it’s a measure of how effective the ‘permanent government’, the so-called ‘deep state’ – the ‘auto-pilot’ is working. It shouldn’t require Presidential-level action to get a single navy ship to move from Point A to Point B.   The Comfort is organized such that the medical Navy personnel are a mix of active duty and reservists from several different commands and the crew are civilian mariners, so it takes a while to stand up.  The internet is floating around a number of 96 hours from when the order goes out until ready for sail. But everyone is well aware of this, so the question is why the recall did not start when Maria was taking direct aim at the center of the island, instead of days after landfall.

DHS has put up a Maria response timeline.  Its main purpose is, of course, to say ‘hey, we did our jobs, and look what a good job we did’.  And, to that end, it does well enough. I was giving the response some benefit of the doubt in the first couple of days, as I believed then (and still believe) that trying to surge supplies from the mainland US to Puerto Rico needed to wait until Maria was ‘out of the way’ due to the storm’s track, and potential variations of it.

FEMA, like a few other government agencies, is essentially a coordinating agency, having very few organic assets of its own.  It relies on the Coast Guard, the military, and first responders at the state and local level to provide most of the capabilities, and in turn, the personnel that actually do the nitty-gritty details (e.g.  rescues from harm and immediate humanitarian relief). To me, what FEMA, DHS, and the whole of the US Federal Government have still not learned how to handle – at all – is any situation where local capabilities are inoperative due the event itself – or if they just weren’t there to begin with.  All this despite that facet of disaster management being one of the biggest lessons of Katrina, a lesson Tom LaCrosse specifically discussed in his interview with Federal News radio linked above.

“I vividly recall getting a $1 billion request for assistance from FEMA for DoD to take over logistics operations in the area affected by Katrina. It took us a full weekend to break that down into about eight separate requests while we figured out what capabilities we had,” LaCrosse said. “That’s 72 hours that was lost, we never got back and that could have been used to move supplies to the survivors in the disaster area.”

Yet, the biggest problem we’ve seen with the response to Maria in Puerto Rico is that there are container loads of supplies on the pier, and no way to get them to the people that needed them at the time they needed those supplies.   Everyone in the government that does major disaster response for a living is still too slow with their decision and action loop – figure out what’s going wrong, what needs to be done to fix it, and then figuring out if that thing to fix it worked, plus what to do next.

Last, if the auto-pilot isn’t working, it is certainly the responsibility of the Pilot In Chief to fly the plane manually – to straighten up and fly right. Nonetheless, I have no faith that the current Pilot in Chief will do so.  The best case to hope for right now is that some other members of the crew on the flight deck may just do the best they can.

Ken was in the US Navy for 20 years, and has been on the internet for 25 years. Recently discovered that he is a cat person. Formerly a political libertarian weirdo, but not completely formerly.