The “It” Movie Review

If the staggering opening weekend box office for “It” is any indication, there are a lot of people out there who were haunted by Stephen King’s original novel, the Tim-Curry-starring mini-series, or both.

For me, it was the mini-series. I didn’t read the book until I was in high school, but I have vivid childhood memories of having to use the bathroom in the middle of the night. I would sprint across the hall and slam the door behind me. When I was done, I would stand there with my hand on the doorknob for what seemed like minutes, reluctant to open it and have to look down the staircase to the first floor. I had visions of a clown, emerging out of the darkness and leering up at me like Renfield in “Dracula.”

Frankly, the mini-series doesn’t hold up, but I’ve buried the lede long enough. Does director Andy Muschietti’s “It” impose the same scars as its previous iterations?

Actually, no. But that’s okay, because this new film is a blast.

Screenwriters Chase Palmer, Cary Fukunaga, and Gary Dauberman do a great job pruning and re-structuring the novel, which took place during the 1950s and 80s, featuring the main characters both as kids and adults. This latest version moves the kids’ narrative up to the 80s and jettisons the adult storyline altogether. (Though it will most assuredly be headed to a multiplex near you very soon.)

Derry, Maine, has a long and dark history. “People disappear here at six times the national average,” we’re told. “And that’s just grown-ups. Kids are worse. Way worse.” After young Bill (Jaeden Lieberher) loses his brother Georgie (Jackson Robert Scott), he and his friends discover that the various apparitions that haunt their small town are all linked to a shape-shifting, shark-toothed clown named Pennywise (Bill Skarsgård). This entity feeds on the fear of children before feeding on them…literally. Bill’s Losers’ Club wrestles with whether or not they should vanquish this evil and whether or not they can.

I love the atmosphere Muschietti sculpts. As in the book, there’s an indifference on the part of the grown-ups to what’s going on, almost as though they forget every time it happens. We see missing children flyers taped on top of one another. Adults turn a blind eye to Henry Bowers (Nicholas Hamilton) and his twisted bullying. And listen carefully whenever the television is on in the background. This menace has been in Derry for a long time, and it’s seeped into the very fabric of the town.

Save for a couple of hair-raising exceptions, “It” didn’t really frighten me. In an overhead shot, a gloved hand reaches from a storm drain for a poor boy as he tries to crawl to safety. As the bots in MST3K would say, that’s some good ol’ fashion nightmare fuel. But most of the scares work like jolts in a haunted house. You get a bit of a jump and then have a laugh. Fun if a bit cheap in the moment, but doesn’t linger. This is the part where I stress that fear is a really personal emotion, and if reactions at my opening day screening were any indication, some of those audience members didn’t sleep well that night. But yeah, this adaptation functions better as a coming-of-age adventure than as a horror film. Blood oaths, spitting contests, and constant ribbing. It nails the childhood camaraderie that you find in movies like “E.T.” and “Stand by Me.” (The latter is an adaptation of King’s “The Body.”)

Rarely have I seen young performances so natural on screen. The Losers’ Club is comprised of Ben (Jeremy Ray Taylor), a heavyset bookworm who’s new to Derry. There’s germaphobe Eddie (Jack Dylan Grazer) and Mike (Chosen Jacobs), a young man who might not be cut out for making tough decisions. And there’s Stanley (Wyatt Oleff), who’s getting ready for his bar mitzvah. That Stanley and Mike, an African American, get the least amount of development in this band of outsiders is troubling – Mike, in particular, as he basically disappears during the film’s middle stretch.

But the standouts for me were Finn Wolfhard as Richie and Sophia Lillis as Beverly. Fans of “Stranger Things” will recognize Wolfhard from that hit Netflix series. Here, he’s the trash-talking comedian of the group, constantly trying to impress upon his friends the size of his clown shoes – if you catch my drift – as young boys (and older ones, let’s be honest) are wont to do. The film can be uproarious, but there’s an honesty to the humor that doesn’t derail the tone.

Lillis’s Bev has been battling monsters since long before the clown reared its powdered white head. After she comes home from the drugstore with tampons, her father smells her hair and asks if she’s still his little girl. Though the film is very entertaining, it clearly retains some of the more disturbing elements from King’s novel. Other than, ya know, child murders. Pennywise latches on to her fear of adulthood and her father. In one of the film’s more visceral moments, a geyser of blood erupts from her bathroom sink, covering Bev and the walls. 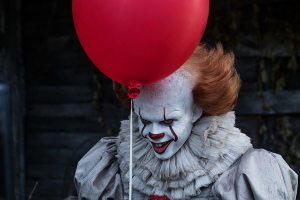 I still prefer Curry’s Pennywise. Hell, the clown might be the least scary part of this new film. And maybe that’s by design, because some of these adults – yeesh! Curry was a character in his own right, someone that would have an insidious rapport with the kids. Bill Skarsgård’s creation is much more the faceless monster in the closet. I do appreciate that he took the role in a different direction. His Pennywise feels like something doing an impression of a human, but it hasn’t quite got it down. The way he moves and the way he talks—words don’t sit naturally in his mouth. CG is sometimes implemented too much to bolster his performance, but there are some great, subtle uses of it as well. Every now and then his eyes just…misalign. Very unsettling. (Though it also reminded me of my Chihuahua. She’s got the same problem. Less unsettling.)

So would “It” be a stronger film if it hit our fear center with more force? Sure! But that’s not to detract from all the things it gets right. Great atmosphere, characters you can get behind, and uniformly strong performances (from kids, no less). It’s been a while since we had a horror movie or thriller that played like a big summer blockbuster. No wonder it’s devouring the box office. It’s part of what makes the communal theater experience so vital. See it with as big a crowd as you can find. There are lots of laughs, lots of cheers, some screams, and even a few tears.

Have you seen “It?” What did you think? And what films scared you as a child?