Will Teaching About Growth Mindsets and Grit Work?

Content note: I am not a psychologist. My history of psychology is recalled from memory, some of which might have been faked.

I’ve read his The Interpretation of Dreams, and it’s enjoyably clever, but retrospectively, it is largely anecdotal garbage. The lay-media critiques of Freud seem largely correct. He imposes his theories onto a patient’s situation rather than coming up with a theory based on evidence collected from patients.

Other psychologists decided they were going to do psychology The Right Way with Science. BF Skinner is the behaviorist you’ve heard of who did experiments with rats. He was big on the idea of looking at observable behaviors. He regarded postulating things about mental states held by a person or animal to be a waste of time and intrinsically unscientific as it could not be directly observed.

Look, he insisted, at what can be measured.

Skinner’s mistake was the mirror opposite of Freud’s. Mental states do actually exist. You have a mental state right now, and it will very much affect what decisions you will make. Ignoring that doesn’t make you more scientific. Additionally, who actually cares about rats?

To take psychology out of this sorry state came people with scientific surveys. They had “instruments” (survey questions) they developed to measure the attributes they were looking for in real life humans.

They then measured a lot of stuff and ran factor analyses to find some fundamental ways that people can be. At least some of that is what we’d call a personality. They put these components into mathematical models along with some dependent variables to see what they could find out about personality.

Results!
The findings were breathtakingly clear. People who had what we’d describe as a generally optimistic attitude did better than those who were generally pessimistic in every part of their lives that psychologists bothered to check.

It’s hard to overstate how robust a result this was. There was no replication crisis. Happy optimists were dunking on grumpy pessimists in everything all the time in every way.

You may have heard this described as having a “positive mental attitude.”

With such an important finding — with the potential to improve life outcomes for so many — millions (if not billions) of dollars were spent trying to deliver the benefits of a positive mental attitude to those who lacked it. When I was in high school, there was even a for-a-grade class whose title was Positive Mental Attitude. It had an instructor, who was paid. It took place in a classroom. While the course was an elective, school itself is mandatory, and students enrolled but not attending could get in trouble for not attending. Parents could get in legal trouble.

You can guess how this turned out.

Much later, they could look at whether instilling a positive mental attitude in generally pessimistic people led to all the great outcomes that generally optimistic people were getting thanks to their optimism.

Thankfully we are much smarter now and never confuse causality.
Except, it seems like the same pattern happens with the same essential idea repeatedly.

Parallel studies of optimistic ideas
There’s the idea of locus of control originally produced by Rotter in 1954. It is an expectation held by a person as to whether something is generally under their control or determined by external factors. Are you the maker of your own affairs?

Self-efficacy is a later, but related concept, from Bandura, which refers to the degree of confidence a person has as to whether they can achieve a particular result.

These are old ideas, and they have been applied with some success to predicting whether people will be able to lose weight or quit smoking. Its impact reaches far beyond psychology.

For example, the single most influential theory in information technology management is the technology acceptance model, which hinges on self-efficacy. https://en.wikipedia.org/wiki/Technology_acceptance_model If people think that they are going to be able to easily use some sort of technology that is new to them, they are more likely to actually try using it. That may sound obvious, but predicting whether someone is actually going to use the technology you buy for millions of dollars is important enough that it was worth validating your intuitions about how people make decisions.

If you look at self-efficacy though and blur the details a bit, it’s hard not to look at it as another flavor of optimism. Someone with self-efficacy with respect to a new technology is optimistic about the likely outcome of their use. One might thus try to instill a positive attitude toward the technology in the hope that would increase the likelihood that people will give it a try.

People with growth mindsets believe that their efforts will produce returns. People with fixed mindsets do not.

More recent is Angela Duckworth’s popularization of grit. Grit refers to long-term dedication toward one’s goals despite difficulties encountered along the way. Its two main components are persevering effort and consistent interests.

To my knowledge, grit doesn’t blur into optimism as neatly as the previously discussed attributes. However, it’s not hard to imagine that someone who believes they will ultimately succeed will tend to exhibit grit with respect to their interests.

Currently, millions of dollars are being spent teaching kids about growth mindsets and grit in schools. The research-to-practice pipeline has shrunk dramatically. An idea can go from suggestive research study to Ted talk to elementary-school lesson plan in a few years.

Teaching the Growth Mindset and Grit 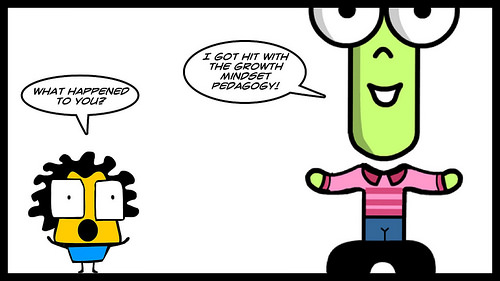 I’m not optimistic about the idea of explicitly teaching this set of ideas to children.

It isn’t that I don’t think a growth mindset is good. Clearly it is. And for a large set of things that you can learn, the growth mindset expectation happens to be true.

My issue with teaching a growth mindset is that it tries to teach explicitly that which is better left to children to validate and discover themselves.

Children can already tell when they are getting better at something. Whatever we tell them needs to be consistent with what they can see for themselves is actually happening.

Growth mindset exercises seem to produce some small, temporary effects, but ultimately, people will start to compare the expectations set by growth mindset proponents to what they are actually able to achieve.

You can’t lie to kids about what their efforts are doing for them. At least, not for very long. Eventually, you will be exposed.

The Alternative
I suggest we largely trust kids to determine whether the growth or fixed mindset is true for them in any particular domain. It can change over time. Recall that my daughter was first frustrated with biking and then later made rapid progress. I think this ended up being a better approach than trying to instill a growth mindset in her against her intuitions and lived experience.

I’m not saying we have to be wholly passive. We can build systems for them to see their own progress. Record or save their terrible beginnings so they can see their progression as they exert effort.