As you have seen if you read pretty much any mainstream US news source, Amazon recently announced that it would be building a second headquarters (HQ2) in North America. Pretty much every city of any size in the country has announced they’ll be preparing a proposal. One of my friends in Texas asserts that it’s a farce: that Amazon already picked Denver and is going through the motions to extract better incentive payments. Out of curiosity, I downloaded the request for proposals and the accompanying press release. I can see why my friend has her opinion.

The RFP included four major requirements for the site:

There are a number of things more vaguely described: a demonstrated ability to attract tech talent (software development in particular); communication and transportation infrastructure; the usual “quality of schools” and “quality of life” things. Everyone looking to relocate asks for those. The press release makes it pretty clear that Amazon will be seeding HQ2 with people from Seattle, and that they anticipate people voluntarily moving between Seattle and HQ2 as opportunities arise. Before looking at those five in detail, consider the very short fuse for responding. Denver can pretty much go down the list and check things off, which is suggestive of stacking the deck. Now to the specific five.

The Denver-Aurora-Lakewood metropolitan statistical area has an estimated population of 2.8 million people (2015). The larger Denver-Aurora combined statistical area’s estimated population is 3.5 million (2016). The entire Front Range is growing at an unpleasantly high rate (for those of us who already live here), driving up housing costs and raising the oft-repeated question, “But where will the water come from?” [1]. Spread out over a period of several years, even Amazon’s high-end estimate of 50,000 new jobs at HQ2 isn’t that big an increase compared to the current growth rate.

Denver International Airport (DIA) is the sixth busiest airport in the United States (metro Denver is only 19th by population among MSAs). There is nonstop service to (not an exhaustive list) Tokyo, Seoul, London, and Frankfurt. There are multiple daily nonstop flights to all of the US cities Amazon lists in the RFP. For domestic travel by the C-level executives, there are three general aviation airports in the metro area that already handle a heavy load of corporate jets. (Caveat: I don’t know if Amazon flies corporate jets for their executives or not; if not yet, I expect they will when there are two headquarters.)

Highway and mass-transit site access depends, of course, on the specific site. One candidate site in Denver is the Northfield business park associated with the redevelopment of the former Stapleton airport. Northfield’s web site indicates 1.2M square feet of office and retail space has already been developed but they have parcels as large as 70 acres still available. Northfield is bounded on the south side by Interstate 70 and is served by the Central Park light rail station. From Central Park, it is 15 minutes to Union Station in lower downtown (LoDo) and 24 minutes to the main terminal at DIA. While Northfield seems to me to be an obvious site, there are other possibilities located near other light rail stations and the interstates [2]. 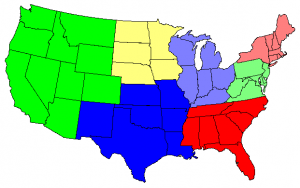 Regions based on author’s cluster analysis of interstate move data.

Finally, there is the issue of initial and ongoing relocations. Most analyses I’ve read essentially ignore this. First, I think Amazon will choose a state that is similar to Washington in its politics: blue or blue-leaning. Some of the things that might be factors include Medicaid expansion, marijuana status, vote by mail, etc. If that’s an accurate assessment, it eliminates cities such as Austin or Atlanta or Raleigh or Salt Lake City. Second, I occasionally play with interstate and inter-county migration data published by the Internal Revenue Service. One of the things I do is basic cluster analysis, grouping states using a distance measurement based on the percent of population that relocates between states. One of the outputs from that is a partition of the 48 contiguous states into seven [3] regions, shown in the figure to the left. The partition can be loosely described as “people tend to move more between states within these regions than to or from states in a different region”. There are lots of possible explanations for why these particular regions emerge. Some of it might be that people don’t want to move long distances. Some of it might be Big Sort kinds of cultural things. Some of it is definitely due to border cities: eg, Ohio and Kentucky get grouped largely because of Cincinnati. If the question “Where are our existing executives and managers likely to be willing to move?” this regional consideration may be important.

So, is my friend wrong that the game is rigged? There are lots of arguments for different cities if Amazon is going to be altruistic: dropping up to 50,000 tech and business jobs into Detroit would be enormously beneficial to that city. There are arguments for various cities if my relocation considerations aren’t important. But which cities are in a better situation to put together a short-fuse proposal based on the RFP and press release than Denver?

[1] The 2016-2017 water year has been somewhat wetter than usual, but not excessively so. It is also the first year that Denver Water’s new downstream reservoirs, intended to meet water calls from holders of more senior rights without tapping the traditional reservoir system, have been in full operation. With only about seven weeks left in the water year, the traditional water reservoir system is at 97% of capacity. Between conservation and improved management capability, Denver Water certainly appears to be doing well despite the massive growth in the customer base since the last of the traditional water reservoirs was constructed.

[2] Just as another example, one of my bicycling routes that goes east takes me close to the Gold Strike rail station on the Denver-Arvada boundary (shown while still under construction in the link). Across the tracks from the station is at least a couple hundred acres of semi-blighted area. But, it’s 15 minutes by rail to LoDo and three miles straight south on two major roads to the Highlands, which include a couple of Denver’s trendy neighborhoods that are rapidly gentrifying. Certainly it’s a candidate if Amazon decides to take a longer view or do a “distributed” campus.

[3] Seven regions is the largest number of regions that can be used without the software putting any single state in its own region. If it matters, the last state assigned to a multi-state region is New Mexico. Cluster analysis is more art than science.