The central theme of nearly all of the novels and short stories written by the late writer J.G. Ballard is the ways the collapse of civilization might open up new avenues for personal growth and liberation- the fruitful side of apocalypse. With a dogged and obsessive focus, Ballard explored this theme in terms of ecological collapse, technological dystopia, crime, sex, the “death of affect” and the psychopathology induced by modern lives of great boredom. What Ballard seemingly carried from his childhood, in Shanghai during the Japanese invasion of the Second World War, was a sense that madness lies close to the surface of bourgeois life ever ready to burst through the cheap stage sets we call “civilized order”. 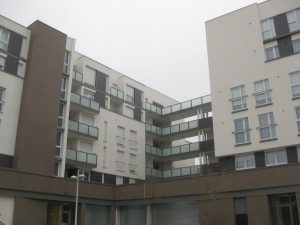 High Rise came third in a trilogy of novels dealing with the liberating potential of a new sort of urban alienation then coming into being. Crash explored the theme in terms of car crashes (and was itself turned into a film by David Cronenberg), while Concrete Island reset Robinson Crusoe on the plot of land betwixt and beneath highway overpasses. With High Rise, Ballard charted the new sorts of sociability and anti-sociability that might come out of the massive apartment blocks then arising in major cities as the social orders were becoming increasingly divided, isolated and hostile towards one another. Like many of Ballard’s books, High Rise features rich ideas, somewhat one-dimensional characters, surrealistic imagery, and a dark sense of humor. When things go wrong in Ballard’s books, they go very wrong.

It’s not his best book (to my mind, that would be The Unlimited Dream Company) but what the recent movie adaptation has done is to suggest that High Rise was much more prescient than I might have suspected, The filmmakers have made the interesting choice to set the film in 1975, when the book was published (and perhaps not coincidentally when Margaret Thatcher was first elected in Britain) to show the deeper roots of what might be described as a top-down engineered class warfare. The upper class (and upper floor) strivers who do combat with the rambunctious lower-floor agitators of Ballard’s fictional apartment block in hopes of instilling their own visions of order on a state of anarchy now seem like a metaphorical reflection of nascent neoliberalism and occupied Wall Streets. Perhaps Ballard, the so-called “seer of Shepperton”, was simply a little ahead of his time in envisioning a world to come.

Which is not to say we’re in the realm of social realism here. The slightly surreal, very strange story takes place in a massive Brutalist luxury apartment building planned by an aloof, slightly mad but visionary architect played by Jeremy Irons as a sort of social experiment. Everything is provided for the residents in the building, from gyms to grocery stores, and appears to be state of the art. Different social groups share the same building; the lower-classes are kept close to street level, while the wealthy live in the more-expensive higher floors with a penthouse for the architect and his wife and a roof maintained as a rustic estate complete with a white horse (who will eventually be eaten) and shepherdess costume in a clear nod to Marie Antoinette. Their last name is Royal, if the symbolism isn’t thick enough.

Into this posh hive flies a young doctor with no real attachments of affiliations, the sort of aloof observer at the center of all of Ballard’s work, played with the proper ironic detachment by Tom Hiddleston. Stranded about halfway up the building, he’s soon the plaything of socialites, an object of fascinated scorn for the upper class twits above him, and fascinated himself by the rabble-rousing documentarian below, played with the proper level of macho brio and sideburns by Luke Evans. The film does a good job of maintaining an atmosphere of tense strangeness and a sharp undercurrent of menace. With the social order of the building finally tips over into anarchy it’s not entirely a surprise.

It might have been rushed a bit however. The transition from the first half of the film to the second, from Apollonian order to Dionysian disorder, happens via an extended montage. We’re meant to believe that problems with the new building’s power failures and water shortages trigger the collapse of social norms as darker drives take over. Very soon the residents are beating each other senseless over groceries and engaging in wilder parties. The police seem basically uninterested (a clever joke I suspect about how much the wealthy can get away with) and the newly-savage residents keep going to work by day and engaging in orgies and bloody brawls by night. How the viewer takes this in all depends on how much reality they expect from their fiction. The tone is pitched somewhere between realism, satire, and rubber reality. So it’s perfectly Ballardian.

But does it get at any conceivable behavior? Should we expect the rich to mount raiding parties to lower income blocks when their champagne runs out? Certainly, it’s hard to wake up from this particular 70s dream to a world where the rich live in gated communities with private security forces and the poor in isolated fire traps and not think a bit of psychopathology and the old ultraviolence might be baked into the system. Working a blue collar job at an institution as intrinsically bourgeois as a university, I am very familiar with class resentments. However, classism seems to me to be something that moves with the most intensity directly downhill. Certainly, I have gotten occasional glares from random yuppie admins while doing my grubby work, but the people with a real axe to grind about cleaners are usually the secretaries. Meanwhile, my coworkers might snipe at “the rich” from time to time, but their deepest animosity is reserved for downtown panhandlers. Those directly below us on the social ladder are most often a source of anxiety and, thus, hostility. It’s easier to piss downwards than up.

To be fair, however, Ballard was British, the filmmakers are British, and this is a British movie. They have a far longer tradition of thinking about class than we do in North America, where we tend to view social class as a sort of temporary condition. Besides, Ballard’s work was always about uncovering the pathologies beneath our civilized behaviors. In the years since the book was written, the class system has proven to be sufficiently pathological in all reality.