Mitch Albom Is Offended By… Well… Everything

One of the more amusing genres of current media involves blaming millennials for everything. For example, millennials are currently killing bars of soap, the diamond industry, and wine corks. The monstrousness of these young people knows no bounds.

Articles like this are painfully useless. What we have here is a supply and demand problem: somebody somewhere is demanding articles telling them that somebody else is at fault for everything, and media is more than happy to provide articles describing that somebody else in excruciating detail. To that end, we have Mitch Albom‘s “Dropping kids off at college – then vs. now” a literal master class in one old person telling like-minded old people that everybody younger than them is the worst.

This, of course, is the content that some old people desperately crave. They simultaneously want to know that everything is awful and that they are not responsible for any of it. This mindset – which has existed since the first old person managed to live long enough to be properly described as an old person – goes a long way toward explaining so much of our current political and cultural situation. That current political and cultural situation runs rampant through Albom’s…uhh…thing that he wrote. Albom’s problem is that the world has had the audacity to change in a way that he apparently did not personally approve of.

To that end, he offers us numerous examples of what the world was like when he was younger versus how the world is now in the form of what it was like to be dropped off at college fifty years ago versus what it is like today.

OLD: “We drove our son to college today. What a proud moment. He was a little embarrassed by Mom and Dad coming up to his room, but we promised not to make any ‘square’ jokes. We unpacked his trunk and Mom helped organize his drawers. We met his roommate, who seemed nice. His name is Scott.”

NEW: “We drove our young prince to college today. What a proud moment. He was embarrassed by having his mom and step-dad and dad and former step-mom and dad’s current girlfriend all coming up to his room, so we had to watch from a distance. We saw him hook up his cable TV and his Xbox, then assemble his IKEA furniture. We also met his roommate, who seemed nice. Her name is X. And we are not supposed to use the word ‘her.’ ”

Back in Albom’s day, dads and moms stayed married, teenagers went by their full name, and there were only two genders. Now, dads and moms sometimes get divorced (but still support their children), teenagers sometimes shorten their names (think shortening Mitchell to Mitch, but different, oh, and scarier), and sometimes are disinterested in gendered expectations (like the one where women are liars, maybe). All of this is simply too much for Albom, in that he is being asked to do all of the following: accept that human relationships are complicated, use somebody’s preferred name, and to respect another human being’s very simple request.

OLD: “After helping our son hang two posters on his wall — Albert Einstein and a band called The Who — we went for a walk around campus. We saw the observatory, the mailroom and the student union. The cafeteria had a soft ice cream machine, which made our boy very happy! Dad took him aside and said, ‘Son, we know the drinking age is 18, but please, go easy on the beer. You don’t want to pass out on a fraternity’s lawn.’ ”

NEW: “After helping our son hang his flat screen and surround-sound speakers, we went for a walk around campus. We saw the 24-hour state-of-the-art exercise facility and the 24-hour Apple computer labs. He showed us the ‘safe spaces’ where no offensive words can be used, and the ‘healing spaces’ where you can go if you were accidentally exposed to an offensive sentence. There were seven cafeterias to pick from, so we chose the non-GMO, gluten-free, nut-free, dairy-free, vegan facility, which made our young person very happy. His nonbiological father took him aside and said, ‘Listen, friend, we know the drinking age is 21, but since you’re 18, please go easy on the beer. You don’t want to pass out in a hot tub and have it uploaded to YouTube.’ ”

It is tempting to address all four of these – the idea that somebody gets offended (like, actually offended) by the existence of literally deadly food allergies is truly jaw dropping (“Why, in my day, we just rubbed some dirt on our anaphylactic shock and walked it off!”), never mind getting bent out of shape about a stepfather accompanying a stepson to a college drop-off – but Albom’s reference to both “safe spaces” and “healing spaces” is particularly rich coming from the kind of old person who is deeply offended by Colin Kaepernick’s protests.

OLD: “We wanted to have ‘the talk’ with our son, make sure he wasn’t confused about the whole birds and the bees issue or its consequences. His mom told him she wouldn’t mind if he met a nice girl here, and if it was someone special, maybe she could come home with him for Thanksgiving. Dad took him aside and reminded him that he was here to study. After all, tuition costs $2,500 a year.

“Then, despite all that, Dad gave him a bottle of aftershave.”

NEW: “We wanted to have ‘the talk’ with our child, after he told us the hookup rate at his school was one of the highest in the nation. We toured the nearby Planned Parenthood office and the sexually transmitted disease clinic. His step-dad gave him a box of condoms, as did his mother. We were happy that his biological father reminded him that tuition, with room and board, was $70,000 a year. So it would be good if he studied once in a while.

“Happily, our young genius nodded repeatedly with his eyes closed. Then again, he was wearing headphones.”

“Back in my day, parents waited until their children were 18 to have a conversation with them regarding sexual activity. This was how it was meant to be, and nobody can possibly question the wisdom in having done things this way, nor is there any evidence to suggest that how we did things was actually considerably less effective than other ways of doing things…” 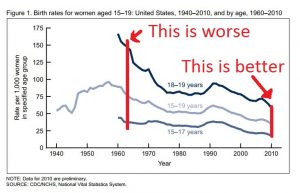 “…ah, well, yes, okay, but that doesn’t prove anything. Also, teaching children about avoiding STDs, and encouraging safe sex? NOT IN MY DAY MISTER! We pretended that people weren’t having sex and we liked it that way. And god only knows we didn’t learn anything during the 1980s and 1990s that might have forced us to confront our own opinion that safe sex is a laughable joke! We didn’t! Nothing happened in any of that time! Which is why we continue to rage about very simple concepts like making sex safer.”

OLD: “It was time to go. Mom gave her son a tight hug. She warned him to be careful with those protest marches against the war. And if he planned on letting his hair grow longer, please have it trimmed before coming home. ‘Don’t worry, Mom,’ he said. ‘I’ll be fine.’ Dad gave him a firm handshake and said, ‘Make us proud.’ ”

NEW: “It was time to go. Mom gave her child a tight hug. She told him to be careful because protests have become very heated, but he said, ‘As long as no fascist professors try to impose their belief systems and no non-authentic chefs try to cook my ethnic food — I’m cool.’ ”

One of the things that some members of today’s older generations like to tell themselves is that when they were protesting for things they believed deeply in, it was legitimate, but when young people today protest for things that they deeply believe in, it isn’t. This outlook ends up being a remarkably convenient thing, as it allows for these same old people to continue to believe that they are the only people on the entire planet who have any legitimate grievances. It is how, quite frankly, Albom can simultaneously decry Colin Kaepernick’s protesting for interfering with his precious football games, while also objecting to the idea that anybody anywhere would want to be able to go to a place where they were not forced to deal with things that they preferred not to.

Albom is not unique in being hostile toward other people (allegedly) wanting the same thing that he insists upon for himself. America’s ongoing generational conflict is fueled by older folks who insist that they are owed considerably more than they are willing to see anybody else receive, whether it is political considerations, various forms of social welfare, or, in Albom’s case, even the barest minimums of recognition and respect.

And unsaid in all of this is the thing that truly underpins all of this: it sucks being old. The truly embittered readers of Albom’s absurdist screed – the ones nodding along and going, “Yes, these millennials are terrible, whereas we are perfect in every imaginable way, and should frankly be thanked simply for even existing!” – are confusing having been younger once with the world having been a better place. Albom knows this, just as he knows that being 59 is worse than being 19. Rather than simply acknowledging this, he excoriates both 19-year-olds and their parents, not because they are any worse than they have ever been, but because surely things were better when he was 19 years old. They weren’t better though; he was just younger.

Unfortunately, nothing is going to the kill the “Young People Are Killing X” genre, owing to older consumers continuing to demand articles explaining why younger people are the problem. In another forty years, today’s millennials will be demanding their own accounting of the failings of young people. As it was is how it will always be. Perhaps then the best we can hope for is that, when those millennials are demanding such articles, they be at least willing to acknowledge their own unbelievable absurdity.