The Dark Knight Trilogy Rises Above All 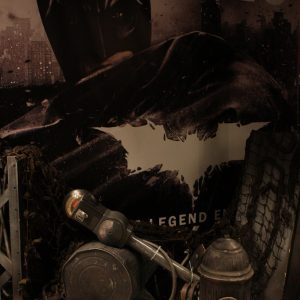 Christopher Nolan’s newest film, Dunkirk, has been praised by many critics as his best film to date. While it’s easy to see why Dunkirk has been a huge success – it’s beautifully shot and creates a seamless narrative flow with a very non-linear structure – it sits among the biggest outliers of the year at the box office. Four of the top ten domestic grossing films are superhero movies (Wonder Woman, Guardians of the Galaxy Vol. 2, Spider-Man: Homecoming, and Logan), with that total likely to be buoyed by the later-year releases of Thor: Ragnarok and Justice League. And yet, despite the critical acclaim Wonder Woman and Logan in particular have received, they still seem small in comparison to what many still consider the greatest superhero film of all time – Nolan’s 2008 masterpiece The Dark Knight. Nearly ten years later, superhero films are still trying to catch up to The Dark Knight, even as they adopt a franchise model thoroughly inconsistent with what made the Dark Knight trilogy so great.

It goes without saying that The Dark Knight is one of the best films ever made. What’s less often said that the Dark Knight trilogy – Batman Begins, The Dark Knight, and The Dark Knight Rises – is perhaps the greatest trilogy ever put to film. Begins is often ignored, having not reached the commercial success the two later films achieved; Rises is often nitpicked as an overlong mess. This is a shame because not only are those two films masterpieces, they are absolutely necessary to understand the journey Christopher Nolan created for Bruce Wayne.

Taking on Batman was a major risk for Nolan. Not only was Begins following the unprecedented failure of Batman and Robin, it was telling the complete origin story of Batman for the first time. How did he respond? By creating the best origin story of any superhero. Batman Begins boasts the greatest first hour in any superhero film. Everything about this opening works; every important area of Bruce Wayne’s life is shown in perfect length and detail – his childhood fear of bats, the death of his parents (and, most importantly, his relationship with them, especially his father), his “lost” years, his training with the League of Shadows, and his return to Gotham. This is presented in a non-linear narrative that is not only presented perfectly, but feels like the only way this story could ever be told. Just over an hour has passed by the time Bruce Wayne dons the cape and cowl and takes down mobster Carmine Falcone in his first act of vigilante justice, but you’ve learned and experienced more about the characters and world in that hour that some franchises explain over multiple films. While you can’t call a film about a rich orphan with military-grade vehicles and weapons who fights criminals in a bat costume realistic, you can call it grounded. Nolan understands that the presence of the superhuman is incompatible with this vision of Batman, so sticks to what is in the realm of possibility.

Being a formative film in the superhero genre, the second half isn’t quite as good; while still excellent, the parts with the Scarecrow are the weakest in the trilogy. The Scarecrow is, on paper, the perfect choice for a movie about fear, but the effects and evil scheme come off as a bit cartoony, although the final showdown with Ra’s al Ghul is fantastic. Whatever weakness is in the second half, Begins is still the definitive origin story, and sets up the themes that permeate the trilogy; Batman as a symbol of good to inspire a city and intimidate evil, the use of fear to subvert institutions and destroy civilizations, the question of if Gotham is truly worth saving, and Bruce Wayne’s struggle for his own identity.

There are few things I can say about The Dark Knight that haven’t been said before. It succeeds both as a superhero film and a crime epic, maintains an increasing pace throughout almost the entirety of its runtime, and has one of the best villains in modern film history. It succeeds at virtually everything it sets out to do. While it is possible to watch The Dark Knight without watching Begins, like many people have done, it is far more fulfilling to see it as the second stage in Bruce’s journey. The Dark Knight continues what Ra’s al Ghul set out to do in Begins; to prove Gotham is beyond saving. This time, the agent of destruction is the Joker, a nihilistic sociopath willing to murder people to prove a point – that everyone else is as evil as he is. While The Dark Knight might be the reason many subsequent films have adopted a “dark” and “realistic” tone, it is actually fairly optimistic – the Joker’s big plans almost completely fail, with the exception of his successful turning of Harvey Dent. While mankind might be generally good, individuals face a choice as to how to respond to adversity: this one common trait defines all of Batman’s enemies, and also defines his own choices. The real skepticism of The Dark Knight aims at our institutions, a perspective which seems almost precognitive given the recent rejection of the established political order in many western countries. Nolan’s trilogy is never dark for the sake of being dark, never edgy for the sake of being edgy.

The Dark Knight Rises is perhaps the most polarizing film in the trilogy. It is the lengthiest one, the most epic in scope, and the riskiest as well. The film skips eight years following The Dark Knight, and Batman only appears in costume for a little over 21 minutes – around 13% of the screen time. While some have criticized certain plot elements, I find the vast majority of complaints to be nitpicking: like Dunkirk, Rises is cinema at its finest. After a steady opening, it gradually becomes relentless in pace – this film does not feel like it is as long as it is, and that’s a good thing. Bane is the perfect villain as Bruce Wayne’s final test: a physical powerhouse that even Batman in his prime would have struggled against, let alone a shell of his former self. Catwoman can easily fall into fanservice territory, but Nolan’s Selina Kyle is a fully-realized version of the character. The ties to the first two films are constant and meaningful: the metaphorical ghosts of Ra’s al Ghul return, to finish his work, and the institutions Batman worked to protect, and ultimately lied to preserve, inevitably collapse. Peace is only restored after Batman adopts his rightful place, like Ra’s al Ghul; an idea that lives beyond death. Nolan’s vision of Batman is truly the only superhero to experience a complete arc, from beginning to end – and there is no better way he could have ended it. The criticisms of Rises tend to be menial – the muffled voice of Bane, the reveal of Talia al Ghul as the true mastermind, or how Bruce Wayne is able to survive what should have been his death – but these are nitpicks in the most precise sense of the word. When examined as a pure work of cinema, The Dark Knight Rises is everything you could ever want.

With those three films individually out of the way, what exactly did Nolan do that so many others have tried (and failed) to accomplish? He had a compelling vision of virtually every character he placed in his films. His direction is noticeable and unimpeachable, being both recognizably Nolan and recognizably Batman. The tone of his films is never gratuitously dark, but is only as dark as it needs to be. Perhaps the biggest issue with post-Dark Knight superhero films is the lack of truly compelling villains – they lack a true personal connection or truly contrasting and disturbing worldview like R’as al Ghul, the Joker, or Bane. A step in the right direction was the recent version of the Vulture in Spider-Man: Homecoming, perhaps the best villain in a Marvel film since Doc Ock in Spider-Man 2, but even otherwise excellent films like Wonder Woman and Logan have suffered from having a relatively weak villain. With the modern focus on big-budget superhero films setting up sequels and team movies – which are fine in their own right – filmmakers have lost a bit of what made the Dark Knight trilogy so great.  However, the lessons Nolan provided in making an effective superhero film are still out in the open, waiting to be learned.