Could we be looking at a subprime credit crisis for cars?

Few things capture this phenomenon like the partnership between Fiat Chrysler Automobiles NV and Banco Santander SA. Since 2013, as U.S. car sales soared, the two have built one of the industry’s most powerful subprime machines.

Details of that relationship, pieced together from court documents, regulatory filings and interviews with industry insiders, lay bare some of the excesses of today’s subprime auto boom. Wall Street has rewarded lax lending standards that let people get loans without anyone verifying incomes or job histories. For instance, Santander recently vetted incomes on fewer than one out of every 10 loans packaged into $1 billion of bonds, according to Moody’s Investors Service. The largest portion were for Chrysler vehicles.

Some of their dealers, meantime, gamed the loan application process so low-income borrowers could drive off in new cars, state prosecutors said in court documents. 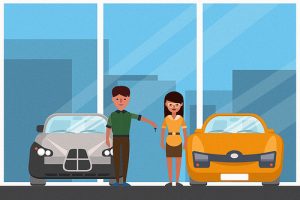 Some of these stories are pretty disturbing, and familiar. Especially the bundling and flipping part and the act of putting people in products they cannot afford.

For the housing crisis, I believed that there was a lot of blame to go around. From a criminal standpoint, the guts of it was the actual fraud, lying about incomes and then bundling and flipping the loans under unreasonably optimistic ratings. The primary victims were the investors who bought them, the taxpayers who ultimately had to bail them out, and homeowners who saw the value of their houses plummet. On the one hand, I do believe that if we were going to bail out anyone, more of that should have gone with the borrowers. On the other hand, there are limits to the extent that I consider most of the borrowers themselves to be victims.

The two points of hesitation I have with my moralism are that they existed within a particular culture, and that culture told them that buying a house was supposed to be a no-lose proposition. They believed that if they could just get into the house, everything would work itself out. They’d get a raise, they’d be able to refinance, they’d be able to sell the house. The second is that they were caught on the same treadmill as other homeowners. Even if they didn’t want an especially large or grandiose house, they were competing against other buyers and this was driving up prices where even more modest homes were immodestly priced.

In addition to likely having a lesser effect on the economy as a whole, I am less worried about an auto loan bubble because a lot of these dynamics don’t really apply. Anyone engaging in fraud ought to be prosecuted to the fullest extent of the law. If we have to bail out certain institutions or even borrowers to prevent a chain reaction, then I guess we should (though it seems less likely). Beyond that, though, there are some definite differences in the circumstances that leave me less sympathetic to the car buyers than I was towards the home buyers.

Most notably, the cost of a home is dependent largely (though not entirely) on the actions of others. How much you spend on a house has less to do with what kind of house you want and more to do with where you want to live. We do have some discretion over where we choose to live, but it’s certainly limited. So if your job offer was in California during the real estate run, what were you supposed to do? Move? Well, I have been known to advocate that very thing, but it’s not the solution for everybody.

With cars, if it comes to not being able to afford the car you want, the easiest thing to do is get a less expensive car. The price of a car is infinitely variable. You can spend as little as a few hundred dollars, or as much as several tens of thousands, or even more. The likelihood is therefore a lot higher that if you bought more car than you could afford, that’s a decision that you made. And unlike houses, it’s far less likely you were caught up in a substantial bidding war. The costs of used cars has been volatile in the past, but nowhere near the degree to which housing has.

The counterargument is that most housing performs is core function – a roof over our heads – competently whether upscale or downscale. The same can’t be said of cars. You can tell someone to get a smaller house or apartment and they will more likely just live in a place that’s smaller. I mean, there are other drawbacks like crime and schools, but the house is less likely to completely break down the way a car might. Telling someone to get a cheaper car literally means telling someone to get a car less likely to perform its core function, more likely to make them miss work or other important engagements, and so on. And while we have homeless shelters, we don’t do the same for transportation.

In that vein, I suppose I would need to know more about the loans being made. My bias is that I’ve known a lot more people being unwise in their purchase of automobiles than housing or virtually anything else besides technology or, occasionally, clothes. So I’m imagining people that ought to have purchased a car for a couple thousand instead getting a loan for eight thousand or even buying new. If it’s people who can’t pay the couple thousand dollars they need in the first place, then it is more difficult to blame them for not optimistically pouncing on any loan they can find.