The Virtue of Signalling

Many words have been spent on blogs and social media criticizing individuals for engaging in “virtue signaling.” I will take James Bartholomew at his word that he is the creator of this phrase, and who wrote in The Spectator that he “coined the phrase [in a previous article in which he] described the way in which many people say or write things to indicate that they are virtuous…One of the crucial aspects of virtue signaling is that it does not require actually doing anything virtuous.”

There is an easy aspect of this to dispense with, and I note that to the extent Bartholomew and others condemn actual virtue signaling (as defined above) where it occurs, they are correct to do so. Virtue signaling is simply a subset of something which has gone under another name and which has been present since at least The Fall. In Mere Christianity, C.S. Lewis explains the rationale for the Christian commandment against judgment, aside from opening one’s self to a fair charge of hypocrisy, as thus:

“Human beings judge one another by their external actions. God judges them by their moral choices. When a neurotic who has a pathological horror of cats forces himself to pick up a cat for some good reason, it is quite possible that in God’s eyes he has shown more courage than a healthy man may have shown in winning the V.C. When a man who has been perverted from his youth and taught that cruelty is the right thing does some tiny little kindness, or refrains from some cruelty he might have committed, and thereby, perhaps, risks being sneered at by his companions, he may, in God’s eyes, be doing more than you and I would do if we gave up life itself for a friend.

“It is as well to put this the other way round. Some of us who seem quite nice people may, in fact, have made so little use of a good heredity and good upbringing that we are really worse than those whom we regard as fiends. Can we be quite certain how we should have behaved if we had been saddled with the psychological outfit, and then with the bad upbringing, and then with the power, say, of Himmler? That is why Christians are told not to judge. We see only the results which a man’s choices make out of his raw material. But God does not judge him on the raw material at all, but on what he has done with it. Most of the man’s psychological makeup is probably due to his body: when his body dies all that will fall off him, and the real central man, the thing that chose, that made the best or worst out of this material, will stand naked.” 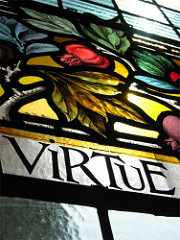 Lewis’s point here stands regardless of whether a person accepts it as the ultimate rationale for Matthew 7:1 or whether one comes from any particular faith background whatsoever. The decisions we make occur within a certain framework, and evaluating the moral blameworthiness or praiseworthiness of a person’s decisions in light of the differing frameworks we all come from, which presupposes a full knowledge of the Moral Law, is something we are not capable of competently doing. I am not here yielding to determinism, which I reject, nor am I saying that as a society we should not punish people for committing certain actions because we are unable to adequately weigh moral blame, both of which are separate topics. Instead, the point is that the same practical reason that Lewis outlines regarding the limits of our ability to judge others should also counsel us to be wary of assigning great moral praiseworthiness to our own good actions and declaring ourselves as virtuous. Virtue signaling then, is both a form of the sin of pride, and separately, we are not particularly good arbiters of our own (or others’) ultimate virtuousness. Let us be done with it then.

There is something else, however, that has also made its way into our recent discourse. It disguises itself as condemning virtue signaling, but in reality it condemns virtue itself. Indeed, nearly every time I read someone’s post or tweet condemning another’s response on social media as “virtue signaling,” there is no indication that the individual so accused is trying to signal to everyone else about how virtuous he or she is, rather than (A) being sincerely empathetic to another’s pain; or (B) showing sincere moral outrage at something wrong; neither of such responses are claims of one’s own virtue, but instead are a defense of virtue.

We are a broken world. Children are starving. Dictators torture and kill the innocent. There is poverty, homeless, addiction, and despair. The horrors of war. We treat human lives in their earliest stages as disposable. We don’t love one another the way we ought to. There are reminders all around us of our own moral failures. And at the same time, what signal are we sending to the next generation? When we elevate people, whether in business, politics, the arts, or whatever, who are we lifting up? What qualities are we emphasizing in doing so? I agree that we should not be signaling about our own virtue; but I humbly submit that signaling about the importance of virtue is as necessary as ever.