This is a sequel to my post last fall of 19th century advertisements, because they are fun.

With further ado conspicuous by its absence, we dive right in with ads from the 1880’s. On the right we see theater listings. 1 I appreciate that the Chicago Opera House uses the claim of being fireproof as a marketing tool, but I particularly like that Jerusalem on the Day of the Crucifixion is sandwiched between a comedy act by Louise Litta and Edward C. Dobson, the Banjo King;  and the Imperial Japanese Troupe doing The Royal Mikado Novelty Co.  Gilbert and Sullivan were all the rage at this time.  My guess is that The Royal Mikado Novelty Co. is a third-rate knock-off.  I’m going with the Banjo King.

Next, below, we have a typical example of the genre of the liquor ad pretending it is a pharmaceutical ad: 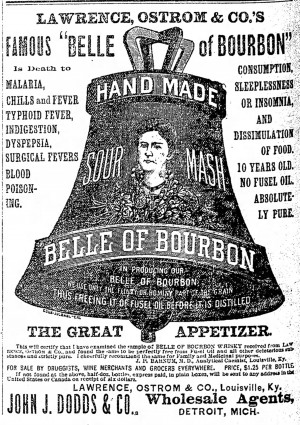 Should you feel a bout of consumption coming on, you know where to go.  I do appreciate the assurance that there is no fusel oil.  It adds a touch of class.

Keeping with the pharmaceutical theme, as well as my firm conviction that no compilation of 19th century advertisements is complete without some quack medical device, and in the spirit of offering something to the ladies, I present Bradfield’s Female Regulator: 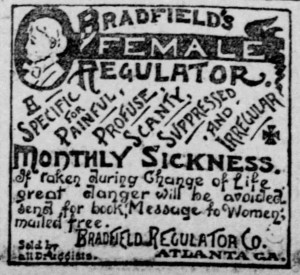 I can only speculate what this actually is.  In any case, it is impressively all-encompassing of female troubles, so let’s not hear any more complaining, dears.

So far these have been fairly subdued.  Suffer no longer: 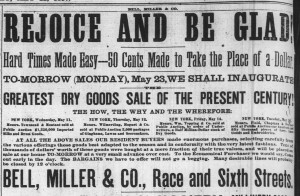 I appreciate an adman who can get this excited over dry goods.  Keeping with that theme: 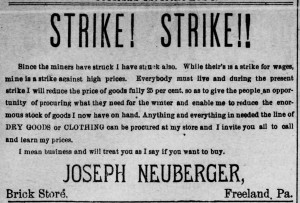 This is not quite the classic “Richmond has fallen, and so have our prices” ad, but it is in the same spirit.  From here it is but a short step to a modern favorite, the cheesy appropriation of patriotism for commercial gain: 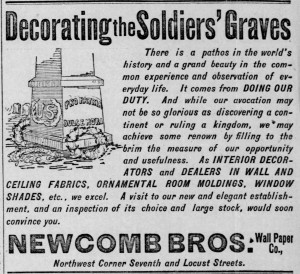 It’s hard to beat that for sheer tackiness, but I leave you with this final one that easily takes the prize for weirdness.  The print comes out here pretty small, but if you burrow down deep enough it turns out that this is an ad for reduced railroad fares: 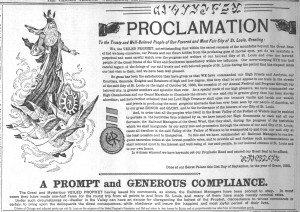