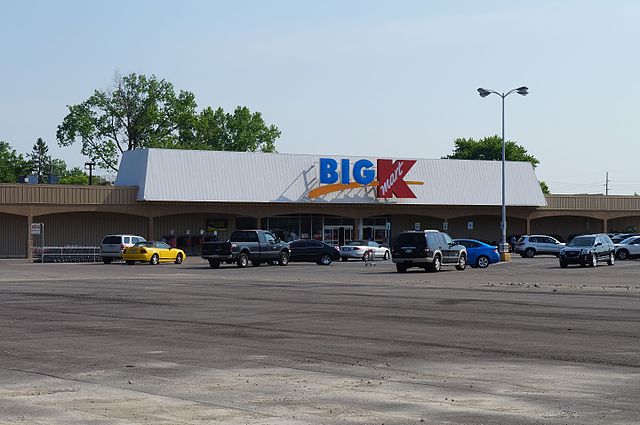 The first Kmart in Garden City, Michigan. Opened in 1962, this location closed in early 2017. Photo by PeRshGo.

Anyone that grew up in Michigan in the 1970s and 80s now lives with ghosts and zombies. No, there wasn’t a zombie apocalypse in Detroit, but if you were like me and grew up in towns like Flint or Detroit or Saginaw, you know what your hometown was like in the 70s and how it all started going south in the 1980s. The auto industry was king in most of Southern and Central Michigan, but when changes in the industry hit, factories closed and businesses moved away. We were left with ghosts of a former past and a desire, a hope, that the good days could come back if we just did whatever we were supposed to do to make them come back.

My hometown of Flint is now known for the ongoing water crisis, but before that debacle, it was known as a town that was built by GM. In the good days, the 1970s, some 80,000 people worked for General Motors. Today, that number is around 8,000. Such changes tend to make a town like Flint a ghost of its former self.

So if you are from Michigan, you are used to living with ghosts. But seeing the ghosts is not easy. It means seeing what they are now and remembering what they once were.

During those good days in the 1970s, one of the places that we went to go shopping was Kmart. Started in 1962 (which happens to be the same year both WalMart and Target were started), the retailer was based in Troy, Michigan in its heyday. The seventies were a time when people were budget-conscious and those on a budget went to Kmart. I remember that the stores used to have a deli that was usually in the middle of the store. I would sometimes wrangle my parents to take me to the deli to have their deli sandwiches. I liked them because they were round, and had a certain tangy taste.

Kmart wasn’t fancy, but it was the place all Michiganders went to. WalMart and Target were not yet the giants they are now, and Kmart became America’s discounted place to shop.

At some point, maybe in the mid-80s, my parents and I stopped going to Kmart. So did a lot of other folks. It was no longer the go-to place anymore. My guess is that they stopped innovating, and that allowed WalMart and Target to pass Kmart by. At some point, Kmart became a place that one associated with, well, junk. I remember in the late 90s, I stopped at a store in St. Paul. I needed an air conditioner and found one for a low price. I took it home ready to enjoy cool air and…nothing happened. The air conditioner didn’t work. I had to return it. Kmart was losing its game. It was fast becoming a has-been in the retail scene.

In 2002, Kmart declared bankruptcy and started closing some stores. This was a sign of what would happen in the future.

Market forces and a lack of innovation are what started Kmart on its slide towards irrelevance. But what has turned it into a zombie was one man: Eddie Lampert.

Lampert was born the same year Kmart started: 1962. The CEO of a hedge fund, he bought Kmart in the mid-aughts and then merged it with another struggling retailer, Sears. What has happened since is hard to watch: more and more stores closing, the selling off of valuable parts of the merged company and little if any money put into revising the aging stores. Most companies would have sacked a CEO that hasn’t turned a profit since 2010 and who will go down in history for wrecking not one, but two storied brands. But he remains the captain of the retail Titanic as it continues to sink.

There may be a reason that he is still in charge: he might be able to cash in on Sears and Kmart’s slow demise. In March CNBC reported the following:

USA TODAY estimates that the value of Lampert’s Sears stock has declined by roughly $519 million since the end of 2014. That estimate was derived by calculating the value of his Sears holdings at the end of each year since 2010, using Sears closing stock price for the year and the number of shares Lampert owned at the time, culled from S&P Global Market Intelligence data. Using that methodology, the highest year-end value of Lampert’s Sears holdings was $760.3 million.

But Lampert won’t lose it all.

“If they go bankrupt, he remains in control of the company because, though he loses his equity stake, he’s their principal creditor,” former Sears Canada CEO and Columbia Business School Professor Mark Cohen said in an interview. But Lampert has cordoned “off an enormous amount of assets through the loans he’s made, which have essentially protected him from what is eventually (going to) occur.”

He has spun off divisions, provided secured financing in exchange for real estate collateral and transferring valuable properties to an investment trust, all while retaining ownership stakes in those assets.(emphasis mine)

He sells a part of the retailing giant and still retains ownership, meaning more money. The article goes on to list the sales:

Here’s how Lampert has retained assets even as Sears has shriveled:

•Lands’ End: Sears spun off retailer Lands’ End in 2014, but Lampert’s hedge fund owns 59% of the company. That stake was worth nearly $360 million as of Wednesday morning.

•Real estate: Sears sold 235 store properties and its interest in another 31 properties to a newly formed real estate investment trust (REIT) called Seritage Growth Properties for $2.7 billion in 2015. The deal gave Seritage control of some of Sears’ best properties in a sale-leaseback transaction. Lampert’s ESL owns 43.5% of the limited partnership units of Seritage and 7.9% of the REIT’s voting power.

The move was similar to transactions favored by investors in legacy retailers whose real estate is considered more valuable than their actual business.

Other news outlets, such as the New York Post, report the same thing: Lampert is stripping the company of its assets and also making sure he makes something off the demise of Sears and Kmart.

I don’t want to say that Kmart would be doing well had it never been purchased by Lampert; as I’ve said already, Kmart (and Sears) were already struggling. I would go further and say that the two retailers probably would have closed up shop anyway without Lampert. But Lampert is killing off the two stores by a thousand paper cuts, little by little. The stores look shabbier and shabbier and more and more stores close, and more parts of the company are sold off. It would be better if the stores just closed all at once, but that would probably not benefit Lampert. So what we have is this slow death, where Kmart especially has become a zombie, shambling through the retail market, slowly disintegrating.

I wish at times that someone would come in and save Kmart. Kmart Australia is owned separately from Kmart and is doing great down under. At one point, it was also struggling, but it has made a turnaround. The chain was bought in 2007 by Wesfarmers, who brought in the former head of McDonald’s in Australia to turn things around. And he did:

Russo has slashed stock, reduced prices, closed warehouses, de-cluttered stores and urged staff to smile. In the year to June 30, Kmart lifted earnings by 80 per cent, to $196 million, and Wesfarmers managing director Richard Goyder noted that Kmart had “made good progress in executing its strategic plan”. After a decade of neglect under Coles-Myer’s ownership, the Kmart “ugly duckling” is not yet a swan, but it’s looking a lot prettier than before.

I wish that Wesfarmers would swoop in and save Kmart here in America. Maybe under an owner that really cares it could be saved and thrive.

I know that it is probably a dream to think that Wesfarmers could come in and revive Kmart. After all, other well-known discount stores have suffered a similar fate. Woolco, Zayre, Ames, all of these were at times giants in the discount retail industry and are now just a memory.  That said it is hard for this native Michigander to see a Michigan-based company go down like this.

Kmart deserves either a good death or second chance at retail life. But looks more and more that it will get neither and that’s a shame.