This is one of those moments I kinda wish I had played these games chronologically. Maybe that would have shown me true gems ahead of their time. Instead, you fine people get baseball and loads of it. It’s kinda fun this way too, just to see how these things stack up against each other. 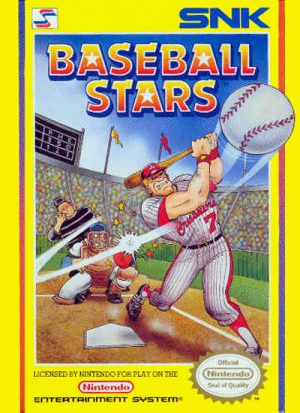 Baseball Stars is a game I heard about way after the fact. I always thought Baseball Simulator 1.000 was the end all be all of baseball games because of the flexibility and creation tools. I had no idea, that in the same year, 1989, there was another game made by SNK (Neo-Geo developers) that was very nearly just as good. I say very nearly because that’s the feeling I had when I walked away from playing this. There are some amazing elements, ones that blow 1.000 out of the water, and it has all the gameplay I would expect and yet…I find myself underwhelmed. There’s the creation mode: amazing, look how long you can make the name! Look how you can choose from a few different icons for your team! I could make my team name “Portland Hipsters” and I didn’t have to edit anything out. But as soon as you start playing your team name gets relegated to a two-letter abbreviation. Kinda lame. You can make a “league” of either 2 teams or 3 games which I’m still not exactly sure what that means. But as far as I can tell, there’s nothing that allows you to have a full-out league play (I’m wrong, see Edit) Which I find a little odd and a little undermining after introducing all these amazing features.There is an odd VS. mode that can allow you to play up to 125 games, but it doesn’t keep track of league leaders or wins or losses, just money. I understand that making your players by buying stats is an interesting feature. But the whole thing feels like a beefed up arcade game: but that’s exactly what it is. The actual gameplay, while having good animations and fairly smooth mechanics, does nothing really to set itself apart from the pack of similar games. The throwing seems even slower than I’m used to, the fly ball system is hard to gauge (but what else is new) and the usual oddities from other games are present here as well (why can’t I move my second baseman to the left more on routine ground balls!). This feels like a nearly-there effort. There is a depth here, but it’s mismanaged. I’m hoping the second iteration of this game takes everything this one succeeds in and perfects the package. Try it! Edit: I realize I’m dumb now, and didn’t move the counter up to make a more exciting league. I think for me this changes everything. You can see top batting averages, home runs, RBIs, Top ERA, wins and saves. I’m even going to go so far as to change my review to a very strong Play it! Though I must say it’s sad to not see the full team names displayed at any moment. I almost feel like it’s not even necessary to have it, if you never see it. But, it beats having an “E” in front of every team you make, and with that you can only make 6 teams. That being BS 1.000. I’d give this that extra good rating of Play it now! except that I still can’t see myself switching over to this experience. There’s not enough  razamatazz to the actual game to warrant a complete embrace. Yeah, I said razamatazz. I’m not even going to spell check it. 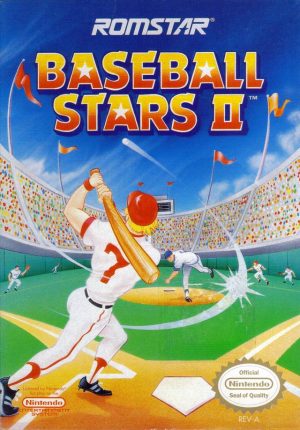 Baseball Stars 2 makes me angry. I really don’t understand. From the beginning, things look a little more snappy and snazzy. The menus are damn near identical. League Play, VS, all here. But what’s this? You can’t create player names or team names now. What? I’m really scratching my head here. The gameplay is nearly identical to the first game. There are some small tweaks like better home run animations and such, but who the heck cares when the main staple, the main reason people were stoked about this series to begin with is conspicuously absent. What is the point of this? Money-grubbing? I’ve seen games that don’t seem to add much to the mix in their sequels, but this is truly puzzling. You can shift your defenses, bunting is easier, so what. You had me at character creation and lost me immediately when that went away. I don’t really have much care for the money aspect of the game, but it seems like SNK just ran the wrong direction with this. I wish I had more to say about it, but I’m just bummed.Avoid it! 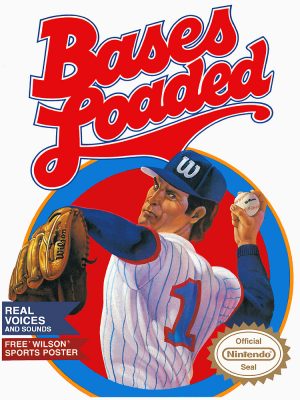 Bases Loaded: feels strange to see that it came out in 1988, when it feels like it’s been around forever. It feels dated and yet trying to break the mold in certain respects. The strange angled perspective has always been a divisive inclusion and it’s one I don’t believe they shy away from in later games. (My play-throughs of II-IV are forthcoming next week. I’m sure everyone will be on the edge of their seats waiting for that.) From the beginning, this game feels dated. There’s no slick to the menus, you have to hit “select” to choose from pennant or vs play. Everything is fairly minimal. It’s not bad-looking, just minimal. The actual gameplay is interesting to say the least. It’s more of a 3D view of baseball, meant to mimic actually watching a real game. You can swing up or down or left or right, with the catcher’s mitt being the only way to see the path of the ball. It takes some getting used to, but I frustratingly found it nearly impossible to hit with much accuracy. Fielding feels like a beta version of what other baseball games already had in place. It feels like an updated Atari title with how the players move, and their general look, though definitely updated. Also on display is the constant Safe! or Out! voices from the umpires. While it may have been cool in the day, it feels like I’m playing the equivalent of a Pole Position, where the scratchy “Start your engines!” passes for high-tech. I have a feeling there are some die-hard fans out there, especially since 4 iterations of this game came and went. It’s obvious they were going for a pure baseball simulation here: no other baseball game I’ve played has been this slow-paced. They actually toss the ball back to the pitcher. They show the players start to leave the field before the scoreboard is shown. I appreciated how much tighter the timing was in other baseball games. I’m hoping by IV, maybe all the kinks are worked out and some nice interesting features are put into play. So far, not all that impressed, Jaleco. Avoid it!