When I started writing this, I was still radioactive enough to trigger the TSA’s sensors at major airports. The day before I had a “nuclear” stress test to determine – or at least rule out possibilities – why my blood pressure has been doing erratic things. While the technician was injecting me with the technetium-99m compound used for heart imaging, she mentioned that its half-life was six hours. I asked her how they maintained their supplies of a compound with a half-life that short. While I got the expected reasonably simple technical answer, I also got an unexpected tirade about the state of things nuclear in the US. 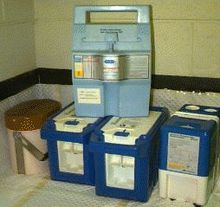 The technical answer is a Tc-99m generator (examples shown to the left), which Wikipedia tells me is often referred to as a “moly cow”. The generator contains a solution of molybdenum-99. Mo-99 is radioactive with a half-life of 66 hours and decays into Tc-99m. Nuclear medicine facilities like the one I was at extract the Tc-99m using a chemical process and combine it with a molecule that binds to the Tc-99m. When the Tc-99m compound circulates in the bloodstream the other end of the molecule binds to tissue in the target organ. The Tc-99m decays to Tc-99, emitting gamma rays that can be detected by an appropriate camera. After a batch of computer processing, the result is the kind of colorful images shown on the front page.

Then I got a lecture about the sources for the generators used in the US. Mo-99 is most commonly produced in the necessary quantities by exposing highly-enriched uranium targets to high neutron fluxes in research reactors. US supplies used to be produced in a reactor in upstate New York. After that reactor was shut down – leaks, cracks in the foundation – North American supplies of Mo-99 came from a 60-year-old Canadian reactor. That reactor has been shut down off and on for various problems over the last ten years and is scheduled to be fully decommissioned in 2018. Because of the Canadian situation, the hospital where my imaging was done has already switched to European suppliers. The European reactor that provides the bulk of their Mo-99 is also old and is scheduled to stop production around 2020. In fact, almost all of the world’s Mo-99 comes from aging reactors scheduled to be shut down over the next several years.

The tech blamed the lack of a US supply on the owner/operators of US commercial power reactors. Since Three Mile Island, she said, there has been a steady string of small leaks and other problems at the power reactors, fueling the public’s mistrust of reactors generally. In her opinion, that mistrust is what makes it impossible for a private entity to get the necessary liability insurance to construct a new reactor and processing facility of sufficient size to meet the US demand for medical imaging. A variety of non-reactor technologies for producing Mo-99 have been proposed, but those remain laboratory-scale devices.

Myself, I think it’s part of a quite different story. The US – meaning the collective we, the public we – have become very bad at maintaining public infrastructure. I use infrastructure broadly: there are several hundred combined sanitary/storm sewer systems that regularly dump raw sewage into waterways still in service; roads all over the country are falling apart; we lack the ability to put humans into LEO. A small reactor or two for producing medical radioisotopes is just another form of public infrastructure: all of the US, Canadian, and European reactors mentioned above were built with government dollars.

I’m not as much of a pessimist about complexity as Joseph Tainter or John Michael Greer. Still, added complexity inevitably comes with a maintenance cost. The collective we seem to be less and less willing to pay those costs, at least in the US. This trend is one of the reasons for my pessimism about the long-term future of the electric grid(s): unless we get the complexity and maintenance right the first time in the face of various demands – e.g., dealing with the consequences of coal – we may not be able to pay for correcting mistakes.