I am back! I took an unexpected week off from my article to focus on some personal things and now I feel better than ever and ready to get back into the swing of things: very literally.

This week marks the opening of the 2017 MLB season, so it seems only appropriate that all the games I’m playing this week are baseball related. I recently renewed my interest in baseball and follow my home team, the Houston Astros. Baseball video games were always of interest to me: I recall attempting subterfuge to “find” money that my friend had for a game we both wanted, which is actually one of the titles I am playing this week. I can’t remember why we had to plan such an elaborate ruse (which involved “finding” a wallet in the street with cash in it, which is a bizarre idea) to buy Baseball Simulator 1.000, but the need was there due to one very big factor: you could create your own team, your own players. Sadly, this is a feature I don’t often see being a major aspect of many sports games today, though I know you can create some players and teams in at least the one baseball game I’m playing now (the only baseball game it seems) called MLB The Show. Interestingly enough, that game features a retro mode which mimics a lot of the gameplay mechanics of the games of yesteryear. I hope that the same idea will be applied to Madden next year so we can have something very much like Tecmo Bowl, but since it’s separate developers, seems likely a pipe dream. 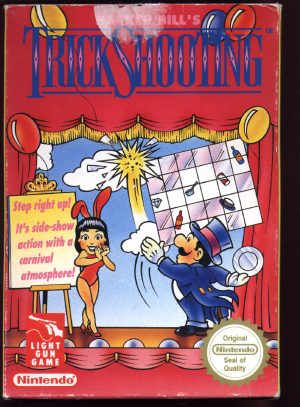 The first of the titles I played this week actually had nothing to do with baseball. It was Barker Bill’s Trick Shooting. I never had another game that utilized the awesome zapper (I have the original grey one, thank you very much), so it was nice to be able to break that puppy out for a little while and recall the arm fatigue and general malaise that set in after a few minutes of playing. There are 4 different stages, or really 3 different stages and one made up of all of them in a round robin. You can fire your gun at: balloons, dishes and random falling objects through window panes (but you can’t even break the windows! What gives?). While everything was clear and well-presented (I see you, cute bunny hat girl), at the end of the day it was still just shooting things. I think gun games really came into their own with the concept of the rail shooter, but that was a bit beyond the capacities of the NES. After only a short time, I started regretting I wasn’t a worse shot and started missing on purpose to end the round faster. Even the Duck Hunt dog makes an appearance, which gives you that ability everyone always wanted: you can shoot them, although you lose points doing so. The float graphics for the balloons were fun at least and I had no issue with the game overall. I just have a hard time recommending something that has this little variety. I suppose with the very limited run of zapper games, it may be worth your time to play this. I wonder if this, among other similar titles that lack depth, cost less than your average game, much like the shovelware of today. Either way, I’d say: Try it! 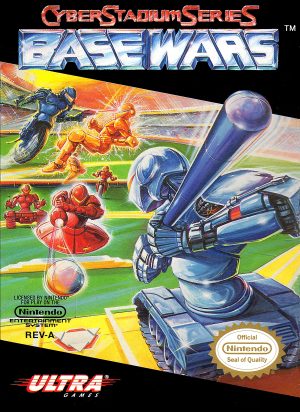 First in the small run of baseball games this week (and believe me, there are many, many more) was a little title from Ultra (see: Konami) Games called Cyber Stadium Series: Base Wars. This game is immediately cool from the start with the use of robots. It’s just like any number of baseball games you might have played on NES, but way cooler because of this. You can even create teams and players’ names. Your team is made up of different kinds of robots with different abilities and instead of throwing the ball around, you kind of shoot the ball to your teammates. I was immediately smiling, wondering where this game had been all my life. The graphics, while merely functional in the fielding, really shine in the batting (where the most important graphics were always judged for me). You could always tell when a game was ahead of its time when the batting graphics looked amazing. Strangely, there is a lag for fly balls and other such outfield hits, and it makes it nearly impossible to see where your players are as the screen struggles to catch up to the action. There is a pennant mode with 12 teams (all of which are editable). Strangely, there is a Texas team and a Houston team, which would be fine if there were more teams. I guess I can’t complain seeing as I am from Texas, but it’s still odd. You can even change the name of the league itself (and strangely, the owner’s name?), which is more than I can say for other games that feature creation. What’s even more bizarre and amazing is there is a parts shop where you can get upgrades for your players. There, a freakishly cool hologram head oversees your choices: repair, shop or look at data. You can upgrade weapons (!), how well they catch, how well they shoot, something with units and shoulders, but I’m a little unsure what that all means. I think overall it means this game is deep and amazing. It came out 1991, right at the end of the NES life-cycle and it definitely feels like an elite title, especially for sports. If my friends had found this first, who knows what we might have played more. Play it now! 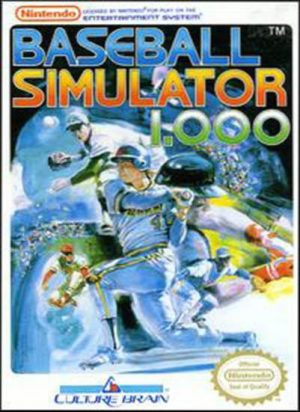 Baseball Simulator 1.000. This game, as mentioned above, is one of my all-time favorites growing up. When my friend and I obtained this, it became our lives for a good summer or two back in middle school. We created teams and played seasons (of 60+ games) and sang the little songs they played in the background and took everything this game had to offer. Well, mostly. You can create 6 teams and play a league with them involved as well as others. The editing mechanic was regulated by a point system, meaning you couldn’t make your team absolutely amazing in all respects. We had our ways of skimming points from players we didn’t have any intention of using to beef up our starting lineup (since there were no injuries, but there was fatigue with the pitchers). The game itself feels like another RBI clone, but the creation was something special. This was 1989, and I still haven’t really heard much of whatever else Culture Brain, the developer, came up with (other than Kung-Fu Heroes, which was prominently showcased on the scoreboard), but it’s hard to overstate the value it had for us. I never took to creation as much as he did, but it made your team oh so much more special to you, when you had a hand in developing it. The game itself certainly wasn’t perfect, with the usual pitfalls that we sometimes used to win games (drop the ball intentionally to make an easy double play by tricking the runners, for example). Or how long it took to simulate a game (usually about 10-15 minutes, we’d go have some kool-aid). Generally though, it felt like a really well-made baseball game through and through. You could even choose your home stadium. One aspect of the game we never really fell into playing much was the Ultra League. This was baseball on steroids before…well, baseball on steroids. You had different crazy abilities you could use to mess with the other team such as hits that would drive you in to the backstop, hits that would seem like many balls were hit into the air at once, even if only one landed, pitches that would blaze through the strike zone, the ability to jump incredibly high in the air to catch what would have been a   home run. Interestingly, my friend ended up using the Ultra League to give him more points to work with in the season play, but he wouldn’t use any of the ultra mode abilities. I can’t even imagine what we would have thought of today’s sports games. So complicated, so detailed and amazing to look at, but there really is something to be said for watering the best elements down to an arcade-style event that always made me come back for more. Play it now!