Do law enforcement officers have agency?

Something happened on a United Airlines flight.

passengers were allowed to board the flight but were later told four people would need to give up their seats for four United employees who were needed in Louisville on Monday.

She said no passengers volunteered, so a manager came aboard and said passengers would be randomly selected and asked to leave.

A man was selected and refused to leave. Three men came to drag him out. I haven’t seen the video, but based on everyone’s reaction, it doesn’t sound like the amount of force applied exceeded the minimum necessary to remove him from the plane. Children reportedly can be heard crying in the background. The passenger was later allowed to return to the aircraft, albeit bloodied.

Understandably, people are very mad at United with many promising never to fly them again. I doubt these people will feel they are missing much; United must say a prayer every night for Comcast, for they are the one thing keeping them out of the top spot for most-hated company in America.

Still, I can’t hope but notice that the anger is directed solely at United. The three men who arrived and abused the man were law enforcement, not United employees. It would seem unlikely that United would have offered these men instructions to rough up their passenger. Nevertheless, some people, including actual Harvard lawyers, think that the passenger will end up easily winning a large lawsuit judgment against the company.

That doctor is definitely taking United to the cleaners right

I deduce from this that a lot of people basically agree with my analogy that law enforcement are like cobras. If you bring law enforcement into a situation, you don’t know what might happen, but you can’t claim complete innocence if someone is bitten. 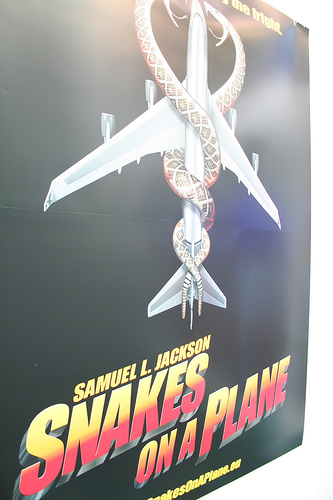 I have scoured Twitter and a couple of news sites, and I have yet to see a single take that acknowledges law enforcement agency. No one, to my knowledge, has asked “why didn’t those guys just not beat that guy up?”

Once United called law enforcement, they had to be beaten up just as surely as if they had thrown a cobra at that passenger he would be bit. No one would blame the cobra, just as no one blames the officers today. That they could react a different way doesn’t enter the mind as a possibility.

None of this is to say you should fly United or forgive them. If you do believe that United bears responsibility for what happened though, then your opinion of law enforcement is not so different from mine.