Not much to report at the 3-month mark. I know by year 3 I’m really going to be tired of all the clones, rip-offs and badly made fare, but so far it’s been interesting to see how many elements have been copied from other games. I can imagine that so many of these titles were rushed to market that it made it hard to find a true diamond in the rough. These next three games don’t quite live up to that standard, but hey, at least I wasn’t pulling my hair out. I’ll take it. 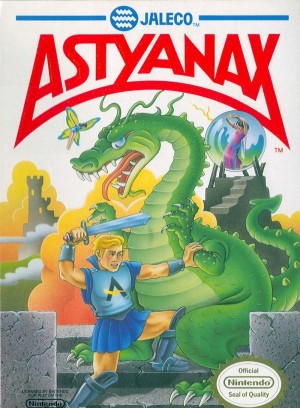 Astyanax. No, it’s not a new medication you should ask your doctor about, it’s a fantasy role-playing game about a 16-year-old. Wait, but not that kind of role-playing game. Wait, can’t you say that most games are role-playing games if I was being technical? Anyway, scratch all that: this is mostly an interesting game for one major reason. This game features cut scenes: a lot of them, in fact. When you fire it up, the first thing you get is a little background on why you’re there and what you’re doing. You are Astyanax, just a normal 16-year-old living out their teen angst fantasies when wha-bam!: a princess from another realm requires your services because plot. I turned on a few game genie codes for this when I realized I wasn’t going to make it very far at my skill level without some major practice. The overall gameplay involves hacking and slashing your way through levels, but the use of repetitive unending enemies gets old quickly. I would use a screen-clearing spell and right away another one of these persistent buggers would be right back. There is always something running around the level trying to trip you up, and it felt like a cheap way to throw in some difficulty. I didn’t mind the inclusion of mini-bosses, but I did mind the fact that you started the level over when you lost to one of them. Also, no continues that I saw. A difficult game, a little too much so for me. I still enjoyed the overall presentation, from the graphics to the sound: it feels like a well-made game in many respects. Strangely, the arcade version (released the same year, 1989) has a completely different plot than the NES one. The NES story even took a few twists I wasn’t expecting, though they were a little odd. They try to flip the usual save the princess script, to some degree of success. Overall, the game wasn’t really long enough to really feel something for the characters, which I’m sure you would get from an actual long-form RPG, but I do appreciate the effort. Usually, you have to read the manual in-depth to get any sense of a story, and this one breaks the mold in trying to engage the player in their cinematic scope. Play it! 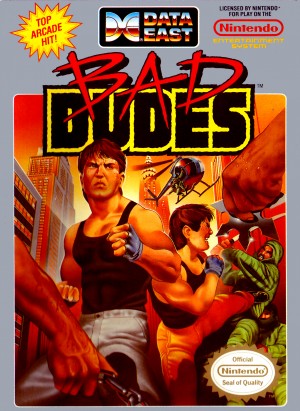 Oh, Bad Dudes. I’ve heard about you. Not a lot, but just things about the president and his love of burgers and yes I can confirm: it has both. This is a beat-em-up, in the vein of Final Fight or Double Dragon. I feel like it’s not quite as good as either, and yet it has a charm all of its own. When you defeat an end-stage boss, you thrust your fist up in the air and declare “I’m bad!”. I half expected a spin, crotch grab and a “Sha-mona!”. You are mostly shirtless, gets life from random cans of soda and you love those nunchucks: sounds like a profile on Tinder. It’s tough to review a game like this, but there were a few things that initially tripped me up about this title. It’s on the hard side, where it felt like I didn’t have a lot of defenses against the onslaught of ninjas other than impeccable timing, which I suppose is the domain of most of the games on NES. I did find myself getting a little bored as time wore on, there wasn’t a heck of lot of variety in most of the levels. There were running themes: run across to the right, kill ninjas. Stay on moving vehicle, don’t fall, kill ninjas. Drink soda often. And so on. Data East released this in 1989 and I’m not sure it really smashed any new ground. I’m sure it would be a blast in 2 player mode, but that requires friends. There wasn’t a code for that (sad trombone). Some of the end stage bosses were pretty interesting, I especially enjoyed the ninja who phased into 5 ninjas, all set to kick butt. I had always heard that the last screen was the president thanking you and then offering to go get burgers. Well, they certainly were not wrong. The president is even holding said burger right in front of the White House. ‘Murica. Leave it to the Japanese to make a game far more patriotic than I’ve seen from the USA. Try it! 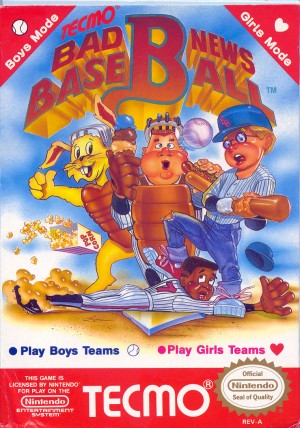 Last up, is my first baseball game since I started this back in January: Bad News Baseball. Tecmo, the creators of one of the most amazing sports games I’ve ever played, Tecmo Super Bowl, is behind this effort, and some of that shine is apparent here. All of the elements of a great baseball game are here, mostly. The problem is, it’s been done before – and many times over by 1990, when this game came out. RBI Baseball started a trend that worked its way through many baseball games on the NES, and while it was refined, it’s surely not in its finished state here. I have always had a penchant for Baseball Simulator 1.000 which will be coming up very soon. Bad News Baseball keeps many aspects of its predecessors, but sadly doesn’t add much to the experience. There is no season mode, you merely are asked to try to defeat every single team, with infinite attempts given. There is an all-star mode and even a strange “spectator” mode, where you basically watch the computer play against itself: that’s one way to help it figure out nuclear war has no clear winners, but it does not a thrilling baseball experience make. There is no character creation here, just straight-up baseball with fake teams with no mascots. I had a good time playing it, mostly because it fell right into my wheelhouse, given all the hours I’ve played all the other clones in my life. The swing animations are excellent though, as are the throws to first base and home run cut scenes. There’s a little league quality about it, which totally makes sense given the casual movie tie-in that’s not really a tie-in. In Japan, the game was called Gekit?!! Stadium, and you could tell they were just trying to appeal to mass market consumers with the name. Interesting note, if you have a second controller, you can press some buttons and activate a girls mode, where everything is mostly the same, but you have girl-looking sprites. I’m a little uncertain why that wasn’t just an option thrown right into the game, but good on them for trying to be progressive in some way shape or form. Try it!