Book Review: Discourses of Mourning in Dante, Petrarch, and Proust (2016)

]At my undergrad university, there was a joke among the philosophy students about the Philosophy of Death course: Not everyone takes the class, but everyone has to take the final.

I thought of this when reading Jennifer Rushworth’s study Discourses of Mourning in Dante, Petrarch, and Proust. Not everyone studies mourning, but it’s a task that all of us have set before us at some point in life. A full-time job, mourning has no particular length of employment and (as George W.S. Trow once said of life) the trouble is with the ongoingness of it. No one ever announces we are released from service. Even the thought of being finished with mourning feels inappropriate somehow, like an offense against the person we mourn.

Mourning has a rich literary history too, straight back to Gilgamesh’s grief over the loss of Enkidu. 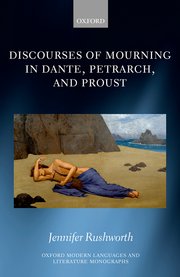 Rushworth has studied mourning in literature and specifically how different writers have understood grief in the medieval and modern eras. Her method brings together and opens a conversation of sorts between writers who were certainly influenced by one another, at least in terms of antecedents, but whose distance in time and space often prevents close comparisons from being drawn in academic studies. Freud is used to comment on Dante and Derrida to illuminate Proust. Literate in Latin, French, and Italian, Rushworth is able to open up avenues of comparison between thinkers who probably should be read together. It’s a fruitful method that perhaps is not used enough in academia.

The book is brief, but I’m not sure how long one would want a book on mourning to be exactly. In the first chapter, Dante’s Comedia is used to analyze “acedia”, that most difficult to translate or comprehend of the medieval vices. The usual translation as “sloth” misses the mark; acedia is more of a deep spiritual lassitude closely related to melancholy. It is ongoing and somehow inescapable. We are trapped by it. In Dante, those damned by acedia are forced to relive a moment of sin repeatedly, pushing them further from God.

Key to the experience in Dante is that acedia breaks down our use of language, makes it incomprehensible and unfeeling: Dante’s “Quest’inno si gorgoglian ne la strozza”- This hymn they gurgle in their throats. Those damned by acedia cannot sing the hymns that will prove their salvation. Rushworth cites Julia Kristeva who writes of the “asymbolia” of melancholy persons in ways that very much evoke Dante’s acedia- when deep in melancholy, our language is often “fragmented, broken, interrupted, and repetitive.” We hardly know what to say to convey the experience.

But, paradoxically, acedia can also be creatively fruitful. In the second chapter, Rushworth shows that Petrarch’s mourning the distant and unapproachable, and then deceased, Laura is “both a breakdown of speech and line after line of moving poetry.” The experience of mourning can be “an incitement to the creation of a new poetic language.” The reason we still find Petrarch’s poetry moving, not to mention terrible radio love songs, is because it seems to include us in a community of mourners, yet we need our own language to express our grief, since we feel it as unique.  As Rushworth puts it: “Writing about grief means inevitably to participate in a wider, more general discourse that may represent a betrayal of the uniqueness of the experience undergone, but which can offer its own form of slim comfort.”

Mourning also involves a sort of indifference; Roland Barthes calls it a “lack of investment”. Rushworth recalls Proust’s narrator who realizes he will never be a poet because nature evokes nothing in him. Petrarch envies Laura’s grave for holding her body, a morbid turning away from the world. Dante can only return to Beatrice by turning away from the world, and women, to God.

I think many of us would rather mourning be completed at some point. Rushworth makes much use of Freud, who saw the “work of mourning” as a withdrawal of the libido from a lost love object that ends in forgetting and replacement with a new love object. Freud contrasted this with melancholy, which is endless and pathological.

But the idea of a replacement love object is fairly unthinkable for most of us. With whom should we replace a lost parent, for instance? Or a beloved who has died young? Petrarch’s mourning is “faithful to the memory of Laura and a conscious refusal of any new amorous attachments.” Proust’s narrator, by contrast, paradoxically loves others “in memory of” the lost Albertine, something I think many of us can relate to in some way. I would never want to replace the distinctive memory of my former wife; nor would I want to mourn our marriage forever, as my father did.

As might be evident from this review, the book’s chain of references can be a bit off-putting at times. Nevertheless, the study is a very useful reminder of the role that literature plays in speaking to the most painful experiences of life and making sense of the harder work of being human.

I found most interesting Derrida’s “demi-deuil”, a “blending of fidelity and infidelity” that seeks to both remember and forget the lost loved one. Proust’s “intermittences of the heart”, a title considered for the Recherche, is a useful and related concept here – most of us experience mourning, after a time, as involuntary but mercifully brief flashes of memory. In a sense, mourning is something that we learn to live with. Proust’s epic of memory, selfhood, and the eternalizing aspect of writing is a wonderful place to end, as a reminder that, when we grieve, we grieve ourselves, a work that never really ends.

[Publishers are invited to send copies of their recent books for review to Rufus F. care of the masthead]