The sound of two fighter planes in combat, the camera zigs and zags between studio logos as though it were strapped to the nose of one of the planes. The cacophony continues until…silence. The sun beaming down, and then a distant scream. It grows louder as we see a man falling, seemingly from the sun, toward us.

A calm and picturesque beach in the South Pacific, 1944. This is paradise. WHAM! One of the planes crashes into the sand as its American pilot drops into frame on a parachute. He turns to see a Japanese fighter careening toward the island. Its pilot stands on a dune, parachute around his ankles. The American pulls a pistol, fires at him and misses. Both are as incredulous as we are. The two take off running into the jungle.

I won’t spoil what follows, but suffice it to say that the men aren’t alone. I love when a filmmaker can sell tone and aesthetic as efficiently and effectively as director Jordan Vogt-Roberts. Manic energy, irreverent humor, and giant friggin’ monsters – if you don’t like what you’re getting in the opening moments of “Kong: Skull Island,” it probably isn’t for you.

After a title sequence that takes us on a tour of US history from the end of WWII to the formation of Landsat, we find ourselves in the early 1970s. Bill Randa (John Goodman) and Houston Brooks (Corey Hawkins) are assembling a team to explore Skull Island, recently discovered by Landsat satellites. They hire a tracker named James Conrad (Tom Hiddleston at his most chiseled). They recruit Preston Packard (Samuel L. Jackson at his most Samuel L. Jackson), a Lieutenant Colonel dejected by the US abandoning the war in Vietnam, to head up a military escort. They’re also joined by photographer Mason Weaver, played by Brie Larson at her most…well, she’s not given much to do.

The plan is to use seismic charges to map the sub-surface of the island, but there’s a delicate timeline. The island is perpetually surrounded by powerful storm cells, so it’s only accessible for three days. Anyone who has ever seen a haunted house movie can tell you this is a bad idea.

Set to the sound of Black Sabbath’s “Paranoid,” the group immediately starts dropping bombs. And it doesn’t take long to attract the attention of the island’s sheriff. Kong, in a show-stopping sequence, dispatches the army helicopters by any and all means necessary, including throwing a palm tree though one and spiking another as though it where a volleyball.

Our characters are then scattered across the island. Bill reveals that he works for Monarch, an organization that tracks massive unidentified terrestrial organisms (giant monsters for laymen). Having lost men in the skirmish, Preston thirsts for revenge. Mason and James stumble upon an indigenous population, among them Hank Marlow (John C. Reilly) – the US pilot from the beginning of the film. The team must now reunite and make it to the extraction point before it’s too late or before they’re lunch.

Kong’s legacy is almost as big as he is – he’s been around for 84 years. So as not to be crushed by the over-sized gorilla, the filmmakers start from scratch. Sure, some of the iconography is here – a wall, a young blonde woman – but many of the familiar tropes have been jettisoned.  Instead, we get an Apocalypse Now-inspired, rock n’ roll-infused monster film. DP Larry Fong’s vibrant and lush images aren’t the only things that recall Francis Ford Coppola’s Vietnam epic – fans of “Heart of Darkness,” the novella that inspired “Apocalypse Now”, will recognize character names Conrad and Marlow.

Vogt-Roberts’ first film was the indie coming-of-age comedy, “The Kings of Summer.” “Skull Island” represents a kaiju-sized leap in budget, but the director proves that he’s not monkeying around. (Sorry.) I love the way he stretches time leading up to the helicopter attack, cutting to a series of close-ups of our characters gawking as a shadow slowly overtakes their faces. He teases out the full Kong reveal by showing the ape eclipsing the sun, just a hazy silhouette. Vogt-Roberts is also adept at visual comedy – whether its the humor he mines from a Nixon bobblehead or the cheeky cut-away from a character who’s about to become a snack to someone else biting a sandwich. 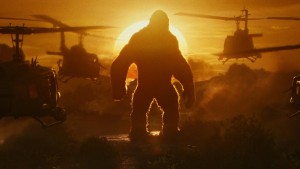 The script – by Dan Gilroy, Max Borenstein, and Derek Connolly – doesn’t fare as well. Once our ensemble gets separated, it feels as though the film is spinning its wheels. A subplot involving Toby Kebbell’s Jack Chapman, one of Preston’s men, goes nowhere and contributes nothing. The characters could have used another pass. Brie Larson is one of our best actresses. She popped up on my radar with her tremendous performance in “Short Term 12,” and she stayed there with her Oscar-winning work in “Room.” She’s given nothing to do here. Her role could have been played by anyone or removed entirely. Surprisingly, John C. Reilly’s Marlow is the most compelling human on screen. If you saw the trailer and you’re like me, you probably expected him to sink the movie.

Even some of the monsters could have been more developed. Kong is as menacing, majestic and sympathetic as you’d expect. I especially liked a scene where he washes a wound, observes his reflection in a lake and then chows down on a giant octopus. It ain’t easy being a demigod. But there are antagonistic critters called Skullcrawlers. We learn that they killed Kong’s parents, but their confrontations with Kong would pack more punch if they had greater screen presence.

Still, I’ll take some flat characters (human or otherwise) for a big budget film with this much personality. “Kong: Skull Island” represents the second entry in the Legendary/Warner Bros. foray into a Marvel-like cinematic universe – this one the MonsterVerse. The first was 2014’s “Godzilla,” a film I liked quite a bit sans the similarly flat characters. In fact, a post-credit scene in “Kong: Skull Island” teases future conflicts with Japan’s favorite wrecking ball.

One of the things I appreciate most about these two films is how they differ wildly. “Godzilla” with its more somber tone, eye on genuine spectacle and patience in dolling out the monsters. And “Kong: Skull Island” with its rich color palate and go-for-broke style. For all their faults, these are not off the blockbuster assembly line. And that’s not just the giant monster fan in me talking. This is franchise filmmaking done right.