PATN Week 11 – Arkista’s Ring and I liked it (mostly). Back To Future? Can I get my time back? 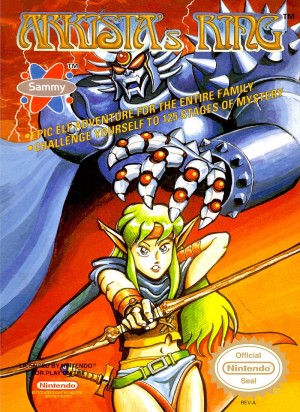 Arkista’s Ring is a little game made by American Sammy, but I think it’s made in Japan, which isn’t confusing at all, I’m sure. It came out in 1990, but it doesn’t have a whole lot to show for itself in that area: graphics are clear and functional, but not amazing. The music is pleasant, but not jaw-dropping. You play Christine, questing to defeat the evil Shogun (hmm) and hopefully restoring light back to the Elven Kingdom. It’s very reminiscent of Zelda, with the top down form and the way you shoot enemies, but it lacks in many areas that game succeeds. For one, the stages are very short and not very big in area, where LoZ (Legend of Zelda) actually had sprawling maps, which was insane at the time (1986). Another problem I had with this game was the overall difficulty was very easy. They give you so many hearts, armor and protection against the enemies you faced. I am unsure of the reasons to just add random bits of armor and helmets at the bottom of the screen to represent potential HP, when just adding more hearts would have been simpler (if more of a copy of Zelda, but might as well go all the way if you made it this far). Many of the stages involved running around looking for secrets that opened up areas to further exploration. To give you an idea of the ease of this game, I very nearly finished it. Without any cheats (I know, right?). I made it to stage 30 (!) of 31, but I was greeted with a band of ninjas that, if you don’t defeat them outright to start, when you have all your potions and stunning abilities at the ready, is basically impossible. You can’t go back a level to get more items, continuing puts you right back in the action and each of their attacks took off 2 hearts or more. It was strange seeing a game almost realizing how easy it was trying to make some sort of impossible task right before the final boss. It colored my feelings towards the game almost immediately. My initial thought was to award this a Play It! because it actually engaged me, it was fun and breezy and I had a good time. But to deny me the final section just because the first time through I ate through all of my items? I went through 8 continues in trying to defeat stage 30 after losing only 2 of them in previous levels. In short: a valiant effort with a lot of good elements that unfortunately succumbed to a few gameplay fallacies that I have a hard time looking past. Try it! 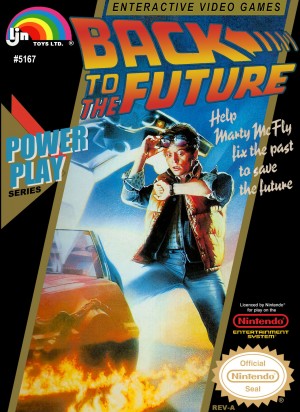 I have slight recollections of playing this next title. I was 10, I was a huge Back To The Future fan, we were at the local movie rental store (oh the memories), which also happened to have a nice supply of video games that I loved to bring home and try. I recall being very disappointed in what I got, and now that I’m playing this nearly 30 years later, I can see exactly why. This game, for lack of a better term, sucks. You start out in the streets of Hill Valley, unsure what year because that seems to be unnecessary information. Given the hula hoops and random thugs, I assume it’s 1955. There’s no intro cinematic, no fun DeLorean to drive or anything that really ties it to the storyline of the film. You’re thrown right into a Paperboy-ish run and dodge scenario. You have to collect as many of the clocks (?) as you can to keep the picture of your friend Doc and others (I can only assume it’s family, hard to say) from disappearing. Along with this, there is a persistent timer that keeps going even when you are knocked down. Birds fly around, projectiles from the hula girls fly at you, all in an attempt to stop you from getting to the first scene: Lou’s Diner. Once you get there, there is a mini-boss-mini-game where you have to throw mugs at bullies as they come towards the bar. You have to down at least 50 of them without them reaching the bar, but the perspective of the scene is really odd and makes it very difficult to hit anything. It’s boring and repetitive, but at least there’s a reprieve from the eternal insistent music. If you lose, you have to play the previous level again. No lives, no retries. Even if you “win”, the bully still throws you into the door and then it gives you congrats for winning. Yeah, that seems to make sense. This is another gem from LJN, the rainbow logo toting company that apparently makes all the movie tie-ins.  This is the worst of the lot from these guys thus far, and I’m sure there’s going to be quite a few more. Would it have killed them to try to tie it to the movie more? Even the set pieces you run across are boring and repetitive and barely connected to the overall story. I was very happy to turn this one off. Avoid it! 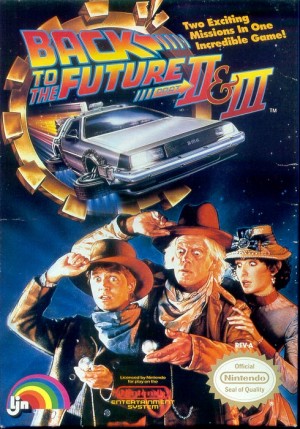 Right on the heels of a disappointing BTTF experience, I was keen to see if Back To The Future II/III had anything more going for it. They both came out the same year (must have been a big marketing year for the franchise!) or I guess you could say all 3 came out the same year. It starts off with a lot more promise: flashy title graphic, some semblance of a Power Of Love cover, good, good. A whole back story into what’s going on, what you need to do, with some artistic license: fine, I understand it’s a game so some liberty must be taken. Then you are dropped into a platformer that is immediately bewildering, confusing, repetitive and nonsensical. You jump around industrial metallic platforms and pipes trying to avoid or crush the following: birds, snails, masks, cops, frogs, snakes, little dots dropped by flying pills that follow you, bats, and dinosaurs. The controls are floaty and nearly unusable, which was wonderful given the amount of small platforms you were given to traverse. Was this 1955? 1985? 2015? Alternative 1985? Does it matter? There’s more I’m sure, my mind is attempting to block any and all content I consumed in the last hour. You can collect things, function unknown, like mini flux-capacitors or keys if you happen to somehow catch it before it falls down into nothing. I went into a pipe and was greeted with a text that read (paraphrased): Find the object in the room that belongs here. Below that was a grid of blue squares and nothing in them. Above was a word that was scrambled like “skateboard”. I don’t know, I tried every box, nothing. It was completely a mystery. You have to go up and down different passageways to find things I assume. There were counters for different objects I had or could use, but every time I used one, nothing happened: so that’s a loss. At least BTTF 1 had some purpose that was (maybe overly) simple to figure out. This is madness. At one point, my friend pointed out that one of the scrambled words said “revolver”. Yeah, that would have been quite useful to me. Avoid it at every imaginable cost!