I find it amusing that in these first 9 weeks of playing NES games, I haven’t once run into a game I’ve already played. I always thought I was more versed in the world of Nintendo back in the late 80’s, but it’s proving to be very much untrue. One of the reasons I started this sojourn was to explore the origins of game creation and development in the home era, to find adventures I never knew and in many cases so far, wish I never had known. Slowly I am realizing it is very difficult to create a good game. I always took for granted the experience of the Mario games, just thinking: “Of course! Every game must be like this, why wouldn’t it be?” There’s the subtler elements of level design, pacing, and control that never really presented themselves as essential. Most of my gaming career, I’ve sought out the best games. I read reviews, heard the word of mouth, and generally filled my collection with some of the best of the best. Sure, there are bad ones here and there, but having to sludge through some of the worst examples on the NES has really opened my eyes. It’s not for lack of trying in some cases, though I know it is for those pesky movie tie-ins, may they all burn (well, I’m sure there’s a few of note, somewhere). Games are hard to make well and this must have been especially true of the formative years. I can’t say all this insight will be any more successful in making me any less likely to throw my controller, but we can all hope for nirvana. To see my potential controller-throwing antics, go here, to my Twitch stream. I do have my past broadcasts archived there as well. 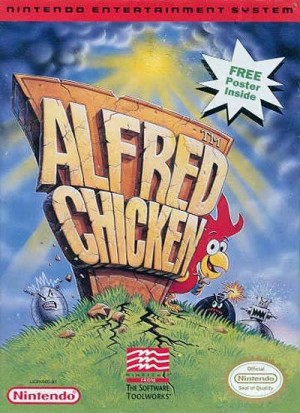 It wasn’t a parade of joy running through my mind when I booted up Alfred Chicken. Never heard of it, never heard anyone speak of it. The title screen was not doing it any favors either: bland brown background with weird brown stars. Sure there’s Alfred there too, but he looks small and uninspired. The music, while not completely without craft, was at once peppy and grating: like a polka band that has a penchant for atonal music. Pressing start put me right into the action, no background, no clue about my overall strategy. While still a little one-note in terms of background, the characters were colorful enough and there was definitely some work put into the small details: character and icon animations were smooth and subtle. The controls were tight and nuanced, which is always aces in my book. One interesting thing I noticed right away was that everything was noticeably a little smaller, which helped give space to the environment. Alfred can sort-of fly (seems just about right, given chickens), dive-bomb as his main attack, and peck his way to victory. Another interesting design choice: no score or lives left indicators on the main screen. When you press “pause”, you get all the information needed. The areas are timed still, which I find to be an annoying mechanic, especially when you can’t see the time, but it never presented a problem in my gameplay. When you die, you hatch from an egg around the same area as you were in, but this seemed a little arbitrary and random when I played, since the levels themselves were not completely linear in presentation. Instead of a “get from A to B” mentality, in this game the object is to cut the strings on all the balloons, the last one of which taking you to the stage clear section and a passage to the next level. It took me a little while to figure out what the point of everything was, but once I realized, the game was much more fun. This was actually a British game, and this is a port of an original Amiga experience that came out in 1993. After reviewing some gameplay (including one from Game Grumps, which I had no idea had played it) of the SNES version, I saw it was really quite a faithful port. The levels and experience was mostly intact, with a few changes made because of the older hardware. The plot was still something of a mystery: where was Alfred going or doing exactly? What were those crazy looking robots? Was there ever going to be a road he had to cross and if so, would his purpose be realized? Joking aside, it wasn’t immediately obvious. The original Amiga game and the manual was a bit more forthcoming: Your brothers and girlfriend are kidnapped by these so-called Meka-Chickens to be used for “evil cloning experiments” (I’m sure many conservatives could make an argument that all cloning experiments are indeed evil, but that’s for another article). Basically, the save-the-princess school of game design. I’m alright with that, and I’m alright with the game. Play it! 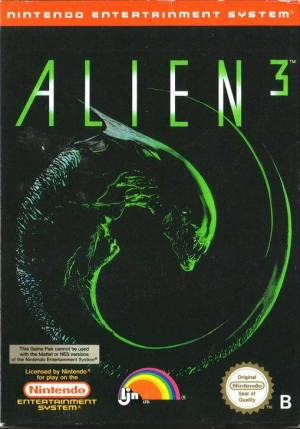 Uh oh. A movie tie-in game. What wonders must await? Oh no, and what’s this? A LJN game! You may recall I played another gem from this company in the form of another tie-in: The Nightmare on Elm Street. This particular marketing ploy brings us the first Alien game for the NES: Alien³. I sighed and fired it up, and was immediately greeted with an amazing title track tune that went on longer than any other title screen music I have ever heard on the NES. The title of the game came in like a true Alien movie should: with the letters slowly materializing one slash at a time. What’s more, there was an actual options menu, where you could choose how many lives you started with, listen to tracks of the music one at a time (the score is actually immediately a classic for me, my head was bopping almost instantly) and you could even listen to the sound effects, but one wonders exactly why. This game came out in 1992, so the usual sheen of games of this era was definitely present. The game itself was a mixed bag. The basic objective was to find all the hidden prisoners throughout the level and rescue them while avoiding the Aliens themselves, which were quite a bit more numerous than in any movie in the franchise. For some odd reason, LJN also decided to flip the jump and shoot buttons (classically these should be A jumps, B shoots), which lead to a lot of accidentally jumping over enemies instead of shooting them. Aliens also tended to jump out of nowhere on the side and knock you down, lowering your life. Ripley was constantly running a little far to the right of the frame and BAM: Aliens. Your life meter could run out which led to death, or you could also run out of time before all the prisoners were rescued. The maps were large and confusing, with many sections looking exactly the same. Even with a better memory of where to go after a few tries, I still had trouble finding all of them in time and making it out due to a lot of dead ends scattered throughout and the fact you had to crawl through to the end at a much slower speed made matters worse.You did have a choice of weapons and there were refills and health throughout, but in some cases they were completely unreachable: almost like they were taunting you with them. The game had me intrigued with many of its elements, and I found myself wanting to try again and again to get through. I didn’t make it terribly far and was sad to see that no Game Genie codes existed to assist me in seeing more of the game. While not an amazing experience by any stretch, it was still a nice surprise to see a movie-tin in that seemed to have some thought put into it. Hey, wait, wasn’t the prison planet on Alien³ supposedly gun-free? Well, what can you do, I suppose. I mean, how silly would it have been to make an Aliens game instead? Well, silly to the marketing team anyway. Try it! 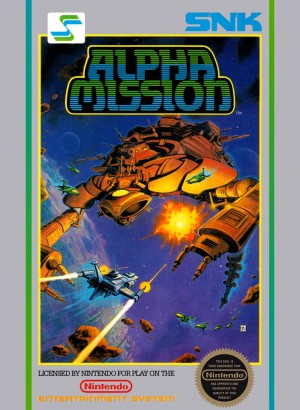 I was all set to play another sports game on NES, but sadly All-Pro Basketball seems to be firmly in the “bad header” category, so I moved on. I was greeted with Alpha Mission. This SHMUP was originally an arcade game in 1985 before being ported to the NES in 1987. It was amazing to go directly from Aliens to this game and see how much developers had done to enhance the experience on the system in such a short time. Alpha Mission was clunky and slow, the backgrounds borderline epilepsy-inducing and plagued with stuttering graphics. There were power-ups available, but some of them were actually bad (as in warped you back a few sections kind of bad, but also I couldn’t tell that’s what happened kind of bad). There wasn’t much fluidity in the movement which I think would be key for this kind of game to work. You could tell that they didn’t know exactly how to port the experience over from the arcade. NES has never struck me as a very fast system for these kind of games, which is part of the reason you hardly see this genre. I found a few Game Genie codes on this one, but the difficultly was still a bit much for me to handle, and part of that brutality was restarting you over all the way at the beginning whenever you died, even if you were facing the boss. I have read that this game was a forefather of SHMUPS and important, and I can give it that credit, but this port is very lacking. My interest in playing it waned quickly and after only 15 minutes, I decided to turn it off. A game doesn’t need amazing graphics to be good, but the lack here just further tarnished my view of this mediocre experience. There are better alternatives. Avoid it!