Does the World Baseball Classic Matter? 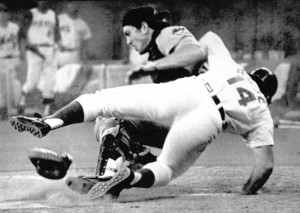 Pete Rose, in the 1970 All-Star game, came in high and hard to home plate, taking out catcher Ray Fosse. If you are a fan of Rose, you likely consider this an example of how he always played to win, and admiringly call him “Charley Hustle.” If you are not a fan of Rose, you might cite this as an example of what a terrible person he is, claiming that he ended Fosse’s career in a meaningless exhibition game.

As it happens, this collision didn’t actually end Fosse’s career, as evidenced by its extending to 1979. A better event to point to is in 1974, when he broke his neck getting between Reggie Jackson and Billy North in a clubhouse brawl. But even that doesn’t account for his playing 90 games in 1976, batting .301: pretty good for a guy whose career was ended six years earlier. Perhaps there is no need to find a single defining event to explain a catcher’s decline once he hits age 30.

This story is normally told in the context of the evergreen Pete Rose debate. That is not my topic here, but rather, the question what games matter? Does the All-Star game matter? Presumably no one would have criticized Rose for bowling over the catcher in a regular season game, much less a post-season game. Those games, we agree in our sports collective fiction, matter. But the All-Star game? It was a bigger deal back before inter-league play, when the two leagues were more distinct from one another. Then there is the more recent shtick about World Series home field advantage. Whether you think that is a good idea or a terrible idea, the whole point was to try to juice up interest in the All-Star game in this era of inter-league play.  But even back in 1970, when the All-Star game mattered more than it does today, it didn’t matter a whole lot:  bragging rights over dinner that evening. In this light, what Rose did was like sending a guy to the hospital in a beer league softball game: what an ass.

The whole ideology of what games matter and what games don’t is fascinating if you are, well, me. The question goes back to the amateur era of the 1850s.

The earliest baseball clubs were formed as a mechanism of young men in sedentary urban occupations to take their exercise together in a socially congenial setting. They would get together typically two afternoons a week during the season, divide up into two sides (just the way you would expect: appoint two captains, who take turns picking players), and play a game. The vast majority of play was within clubs.

But guys are guys. If there are two clubs in the same city, they are going to have a go at it, each picking their nine best players and may the best team win. So came the “match game.” One club would challenge the other. This was also a social invitation. The game would be played on the challenging club’s grounds, followed by their hosting a dinner, complete with speeches and songs and so forth. Newspaper accounts sometimes devoted more space to the dinner than to the game. Hospitality must, of course, be reciprocated, so there would be a second game with the roles reversed.

The thing is, guys being guys, these match games mattered. Regular club day games didn’t matter beyond the moment, because the two teams didn’t exist beyond the moment. But match games were between clubs with a permanent existence. The tell that match games mattered is what they did if each club won one game. If this were purely social, this would be a great outcome, leading to mutual good feelings. In reality, they almost immediately began playing a third game on a neutral ground, without all the social fripperies. They needed to determine who had won.

This was almost immediately followed by a special subset of match games, the “championship match.” If there are more than two clubs, they are going to figure out who is the champion of the city (or state or region or nation). The early system was modeled on boxing because that is the championship system they understood, with an established champion facing challengers. (How did they decide who was the first champion? Usually seniority had a lot to do with it, or failing that, consensus opinion.) The champion and challenger would play a best-of-three series, just like a regular match series but with bigger bragging rights on the line.

This was, not coincidentally, the period when they started charging admission, so the clubs were very interested in expanding this enthusiasm. When the professional clubs formed the first league in 1871 they devised a system to expand championship games. Instead of a simple best-of-three series between two clubs, every club in the league would play a round-robin series against every other club, with the club with the best record at the end of the season winning the championship.

Those old match games didn’t go away, but they were relegated to being mere “exhibition games.” Exhibition games certainly don’t matter, right? Well, usually not. Except when they do. Special circumstances can make them matter. In 1884 the NL and AA champions played a post-season exhibition series. They pumped it up by declaring it to be for the championship of the world. It is not clear how seriously people took this that first year, but within a couple of years they were talking about the “World’s Series” with no hint of irony, and the players were competing for a substantial payoff if they won. These were exhibition games that clearly mattered.

This brings us back to the All-Star game. Does it matter? Clearly not like the World Series matters. Neither does it matter as much as a regular season game, if your team is in a tight race. On the other hand, at one time it mattered more than it does now. There was more sense of an NL/AL rivalry in the early-to-mid 20th century than there is today. We get the eternal debate about the designated hitter, but otherwise it would be a bit odd to hear a fan trash talk about how the NL rules and the AL drools. And we are long past the point where there was any distinctive style difference between the two leagues apart from that directly attributable to the DH. Neither is there really the star attraction. If you want to see a star player, you only have to turn on your TV or fire up your computer. Having the All-Star game roll into town isn’t really an attraction. Hence, I suspect, the popularity of the home run derby. This at least is something you can’t see every day.

And now I finally turn to the World Baseball Classic, which will be starting in a couple of weeks. Does it matter? If so, how much? And will it matter more in the future? I honestly don’t know. This is very zeitgeisty, and I don’t have a firm read on it.

American professional team sports don’t have a strong sense of world competition mattering. The NHL takes a break for the Olympics, which is pretty much where the rubber hits the road. On the other hand, the NHL is (a) the weakest of the big American team sports, and (b) possibly discontinuing the Olympic break. So this isn’t very compelling. The issue doesn’t arise for the NBA, as the summer Olympics conveniently avoids the NBA season. MLB would certainly not shut down for the Olympics, and the question is moot for the NFL.

So the record of American leagues caring is not strong: certainly not like football clubs and the FIFA world cup, which clearly is what the World Baseball Classic is aiming to emulate. This is a project of MLB, so it has the institutional support. Right now we are at the point where teams will reluctantly accede to a few players having their spring training routines disrupted. Does the commitment go any deeper than this? Does the World Baseball Classic really matter, or is it a glorified photo op? We will find out when a star player gets injured in a game against the Netherlands and is out for the season.

Putting on my prophet hat, I predict that in twenty years this question will be fully resolved. The World Baseball Classic will either be a really big deal, unambiguously mattering, or it will be a distant memory, relegated to the depths of baseball trivia. Put a gun to my head and make me choose which and I would go with “depths of trivia,” but I won’t be astonished if it goes large. What won’t happen is its staying in sorta-kinda matters limbo.