PATN Week 8 – The Race to the Fortress of Airwolf by Al “Turbo” Unser, Jr

This week, I started my twitch stream on the channel with the same name as my article, Play All The Nintendo! I haven’t figured out exactly when I’ll be streaming games, but likely it will be in the evenings during the week. The endeavor has been fraught with technical issues, of course, but that comes to be expected. I got a new webcam, a friend of mine lovingly supplied art and know-how to get me started, and I found a good way to split the video signal into a capture device and into my TV, so that the retro experience for me isn’t marred in any way. There was an interesting mix of games this week, from space shooters to racing games, but of course there had to be at least one clunker, and that was in the form of, you guessed it, a tv show tie-in game. Let’s start with the best of the 3: 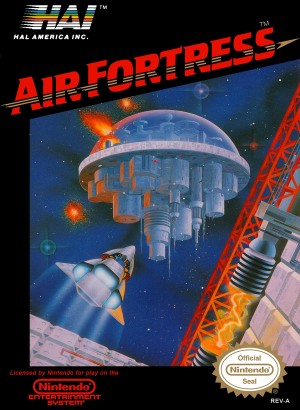 The first game I was able to load up (bad file headers continue to be an issue) was Air Fortress, released in 1989 in America, but in 1987, back in Japan.  This game takes the classic SHMUP genre and tweaks it a bit by adding platforming sections. The game felt a little too easy, which is a far cry from games I’ve played recently like Abadox, which was unrelenting in its punishment of the player. But as the game progressed, it ramped up quite subtly and with care, and it was obvious to me that some attention was paid to this experience. You are Hal, (much like Hudson from Hudson Soft) which is a ommage to Hal Laboratory, the developer. First up, you are treated to a long back story, (which has been unusual up this point in my playthroughs) and while the overall plot isn’t much to shake a stick at, it’s still admirable they gave it a shot at all. The idea is that you have to find all the Air Fortresses, land on them, and destroy them from the inside and then get out before everything explodes. This is where it gets interesting: this section to each of the fortresses’ that actually gives the game a surprising amount of tension and depth. The music becomes Metroid quiet, and you are tasked with finding your ship so you can fly out, but that can be a bit of a struggle to find since you have to backtrack. Not only this, but the screen begins to shake, lights begin to dim and there’s an oddly cinematic feel to what’s happening that I haven’t really seen in any NES game so far. If you take too long to find your ship, the shaking and sound increases in fervor until the screen goes brilliant white: game over. I found my heart start to race and a smile creep into my lips as the tensions rose. A brilliant moment of panic, as there are no enemies and nothing else that could kill you but that ticking time bomb with no countdown clock. I put the game away, thinking it was alright, maybe not great. The next time I started it back up, a strange thing started to happen. I started really getting into it. Started to feel a bond with my lonely orange astronaut as he sought to destroy every Air Fortress himself. The music was a touch shy of excellent, the graphics were mostly perfunctory: not much flair or excitement in their presentation. Even your main character looked like he rode a tiny orange space shuttle that he was nearly bigger than. I’m sure it was supposed to be some sort of space moped, but it still looked a little strange. Hal traverses the Fortress sporting his very much MMU-inspired (Manned Maneuvering Units, like they use for space walks) pack, which allowed him to float around instead of jumping. The game shifts from “don’t touch anything” and “one shot will kill you” to “you can take multiple hits” and “touching something bad only lowers your energy”. The game has an atmosphere that charmed me. I found myself wanting to play it again when I wasn’t home: a feeling I haven’t experienced with many of the other titles here. A good game all around (and in my opinion, pretty ahead of its time), I wish that it had gained more popularity and perhaps a few sequels, but I’ll take what I can get. Also: in promotion for this game in the US, they actually made a t-shirt and now I want it more than anything. I don’t even know what they look like and yet: Must have. Play it! 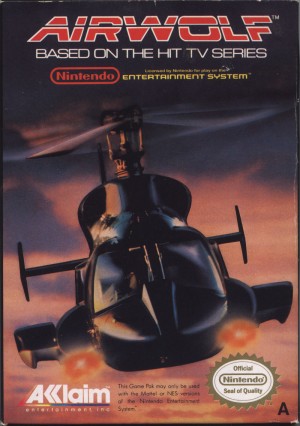 Second up was one of those sigh-inducing titles: Airwolf, Yes, here is the tv-show tie-in port of an older game. It was released in 1989, many years after the original arcade hit in 1984. It feels a lot like Top Gun, or at least what I remember Top Gun feeling like (it will be a few years before my article brings me to the “T” section to compare): which was a terrible game. You start off, as so many of these military-type carts do: being given a MISSION BRIEFING, where  some generic, mustached General spouts off a briefing in the form of “hey, there are prisoners” “hey you should get them” “hey look a map with x’s” “hey that’s all the intel we got, dude, best of luck, don’t die”, Then you are thrust into what basically runs as an infinite dogfight between objectives. I spent the first couple of lives killing enemies left and right and then mysteriously running out of fuel and realizing I wasn’t moving anywhere on the map. Turns out, my speed was at “0”, which basically meant I was idling and somehow dogfighting F-18’s all in the same moment. Once I figured out that start and select gave me control on my speed, I was then able to move across the map to my target. The forever dogfight still raged on, which I quickly realized was just a lazy obstacle to my ability to get across to the prisoners and air field (which I’m still not entirely sure was mine or theirs or what). Rescuing a prisoner basically turned the game into Choplifter for a moment, with far less control. Every once in a while, I was treated to a special picture of the lady I rescued, all busting out of her top and saying something pithy like “good thing you came, it was getting a little hot in the kitchen”. I’m paraphrasing but you get the gist: fan service for 80s gamers, I suppose. The sound in this is atrocious. They decided to try to emulate the chopper with a noise that really starts to grate on your ears. As the game progressed, nothing much else changed. You went around blowing up planes or towers or what have you and then picking up prisoners. I couldn’t for the life of me figure out how to finish a mission. I was just flying around trying to survive the onslaught of enemies but couldn’t work out where I needed to go. Since this game wasn’t blessed with an actual pause button, I had to keep flying as I looked up a walk through. A moment later, bam, I was done with mission but missed what in the heck I even did. Turns out, you have to fly to the edge of the map, and then magically you are finished. Yeah, know what? I’m finished too. No thanks. Avoid it! 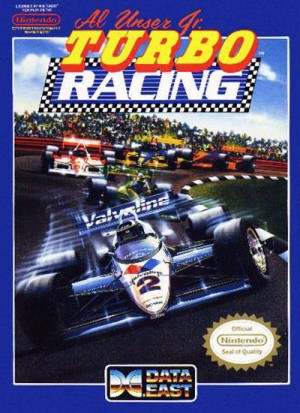 Finally, I set my sights on the next game: Al Unser Jr’s Turbo Racing, a title released by Data East in 1988. At first, I felt like it was a Pole Position clone, through and through. But, as I played through, it became clear it was a vastly deeper experience. You can shift gears in this game, you have pit stops and points you can distribute to different features of your car. You can customize the colors, you can name your driver. If I had been really into F-1 racing as a kid, I could have seen losing my mind at all the amazing in-depth options afforded here. There are time trials and full on races; multi-laps and multiple tracked cars (at least it comes across that way) and up to 4-player action. Data East took what was basically a pole position clone and expanded it past what I would normally expect for a game released in ’88. That being said, for me the basic racing was still a better experience on Rad Racer, but perhaps it was all the time I spent on that game, and how I was actually used to the mechanics. The graphics were serviceable, though not jaw-dropping. I enjoyed having a choice of  different background tracks that could play during a race and the controls were pretty tight, though I could have personally done without shifting gears: I am  never one for complexity and since there was no sound for acceleration, it didn’t have the cool factor of hearing the engine roar as you shifted. This game has shown up on many a list for being one of the forefathers of the racing game genre, and I think it mostly lives up to its reputation, if this kinda game is your thing, it’s worth a pick up. Try it!