“Does the future have a future?” J.G. Ballard once asked, referring to the chrome-plated techno-Utopian futurism that once dominated sci-fi pulp bookshelves. Optimistic visions of the world ahead of us have come to seem outdated and quaint today, like Disneyland rides or the Boy Scout oath. 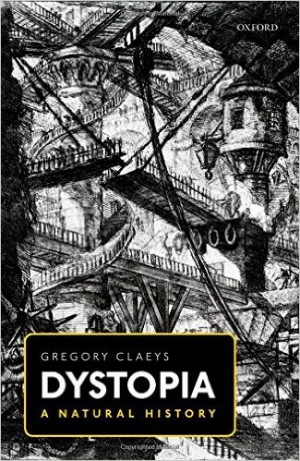 Yet no-future definitely has a future. It’s a seller’s market for dystopian visions of a world gone bad, criminal, corrupt, and unfree. I was struck during the months I spent driving through the United States last year at just how pessimistic every person I encountered seemed to be. To an outsider, America still appears a land of plenty populated with good people; to Americans, it seems a deeply corrupt, lawless land of perpetual terror and tyranny. The American political left and the right have essentially come to offer dueling dystopias: on one side, Obama’s gulags and Sharia law, both of which my mother believed in fervently for eight years; on the other, Donald Trump’s pending white supremacist dictatorship that my more “rational” left-wing friends fear just as fervently. In retrospect, Trump’s brilliance as a politician (it hurts to write that) was in depicting the hellscape that enough voters already saw looming right over the horizon. Hillary Clinton, by contrast, sounded like a Pollyannaish schoolmarm when she said “America is already great.” It’s not a message that sells anymore.

Yet, anxiety about the future is nothing new. In fact, Gregory Claeys writes: “A history of collective anxiety is a subset of mankind’s emotional history.” Anxiety has most frequently been expressed collectively about the outsider or collective other to one’s in-group. If Utopias tend to be characterized by their idealized vision of sociability- people submerged almost fully and happily in a collectivity, which happens to also express their individuality- then, Claeys argues, political Dystopias are closed groups with a hyper-paranoid vision of those outside the group as a potential threat to be controlled, walled off, removed and finally eradicated. It seems that, for as long as we’ve been living with other people in mass societies, we’ve been thinking up ways that hell might be other people.

And so, taking a pointer from Orwell himself, Claeys treats Dystopia as a matter of both historical record and speculative fiction, an evocative approach that takes him in some unique directions. It is customary to tout new scholarship as “path-breaking”, but Claey’s approach is genuinely striking. For the most part, it works and it illuminates a good deal. At the least, this book deserves to provoke much discussion in academia.

The book is divided into three parts. The first deals with group psychology and explores early notions of monstrosity and “intensely evil spaces and the relation of their inhabitants to human society.” In the early modern mind, evil spirits still haunted the earth and needed to be ritually walled off and kept away. Some such ghouls are strange to us now, such as the lamia and werewolves, others… are less so; Claeys notes a “link between monstrosity and anti-Semitism was already evident by the late Middle Ages.” Charges of deviant sexual activity, cannibalism, and malicious damage were habitually made against witches, Jews, heretics, and other “monstrous” figures, and often along what Claeys calls “sociogermophobic” lines: outsider groups were seen as a biological infection to be quarantined and vaccinated against.

The peak of this very ugly history came in the fourteenth through the seventeenth centuries, when the ever-present imminence of the Devil was “used to justify an immensely oppressive system of persecution which threatened all dissenters from the one true faith.” This was, of course, the Inquisition. Sadly, it would not be the last.

With the arrival of the Age of Enlightenment “while credulity is dented, monstrosity does not disappear.” Certain habits of mind returned with a totalitarian vengeance. The second part of the book is almost unbearable reading and I found myself depressed for a few days afterward. Mind you, Claeys is an eloquent and lively writer, but here he marches us through the soul-blackening works and days of the Jacobins, Nazis, Stalinists, Khmer Rouge, Maoists, and other political despots. We hear of the Khmer injunction against wearing colors, a supposedly bourgeois fashion choice, the mocking signs in the Nazi extermination camps offering freedom for those who toiled there, and the memorable words of Soviet Commissar of Justice, Nikolai Krylenko (shot in 1938, a nice parenthetical note): “We must execute not only the guilty. Execution of the innocent will impress the masses even more.”

Similar thought patterns emerge in these more secular contexts. Again an ideal world is supposedly just over the horizon to justify the miserable present. Again, the enemy within is described in inhuman and monstrous terms. Once again (and again and again), “Metaphors of biology and disease became increasingly common in describing categories of enemy.” Claeys makes two interesting intellectual choices here: first, he describes this mindset as a “secular millenarianism”, and secondly, he characterizes Dystopias in terms of group psychology. They are defined by their fanatical devotion to an idea of group purity and transformative social change, often through mass sacrifice. Men serving ideas, instead of ideas serving men. As Max Eastman is quoted: “Lenin and all his followers clung to the consecrated idea of the Party with ecclesiastical wolf-pack fervor.”

Nevertheless, Claeys (who dealt with Utopianism in Searching for Utopia: the history of an idea) resists a reductive tendency to see Dystopias as failed Utopias, arguing that these states had elements of Utopias, while Utopianism is not necessarily given to dictatorship. He sites numerous Utopian communities that took a piecemeal approach to social improvement without engaging in hysteria or repression. Let’s note that the Saint-Simonians gave us the Suez Canal project rather than the secret police.

In the third and final section of the book, Claeys offers a sweeping survey of dystopian literature from the late 1700s to the present, with particular chapters devoted to the two dystopian novels that are most likely to first come to mind: Brave New World and 1984.

Claeys is certainly thorough, dealing with over 200 texts. At points, though, I found the survey a bit too sweeping. Some books are reduced to a one or two sentence summary. Who would not want to know, for instance, more about Mikhail Bulgakov’s The Fatal Eggs (1925) in which the “accidental adjustment of a microscope” creates a “ray of life” that “greatly accelerates breeding”. When Russia’s chickens die off, the ray is applied to German eggs that, alas, turn out to be snake eggs and an army of serpents threatens the nation! On the other hand, Samuel Crocker’s That Island: A Political Romance (1892) in which “bankers exploit the working classes ‘to a degree almost shameful and humiliating’ before reforms occur”… sounds a bit too fanciful to believe.

To be fair, Claeys’s book is already lengthy at 501 pages and certainly erudite. And some general patterns do emerge. The early dystopian novels were satirical in nature- projections of modern trends to their worst outcomes. The revolutions of the nineteenth century then promised utopias that were quickly critiqued through fictional dystopias. The twentieth century brought fears about the machine age and diminishing humanity in mass society. The classic example is Karel Capek’s play R.U.R. (1920), in which people are replaced by golem-like robots, the play giving us the word “robot” from the Czech “robota” for forced labor.

The rise of totalitarianism inspires a flood of dystopian novels, including the two that most of us read in high school: Brave New World and 1984. It’s hard to say anything new about these books, but putting them in this context brings out quite a bit. Claeys makes a good case that Huxley’s novel endures because it depicts a “hedonistic dystopia” that is close enough to a utopia that plenty of us would be happy to live there. He also does a good job of placing Orwell’s classic, a “book draped in the blackest black” (a nice turn of phrase), within the context of Orwell’s full body of work as well as his evolving political thought. Orwell, a democratic socialist, rejects both Stalin and Welles, based on a slightly romantic vision of humanity that is nevertheless worth holding onto.

Totalitarian states are no longer as prevalent in recent dystopian fiction. Instead, we fear technological domination, neoliberal cruelty, environmental collapse, corporate domination, religious fundamentalism, terrorist violence, and nuclear war. There are some fantastic current examples; I look forward to reading P.D. James’s The Children of Men. It’s a bit sobering, however, when Claeys notes scientist Martin Rees’s argument that this is the “final century” for humans.

Or, maybe for humans as we know them. After all, Dystopias are societies in which humanity is submerged, obliterated, or lost, and writing of them is a way of reflecting on what we think it is to be human and to live together as humans. When we have politicians like John Kerry musing about a future in which working people will be replaced by artificial intelligence, the question of what constitutes a good life, and more importantly how we will prevent very bad lives being imposed upon us, remains highly vital.

[Publishers: To submit books for review on Ordinary Times, please contact Rufus through the site address.]