More “Adventures of” games awaited me this week, as it’s a common title opener for many on NES. The ground has been thawing quite nicely in Portland, and while I’m still procrastinating, I’m trying to be better about getting on the reviews early, just in case disaster strikes and I can’t write for whatever reason. I want to make sure I have some reviews in the bag. Another thing in the works is a stream of my actual gameplay: where you can see me fail and fail again, perhaps even curse and eventually break down and use a Game Genie code to see more of the game, as is, so far,  tradition. Eagle-eyed readers may notice that this first game is alphabetically before my last week’s playthrough of the Lolo series. I simply didn’t want to play only 2 of the Lolo games when there were 3 altogether, so I put it off. 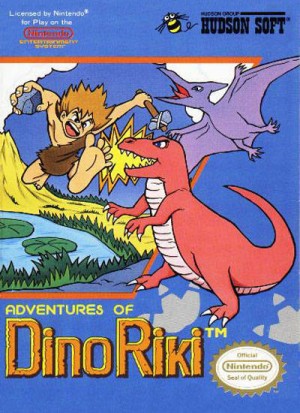 My adventures this week start with a game from Hudson Soft (of Adventure Island fame, as well as many others), that popped right up to a title screen for The Adventures Of Dino Riki with the words “HI SCORE” listed right on top; below that was the copyright date of 1989. This already made me scratch my head. A high score is something I tend to associate with the early to mid 80s arcade games, and although the first NES games seemed most interested in porting that experience home, over the next few years, the arcade notion started to fall away, as games matured and became deeper and took (in some cases) hours to beat. After doing a little bit of research, I found this game was actually released in Japan back in 1987, a little closer to the arcade era. The next thing I noticed it was that it was basically a shoot-em up, but instead of flying around, your character is a caveman that could easily have been taken from any South Park episode. So you run, very slowly I might add, over land, shooting fireballs, axes, boomerangs and more as enemies come down the screen at you firing projectiles very slowly as you do your best to dodge. There were powerups around, but the speed shoes were almost unwelcome given the amount of instant-death puddles and disappearing lily pads that I encountered. My jump changed with those power ups and that along with the constant scrolling made the platforming a very odd inclusion. The music fared a bit better, with the title screen having a lovely jaunt upon first load, and even the level music was fun, though a bit too smooth jazz for the likes of the locale. You eventually are able to find more interesting power ups, such as going MEGA RIKI, which just means you get way bigger and faster and can shoot clones of yourself at enemies(?). Ah, old games…such interesting concepts you weave. The enemies seem to have two speeds: slow and persistent or a giant wave of circling death. I did, as foreshadowed above, throw on the game genie to get past the first world. There are checkpoints thankfully, but the controls did feel outdated and jerky and the character was way too slow without a power up and way too fast with the shoes. I applaud the game for having varied stages and music, which felt a little ahead of the curve. I think this game barely misses the mark for me, it’s pleasant but when the controls are the main source of frustration there’s something a bit wrong. Try it! 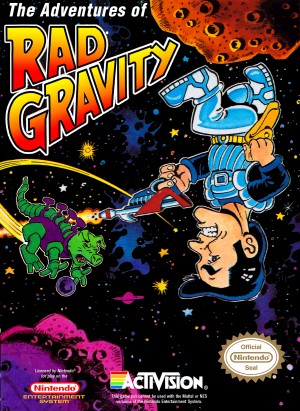 The Adventures Of Rad Gravity is an American title, but it’s nice to see some original content after so many ports and movie tie-ins. The game has a lot of the sheen one would expect from something that came out in 1990. The title screen is impressive graphically with a splashy title screen with 3-D lettering and a floating Rad in a space suit. There is some sense of a story here and actually some freedom as well, as you can travel to different planets to try to find new weapons and additional life bars. The character sprites are rather impressive, at least at first with Rad coming off as a pop-art Bruce Campbell. Controls are merely ok, the weapons are a little lackluster and the hit boxes are slightly inconsistent. As you go further, the levels get a lot more involved and interesting. The game is definitely difficult but being able to add more life bars to your total helps considerably in your frustration level. One very odd element is the musical score. It’s wildly dissonant at the title screen. I even went to YouTube to make sure something wasn’t wrong with the ROM. Nope. Completely bizarre, something like a Primus-influenced metal band. I was initially going to pass on the game after the first level, but something odd happened. Soon, I was strangely into it. The levels are varied and surprising (such as the upside down world). You can tell a lot of thought and love was poured into this, but it runs like a rough draft of what might have been an amazing game. I’ve been of the mindset that American-made NES games were of a lesser quality but I’m starting to wonder if there’s a hidden gem among these 700+ titles. I can’t say for sure this one is a quality game like some of the best Japanese titles available, but it’s a far cry from Addams Family. Try it! 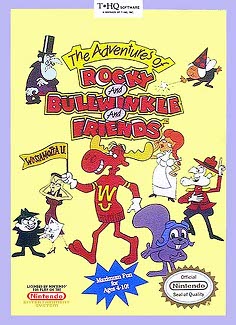 What. I can’t… What even is this festering piece of crap? Oh it’s The Adventures of Rocky and Bullwinkle and Friends. A show tie-in, of course. Let’s see: title screens look decent enough. Oh! THQ, that’s a good sign, right? I have to make a confession. I tried to play more than the first few levels, but it’s too much. Too awful, too little care, too little motion in Bullwinkle’s upper half as he walks. You spend the first level trying to awkwardly hurl bombs at Boris who never dies (so, at least it’s canon). You have to bend down and pick up items, which for a game released in 1992, seems really backwards. But, if I’m being honest, I could say I’ve never seen a game where you have to press down on the D-Pad and a button to reach down and grab something. In fact, I first thought it was another attack (ram his antlers into enemies!), but sadly, it was just a weird addition to a game that looked like someone worked on it for all of 5 seconds. Backgrounds were boring and repetitive, the characters kinda-sorta looked like the cartoon (why was Rocky all white?), but the controls were so god-awful, I received positively no feeling of enjoyment from this experience. How about the music? It sounded like I was drunk and stumbling…and I do mean exactly like that. There’s an oom-pah quality which also was repeated over and over but not before it trails off awkwardly before getting right back into it. The second stage even had different music, a little better even. But I got stuck being pulled backward by these cloud things as the music went out of control with some pitch shifting madness. It was borderline insanity-inducing. I watched a 6-minute speed run(!) of the ENTIRE GAME, that may tell you something. So, if you haven’t figured this out already, please, for everyone’s sake, burn or smash every copy you find of this game. THQ should be ashamed. I can easily say it’s the worst game I’ve played so far and I know I haven’t even scratched the surface of the bad that awaits me. Smash/Burn/Destroy. For the sake of humanity.