I’ve been running into a few issues with the ROMs I have for the last few games, so in lieu of this, I’m making a list of the ones that come up “bad header”, find new versions and see how those fare. But in the hopes of moving on, I decided to cover another trilogy, this one from HAL Laboratory. It’s here I should mention that last week I erroneously credited Hudson Soft with creating Kirby, when it was in fact these guys. They also had were involved in Super Smash Bros, so already they have two shining examples of quality. Let’s see how they measure up: 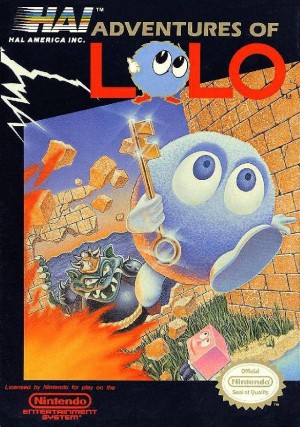 First off is The Adventures of Lolo, which was released in 1989 and while it booted up fine, I wasn’t sure what exactly was in store for me. It starts with a classic but cute rendition of the kidnapped princess trope. I love the way it encapsulates this idea in one easy animation so you know the stakes right away. From the first screen, I was fairly sure this must be a Zelda clone: top down view, bushes here and there, hearts strewn about…I quickly realized none of the enemies were moving and started to wonder if something buggy was happening. What’s more, every time I pressed “select”, my character Lolo would just die and it would start again. It took some figuring out, but I realized this wasn’t an adventure game in the standard sense. It was a puzzle game. The object? Obtain all the hearts to open the chest, avoid enemies by strategically placing items, dodging and work to get the heck out of dodge. Easy? At first, yes, but this clever game got more diabolical as time passed. I’m not usually a fan of puzzle games, but this one hooked me quickly. I had to pull myself away from it just to type this, but I’m staring at the screen every few seconds to try to figure out the next challenge. Thankfully, there is a thorough password system (of only 4 characters! Thank God) for each of the 50 levels and even if you use all your lives, it starts you back exactly where you were. It’s not all amazement and wonder though, the music so far has been the exact same tune looped and while it is catchy, even good things must come to an end, or should. Another hassle is only being able to push objects instead of pulling them, which leads very quickly and often to making mistakes you can’t recover from, which is where the suicide “select” button comes into play. The puzzles can be a bit involved for having such a precise system, which lead to a lot of cussing and muttering under my breath. It will be my hope that the next versions of these games will iron out a few of those kinks, but there is no denying the fun. I daresay I have been more invested in this game than almost any of the ones I’ve played so far. The look is clear and colorful, nothing stands out as fantastic (though Lolo’s walk cycle is fairly adorable). It struck me immediately as something that could easily become a mobile game: hell, it likely has many clones, since it was a fairly popular title at the time.  Play it! 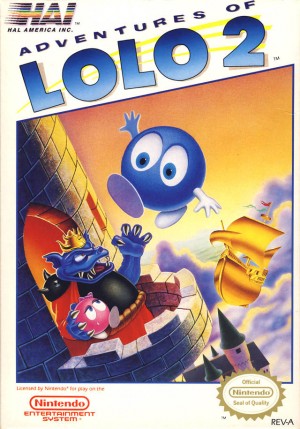 Remember how last week, the sequel to a game felt much like a redux of the original with some improvements? Well, this game actually is even more of a clone of its predecessor than I was expecting. It feels like almost 99% the same, save for the level music, which still does not change. At all. Ever. On any stage. The Adventures of Lolo 2, which came out only a year after the first game, is simply more challenging levels to puzzle you. The controls and limitations are exactly the same, but I did find the difficulty ramped up overall compared with the first game. The levels did seem more uneven, but still it was a very addicting puzzler, just hard enough to make you want to throw the controller when you make one of those irreversible mistakes. What’s interesting to me about this game, is that it was the first of the series released in Japan. For some reason, only the US and Europe were privy to the first title. However, this isn’t the first game featuring Lolo either, as the blue orb appeared in “Eggerland”, which was a title released on the MSX computer (one of the main gaming computers before the Famicom was released in 1983). I can imagine once you have all the elements prepared for a game like this, you can just crank out the puzzles and hope people will stay interested…and I really think it works. It’s hard for me to fault them for playing it safe, but I think with some added concepts, they could really brought everything to another level. Play it! But know it’s just more of the same. 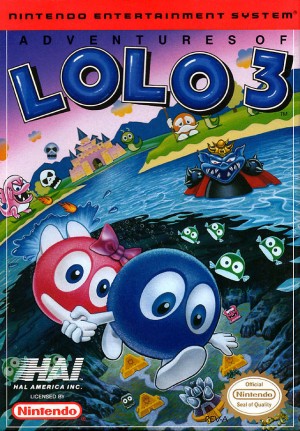 The Adventures of Lolo 3 has all the bells and whistles one might expect from an EOF title for the NES. The characters and levels are still exact copies of the 2nd game (which was already darn close to the 1st). The soundtrack has more interest and samples are used to create bongos and drums which add a little flair, even if the song, again, is continually repeated ad nauseum throughout the game. It’s strange that there wasn’t more attention paid to the music, I think it really could have elevated the overall gameplay and tension. There are a few welcome additions however: you can take on levels as either Princess Lala or Lolo and you actually can skip around (some areas are locked until a certain amount of levels are beaten first) the world and there’s even a lovely overworld map to help get you around. Gone is the unnecessary lives system, which didn’t really add any suspense in finishing a level, since you could always continue right where you left off. This time, pressing “select” actually makes a little chime sound and it just starts you over, no lives lost, no fuss. Added to the mix this time are actual boss fights, which come off a little generic, but I appreciate the spirit in trying to innovate. These games have always had a bit more action, such as dodging creatures, riding eggs and shooting at enemies to turn them into a bubble (no idea what causes that, but ok). This change feels still in keeping with the overall feel of the game. It’s not just a puzzler; it’s just mostly a puzzler. These games take a level of thought and planning that I’m not used to dealing with on a regular basis, and while welcome, it also meant I couldn’t get as far into the game without a walkthrough, which I wasn’t keen to use. There’s a very good chance I will be visiting these games again and do my best to get through all the levels. I can only imagine the puzzles get insane with complexity by the end. This version feels like the most polished, so I will call it the best, but I can’t say for certain that the puzzles are of any better or worse quality, but they certainly tested my abilities and had me grinning the entire time. Play it now!