Play All of The Nintendo! – Week 2

It’s been a snowy/rainy/windy mess in Portland, which means it’s a good time to play some NES. During this week, I got a bug in me to write some tunes through a program called Famitracker, which allows you to write a song that could be played through an actual NES (again, through my trusty PowerPak), which always makes me a little giddy. I had this crazy idea that I could recreate the training montage song from Rocky IV with just the 5 synth channels that a NES affords me. If you are interested in seeing the fruit of that effort, follow this link.

Now, on to the games:

I’ll get this out of the way: 720° is not a good game. It’s a crappy 1989 port of what I assume is a much more amazing arcade cabinet (with speakers that look like a boombox! Radical!) made in 1986. It starts with some promise: there’s an open world feeling to it. There’s even a box with little icons and counters, promising 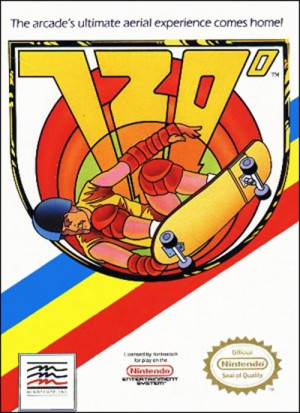 depth and interest. After skating around awkwardly, falling into the fountain multiple times, I see this cloud of what I can only assume is bees (oh god the bees) and as they touched me, a skull appeared, and my game was over. What? Yup, turns out there’s some sort of idiotic timer that forces you to try to get to the next event as soon as possible or death. There’s even a “Skate Or Die!” warning that apparently famously inspired the creation of that game, which I will likely play in a few years (it’s in the “S” section, which is many many games away). These events are placed at the 4 corners of a map and you hardly have time to get from point A to point B without the bees coming to ruin the party. As for the events: Jump, Downhill, Slalom and Ramp? I sucked at all of them. Somehow, I manage to rack up medals on some of them, though not with Ramp: I couldn’t even get a trick off, the timing was completely lost to me. This game doesn’t believe in giving you time to do hardly anything and what’s worse is after you do it once, it’s closed till the next level. Win or lose, that’s it. The shops work the same way, once you get your little upgrade (I assume so, because I saw basically no difference in anything the entire time I played, but money exchanged hands) of a better jump or kneepads or board they close down, cause capitalism I suppose. Everything in the game is severely regimented. I just wanted to try the ramp again, maybe try to work out how exactly that works but no, it makes me wait to go through all of the events and then loop back and try it again for all of 30 seconds. And the game let me level up even if I failed some of the events, so I assume it got harder at that point but the standards for medaling were also ambiguous. I have a feeling that ports of arcade classics and games based on movies will be the death of me. Let’s hope they fare better than this one. Avoid it!

8-Eyes (1988) at once reminded me of Castlevania, but I can’t say for sure how similar they are due to the fact that I haven’t really played a heck of a lot of Castlevania myself. However, it doesn’t strike me as necessarily a clone due to one interesting element: you are a falconer. This mea 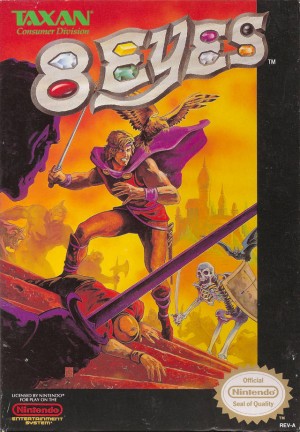 ns you can somewhat control a falcon that will attack when you wish and even has a health bar of its own. You are Orin and your falcon, Cutrus, must go through the 8 stages (such known places as “India” and “Germany”) in a post-apocalyptic (which for me generally means: doesn’t have to look like anything known, because wasteland) world that is filled with all sorts of one-eyed mutants in diapers and small jawa-like creatures in hoods and all sorts of holy SHIT this game is HARD type situations. A quick look on YouTube revealed plenty of “no death” playthroughs and I wish I could say that my prowess is evenly matched, but nay. Oh so nay. This game is brutal: from the endless parade of annoying birds, enemies that can only be killed by your falcon, and feeling like there’s almost no way to get around getting hurt and hurt again. Hell, they even start you at half-life, just to get the panic ball rolling quickly. I can say I honestly appreciated elements of the game: it had a clear, defined look with lots of colors, the controls felt polished too, and the music was varied and classical-leaning to keep the overall presentation top-notch. I should have known going in when the game allowed me to choose any world to start: that usually meant they were all very difficult. Mega Man anyone? A few of them were even mazes, as if just to be rude. I retrieved not 1 of the 8 eyes before I shut this one down, but that doesn’t mean it can’t be enjoyed. There was something so satisfying about releasing your falcon to raise some hell…I might even pick this one up again, even if it means I’ll end up throwing my controller. Play it!

So, it seems in 1990, a good 6 years after the first movie came out, the fine folks at Rare (yes, that Rare) decided to create a movie tie-in for A Nightmare On Elm Street. I have never seen a full ANOES movie, but I’ve never dealt with horror movies well, the concepts and scares tend to follow me down dark hallways long after the credits roll. I am, perhaps strangely, really into survival horror. I didn’t expect this to be in that vein, and was not disappointed. The music immediately jumped out to me as being better than your average and after looking it up I was 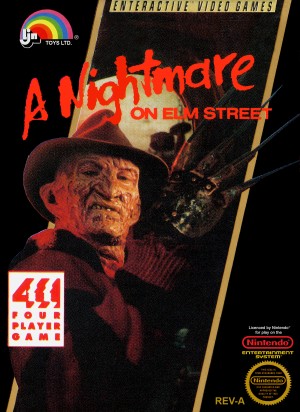 happy to see it was by David Wise, who also did the music for the famed Donkey Kong Country series and he’s done quite a few NES titles other than this one which I’m sure I will be happy to hear when I run across them. Sadly, that’s nearly all I can say for this game. Your main character is a red jumpsuit wearing joe, you walk down Elm Street punching snakes and bats and giant spiders until randomly you get thrown into a dream world where these enemies have been replaced with skeleton birds and skeletons and freddy head spiders and…yeah. They don’t do anything different as far as I could tell. Did I mention that this could be 4 player game? Oh yes. I can attest to the polish this game has, though. There is a late NES feel to the undertaking, from an impressive title graphic to the foreboding houses on the side of the street but after walking all the way down the street and unsucessfully trying to go into some of the buildings, I reached an impasse and couldn’t go any further, so I went back thinking “Oh my God, really? This is it?” and that’s when the music shifted to Freddy’s lullabye, followed soon by a giant black and red splash screen with the text “Freddy’s™ Coming!”: which is just terrifying from any number of perspectives, nevermind the trademark. So without me doing much of anything, apparently now I was in front of a very blue brick wall, fighting the big daddy supervillain of the whole shebang, who basically jumped and slashed in a oddly routine way and I struck my final blow; instead of dying, Freddy casually left off the side of the screen and the game threw me back in to the dream world. Um, ok. After trying a few more times to get into anything on the side of the street, it finally let me in, and I got a side-scrolling platformer where I had to punch yet more things and collect bones which apparently were worth 2000 points each, but I don’t even recall anything before having points pop up, but que sera.  I finally reached the end of this house level, where a giant arrow pointed down to this little trap door and no matter what I did I could not get the game to go any further. It looks like the deeper secrets of this game are locked behind a not-so-working ROM. I can live with that, as long as I didn’t fall asleep during the game and this is all a dream and oh no…I may not be back next week. I told you these games would be the death of me. Avoid it!