Some waves were made a few weeks ago when the Trumps let it be known that Melania may or may not be joining Donald in the White House, and also that Ivanka will be setting up office in the First Lady’s office quarters. Slate wrote a piece explaining that having non-spouses act as First Lady isn’t really new. A lot of the response has looked something like this:

No. Don’t normalize this. It’s not normal. They were widowers, a bachelor, or the wife had suffered a stroke. None of those apply to DJT https://t.co/D0CWxnGsPx

To some extent, though, I’m not really sure this isn’t something that shouldn’t be normalized. It is true that, as Anderson states, non-traditional First Ladies of times past were stepping in where wives couldn’t because they were dead or incapacitated. But that’s not a tradition that we necessarily need to hold on to, and it’s one that’s in increasing tension with modern times.

Eight years ago, Michelle Obama had originally suggested that she might not want to put her legal career on hold to attend to First Lady duties. She ultimately did, of course. To some extent, it’s possible that she had to. A lot of professional avenues are likely to be cut off when your husband or wife is the president. We’ve seen a glimpse of all of the conflicts that can occur with close family and business and the law is a business. There’d be all sorts of concerns about favoritism and the like. I’d probably be inclined to give Michelle Obama the benefit of the doubt on such matters, but it would be tricky to say the least. Jed Bartlett and Jack Ryan both had wives with careers, but they were doctors and that’s one area that’s likely to be pretty safe. But law, business, and even non-profits all represent a plethora of conflicts.

While she could prove to be a trailblazer for future presidential spouses that want to remain independently active, there is little indication that she plans to do any of these things. Even granting that, there isn’t really a huge problem here without looking for one. 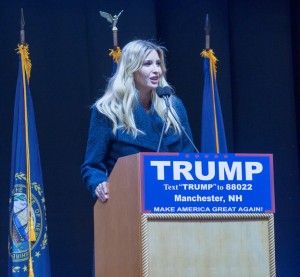 The biggest question, perhaps, is “What does a First Spouse do, exactly?” Some countries separate the Head of State job from the Head of Government job, and we don’t. That leaves a lot of Head of State duties getting shifted to other jobs such as the First Spouse and Vice President. They usually embark on some project or another like literacy or health, though not much is formally required. The more important duties seem to be social in nature. There is only one president and there are endless places where it would be nice for a president to be, so she can be used as a surrogate for funerals and trips. She can also accompany the president on trips. These are all things where you want to person doing it to want to do it. If not because they’re extroverted, then at least out of support for their spouse’s administration.

Along these lines, Melania simply saying she doesn’t want to is ultimately reason enough, career or no career. And if Ivanka Trump wants to do it, we could probably do worse and in the end she may be more qualified to do it and better at it. Melania’s forays into politics have not gone especially well. It’s not what she wants to do, and it’s not what she signed up for.

We probably ought to limit the extent to which having a spouse uninterested in being First Spouse is a political liability. There’s a lot to suggest that Mitch Daniels declined to run for the presidency in part due to the effect it would have on his wife. Whatever one thinks of Daniels’s politics, that’s not a good reason to lose a candidate. There were similarly a question about Jeb Bush’s wife, Columba, who is not remarkably social. These are issues that, in the greater scheme of things, shoudn’t be issues. If Chelsea acts instead of Bill, if Mitch Daniels has a sister or someone else he could lean on, and if Jeb were to bring in Jenna… the Republic would endure.

That’s not to say that I am thrilled with these developments as they pertain to Trump. I do think we would all be better served if Melania were to at least move to the White House. Among other things, I am concerned that Trump will be spending too much time in New York, and his wife and son being there may make no difference but may be a bad thing. If I thought this would result in Trump leaving the presidenting to Mike Pence I would consider that a good trade, but my guess is that while Trump may detach himself from details important to actually being president, I don’t believe he will cede decision-making to those familiar with said details. It’s a recipe for trouble.

I am not especially concerned at all of the alleged nepotism of Trump’s first three kids serving in an advisory capacity, nor of Ivanka having undue influence over her father. It was there for anybody to see that Trump relies on his daughter a fair bit, and thinking of her as the acting First Lady actually sort of helps conceptualize that. The concern with the kids isn’t that he will take advice from them or that they will be involved in the presidency, but the cross-pollination between Trump’s businesses and the presidency.

But when it comes to who takes the unofficial role of First Lady (or First Gent, someday), it’s not only a poor hill to die on, it’s probably not a good hill to even defend. I’m not wild about the prospect. I would, all things being equal, prefer First Ladies like the last few we’ve had. I also prefer governors who do not extramaritally cohabitate, politicians who are not divorced, and on and on. All other things have to be remarkably equal for it to make any sort of difference. That’s true of any president, but especially true of one who is otherwise a walking disaster zone.

{Ed Note: Lurking in the background of all of this are prurient rumors and jokes about Donald and Ivanka. I avoided them because they are not the subject of serious discussion. The subject matter isn’t funny for joking, and there is not enough there there for substantive accusation.}