Sofía Vergara Sued By Her Own Embryos 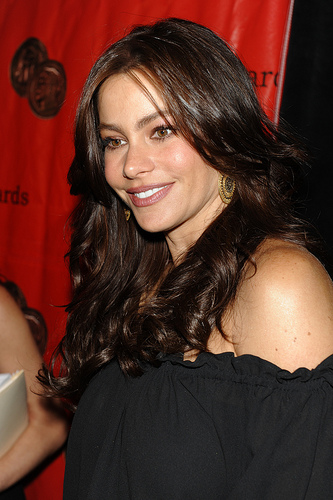 Over at the parent blog, Will Truman links to one of many articles floating around with the legally salacious concept that übersexy Columbian-American actress Sofía Vergara has been sued by her own embryos.

The basic story is this: Ms. Vergara (probably best known for her role on “Modern Family”) had a romantic relationship with a man named Nick Loeb. Mr. Loeb and Ms. Vergara apparently had serious discussions about having children together. But I’m guessing that Ms. Vergara did not want to interrupt or alter her entertainment career by altering her body with pregnancy and motherhood, so they used the services of a fertility clinic and created two embryos in vitro. Those embryos have been frozen and are in storage, and through the miracles of science we know they are female, and through other miracles of science it is apparently possible to implant them in a surrogate mother, in whom they would or at least plausibly could become viable and brought to term. Ms. Vergara and Mr. Loeb have since broken up, and Ms. Vergara no longer wants the embryos to be brought to term. Mr. Loeb does. So, there’s your basic disagreement.

Mr. Loeb previously brought suit in California to compel implantation of one or both of the frozen embryos in a surrogate. That suit wound up hitting a speed bump when Ms. Vergara’s lawyers served discovery on Mr. Loeb including asking questions about whether Mr. Loeb had, in any of his previous romantic relationships, paid for or otherwise consented to terminating pregnancies. Mr. Loeb refused to answer these questions on grounds of privacy and this resulted in some motion practice — which Mr. Loeb ultimately lost.

So rather than make those disclosures, on December 5, 2016, Mr. Loeb abandoned his direct suit against Ms. Vergara in California. Ms. Vergara’s attorneys had already filed and there was pending an independent motion to dismiss, and there may well have been judicial signals that the Court was amenable to granting the motion. As I can attest personally, such signals can have a powerful effect on strategic decisions.

This suit was filed on December 7, 2016, in Louisiana’s Jefferson Parish. The lawsuit can be read here, courtesy of the Daily Beast. The true plaintiff in the lawsuit is one James Charbonnet, who claims to be the trustee of a trust established for the care, upbringing, and education of the two embryos. It purports to be a direct suit by them, but Mr. Charbonnet also sues in his capacity as trustee of that trust.

Where it could get controversial is in the identification of the two purported plaintiffs, the embryos, who are each identified as “a female human being at the embryonic stage of life, five days old developmentally.” It may very well be an interesting question as to whether or not an embryo is legally a human being pursuant to Louisiana law. The complaint is marbled with pro-life political language. It specifically alleges that Mr. Loeb (the father) believes human life begins at conception, for instance, and that leads me to strongly suspect that Mr. Loeb at least concurs in the suit. The sexy legal allegation, of course, is that the suit purports to assert the rights of the embryos as independent human beings and claims standing to sue on their own behalves. 1

If an embryo is granted standing to sue, well, that’s a pretty significant victory for the pro-life movement, isn’t it? Take a moment and role-play the judge in Jefferson Parish getting this lawsuit. If your reaction is, “Well, crap, I’m in the damn soup now,” I’m thinking that’s probably pretty close to what the reality was (or will be when the judge realizes that this suit is on her docket; it’s new enough that as of today she may not even know that yet). And as I shall show below, there is every indication that this will become something that the plaintiff’s attorney in this suit will push to achieve.

With that said, it is not necessary for the judge to resolve this issue in order the adjudicate the disputed material legal and factual issues in the lawsuit. It is in this sense that I would expect the court to consider standing, because it’s not controversial that a trustee of a trust has the ability to bring a lawsuit — typically in the trustee’s own name — to accomplish and further the goals of the trust. I see no reason why the trustee, suing solely in his own name, could not in theory avail himself of each and every remedy prayed for in the complaint, without having concurrently brought purportedly independent claims on behalf of the embryos. In my opinion, a wise judge would hold the purported claims of the embryos in abeyance and allow the matter to proceed strictly under the aegis of the trustee in his capacity as the trustee.

The attorney on the suit is one James L. Arruebarrena, who keeps his principal office in the French Quarter of New Orleans and appears to be a competent, established, and reputable employment and personal injury attorney representing exclusively (or nearly exclusively) plaintiffs. This suit looks a little bit out of the ordinary for his regular practice — and the fact that he has out-of-state co-counsel strongly suggests that he’s serving only as local counsel as a personal or political favor to the real lawyer.

By “the real lawyer,” I refer to Mr. Arruebarrena’s co-counsel: one Catherine Glenn Foster of the Sound Legal Group in Washington, D.C. Ms. Foster will have to complete a petition to appear pro hac vice because she is not a Louisiana attorney, but that sort of thing is pretty routine. More interesting is Ms. Foster’s background; her LinkedIn profile signals that she is a pro-life litigation activist. This makes me strongly suspect that the real motive force behind the lawsuit is not Mr. Loeb but rather the pro-life movement with whom Mr. Loieb has apparently made common cause. Ms. Foster is no doubt considering that Ms. Vergara’s lawyers are private counsel, paid for by Ms. Vergara herself, and they don’t particularly want to present their client with the kind of bill that would accompany privately financing a political fight about the rights of embryos to the United States Supreme Court if necessary. I can’t help but imagine that Ms. Foster thinks this gives her an advantage.

Personally, I would have dispensed a word of caution to Mr. Loeb about these new friends of his had I been his personal lawyer. Something like this:

“These folks have an agenda of their own. To them, this is ‘Impact Litigation,’ a lawsuit brought to mold public opinion and shape public policy. Sometimes that political agenda gets aided when a lawsuit loses because it gives the activist an injustice to publicize. Given that you are not personally named as a party to this suit, these people are probably entirely capable of derailing your litigation objectives should circumstances ever come to pass that their objectives deviate from yours. They consider you dispensable, because in their minds, they’re trying to save millions of babies’ lives, and what could be more important than that? So they won’t want you to ever settle. They’re going to drag the fight on for years to try to get a ruling about whether those embryos can sue, even if Sofía ever agrees to let you put one or both of those embryos in a surrogate, even if the judge indicates that she’s going to make that order without deciding the embryos’ legal standing. So it’s easy for me to see how you could get what you want, but they don’t have what they want yet, and it’s far less clear that they can get what they want than you, so you might lose it all, or face a significant delay, while they do their thing. Now, maybe you’re cool with all that. I need you to be aware of this before you get into bed with them, so you make a decision to do that with your eyes wide open to those risks. Go think about it on your own before you decide.”

Not that I’d have expected such a speech to slow my client down one bit, because cognate speeches have never once changed my clients’ minds in the past, sometimes to their later woe. Like so many of my clients in the past, Mr. Loeb no doubt simply cannot imagine that his allies’ goals would ever be in any way different from his. He may well be a pro-life True Believer himself, which is his right and perhaps which may lens his personal agenda for the suit, which is also his right. Still, I’d have warned him, just in case. I shall presume that his actual lawyers did exactly this.