In my recent Tuesday Tech Links, DavidTC was asking about the Double Bubble airliner and why the two overlapping circles was better than an ellipse?  This is an excellent question and one that deserves something of an in-depth reply.  One of the reasons this is an excellent question is because we already have two very well known airliners that have non-circular cross sectional hull shapes: the Boeing 747 and the Airbus A380 (links go to a Google image search for the hull cross sections).

So it is possible to build an airliner with a non circular hull.  The 747 has a circular main hull and a semi-circular upper deck, while the A380 has an elliptical hull.  The reason such hull shapes were chosen has less to do with engineering and more to do with the economics of the aircraft, i.e. the extra structure needed to make those shapes work well was acceptable in order to gain the extra passenger capacity they would allow for on a large, long range aircraft.  The fact that both aircraft are high capacity, long range airliners is a big part of the reason those hull shapes are economical.

On a short range hauler, especially one that will be carrying primarily passengers and little freight, they make less economic sense.

Now how does the Double Bubble work?  Imagine a cylindrical pressure vessel, a scuba tank, for instance.  Let’s ignore for the moment the ends of the tank and just focus on the cylindrical part.  Once the tank is filled and pressurized, the force of the internal pressure will act equally in all directions upon the inner wall of the tank.  This will add some stress to the tank wall, as well as giving the tank an added bit of stiffness. 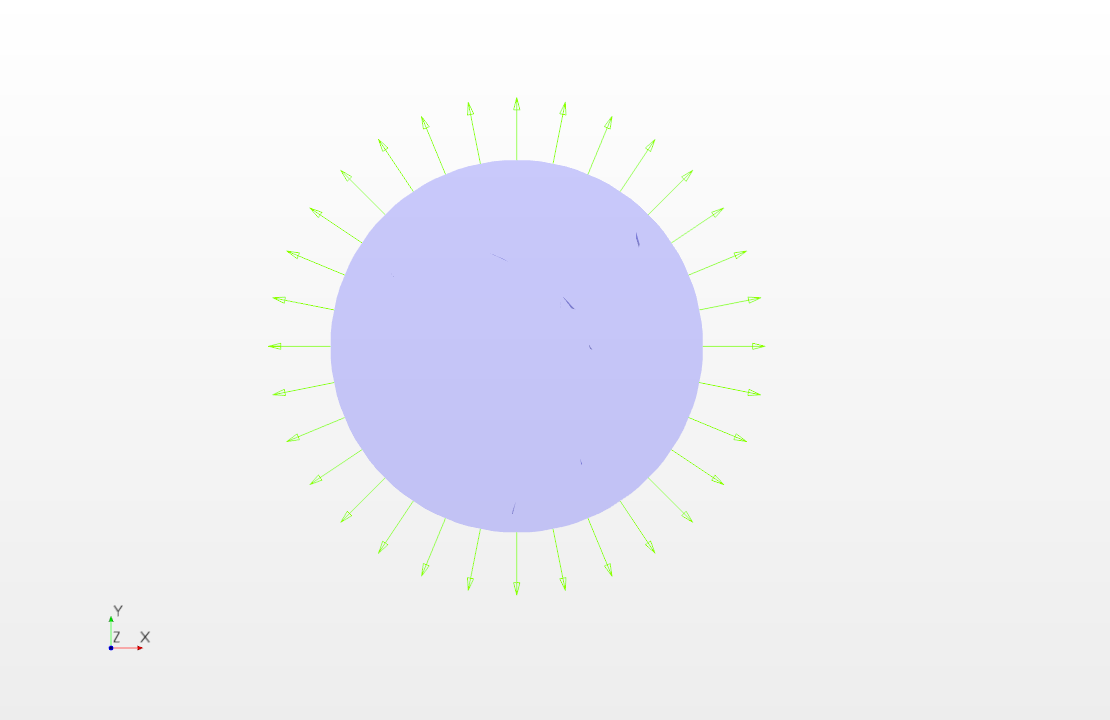 The force of the internal pressure is equal in all directions.

The force acting equally in all directions is important.  Those arrows in the above image represent the force vectors resulting from the internal pressure.  If we overlay a second pressure vessel, like so: 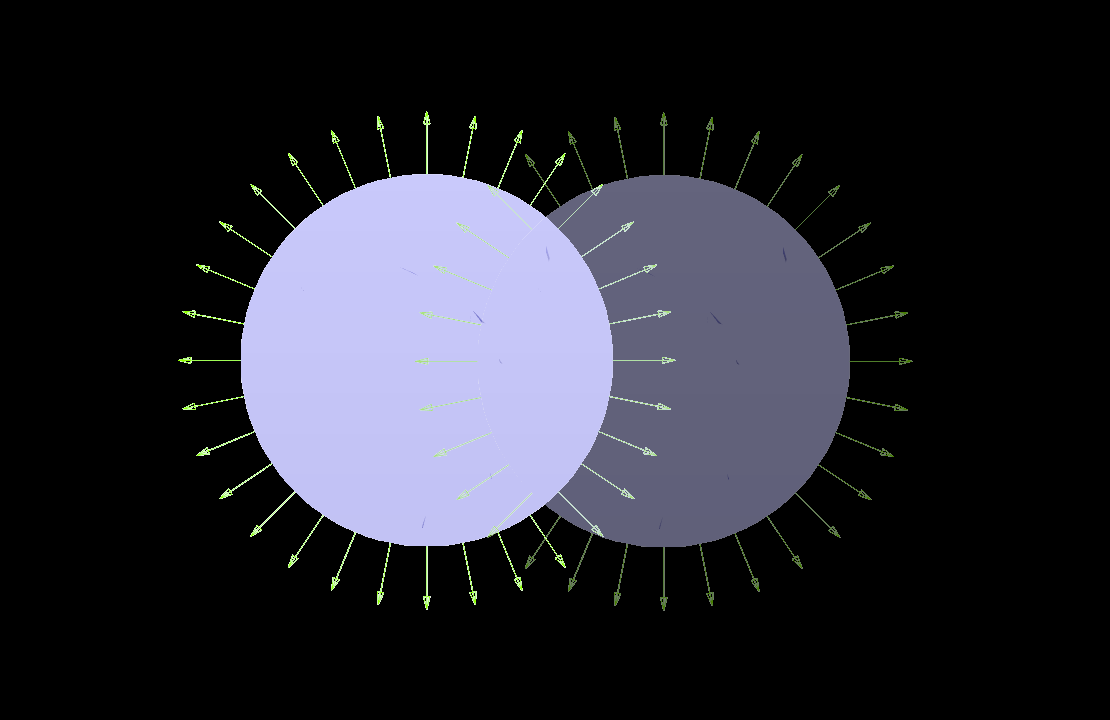 Notice how, in the area of overlap, the arrows are equal in size, but opposite in direction?  That means that they will cancel out.  To further this point, let’s say that the tank walls intersected neatly and the internal pressure was equal in both lobes and the middle section,  If this could magically be so, the internal walls would not feel the pressure, since it would be equal on both sides.  The force vectors would be zero.  If this is the case, those walls are not adding much to the structure of the whole, so we can delete them and get this: 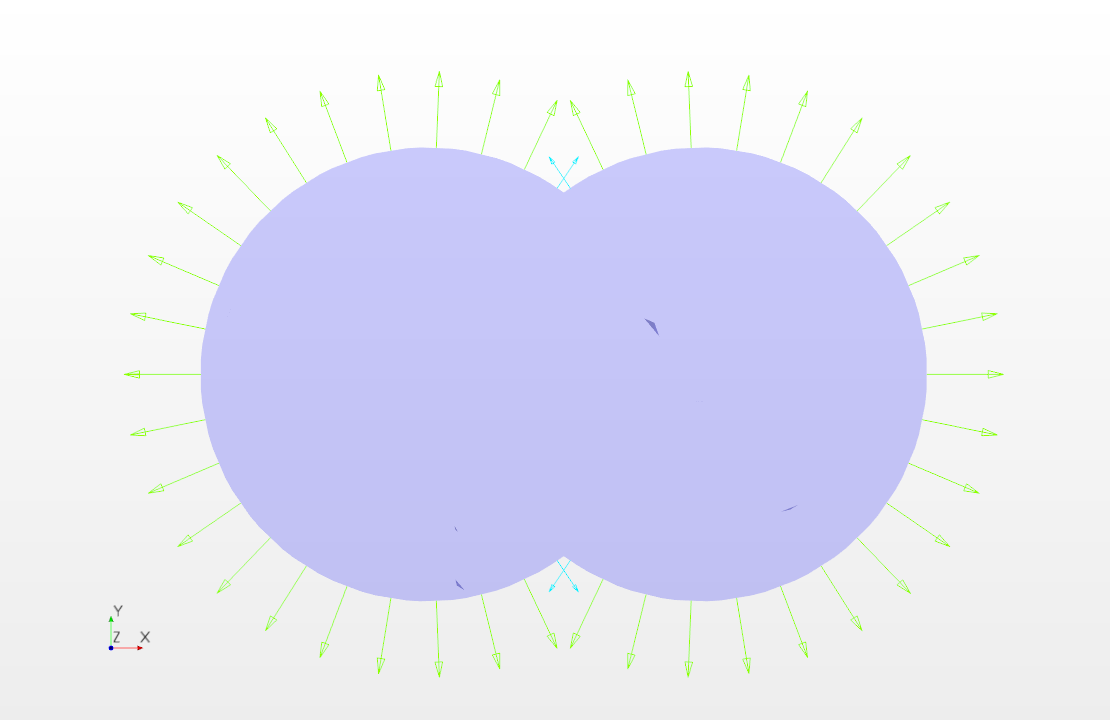 Of course we still have that join to deal with, and we must, because sharp corners are structurally bad (internal stress concentrates in corners, and the sharper the corner, the higher the concentration), so we cheat a bit and give the join a small radius of its own (a fillet) and then beef up the structure at that location enough to make it safe.

So why not an ellipse on it’s side?  One word answer – Windows.

If there is one thing aerospace structural engineers hate more than anything it is windows.  They hate them enough that a plane like this makes them downright giddy, and not because OLEDs are cool.  Windows killed the Comet.  Windows are a hole in the structure of the aircraft that can not carry any load through the glass, so the window has to be designed so the load is carried around it, which means extra structure, and load paths that are even more complex than they already are.  Seriously, if they could have OLED panels with camera links that were perfect, cockpits would not have windows.

So let’s look at an ellipse that is the same height as the double bubble hull above. 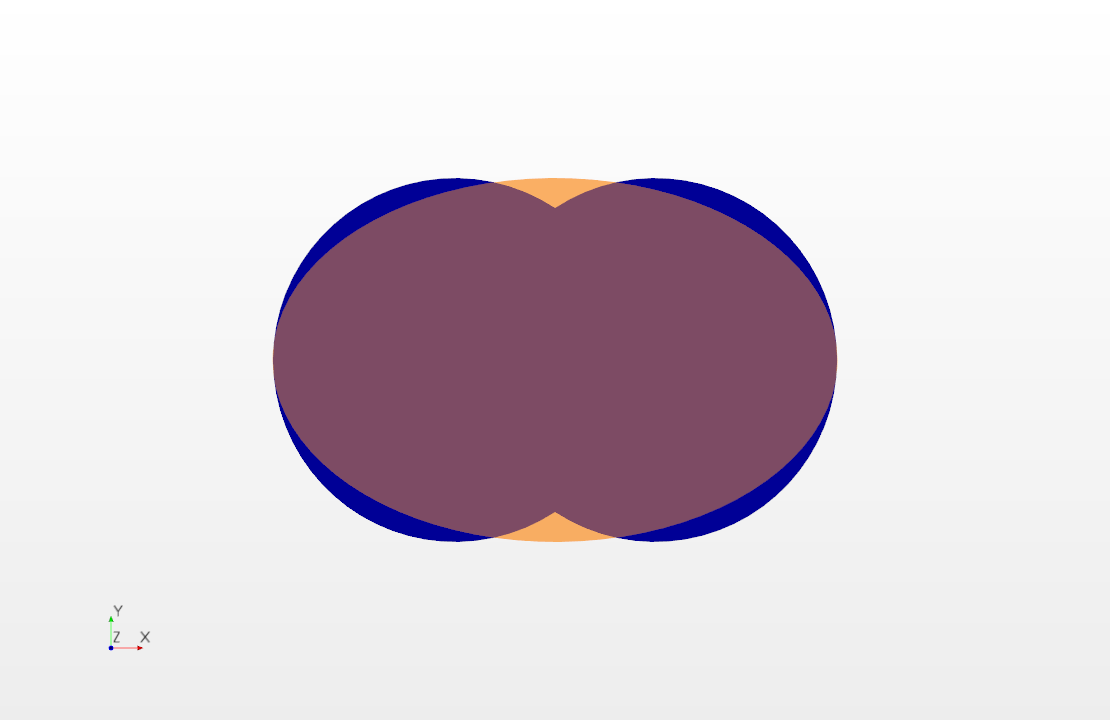 An elliptical hull that is the same height and width as the double bubble.

Notice where the windows would be, and how tight that is.  That’s gonna give you either very tiny windows, or very curved ones, and the structural engineers already hate you enough.  Of course, if we change the ellipse to have an equivalent curvature for the windows, we get this. 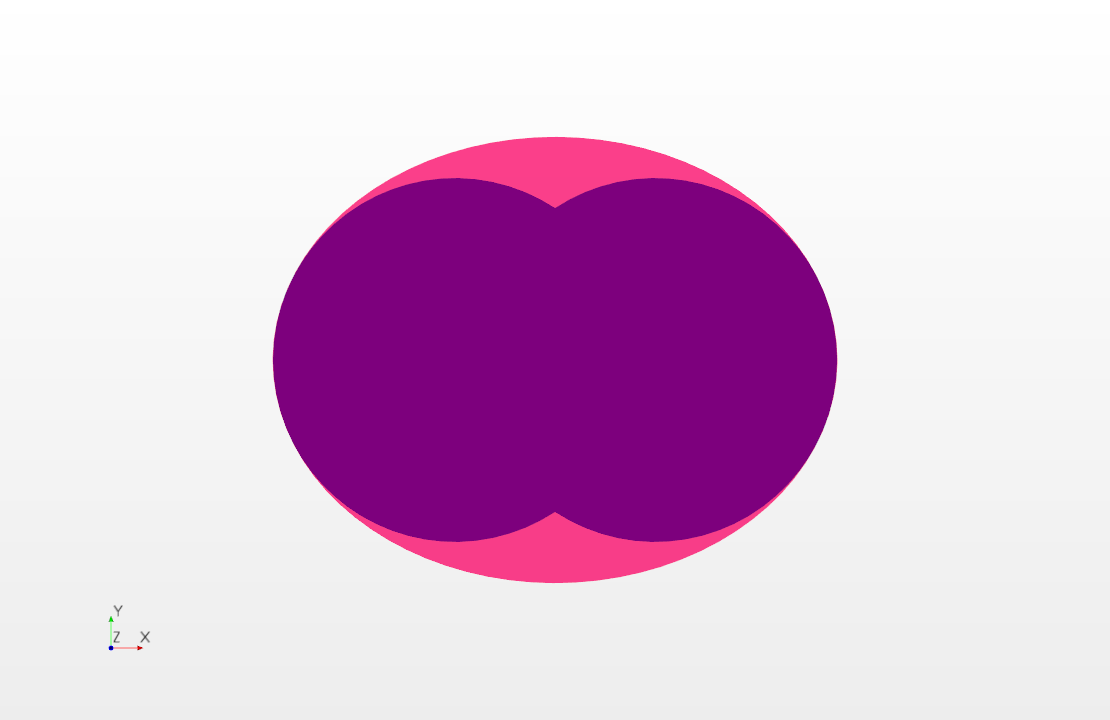 An elliptical hull with the same width and the correct curvature for the windows.

Well, damnit, at this point I’m not saving enough volume and weight to make this attractive.  How about one more configuration, a stretched circle. 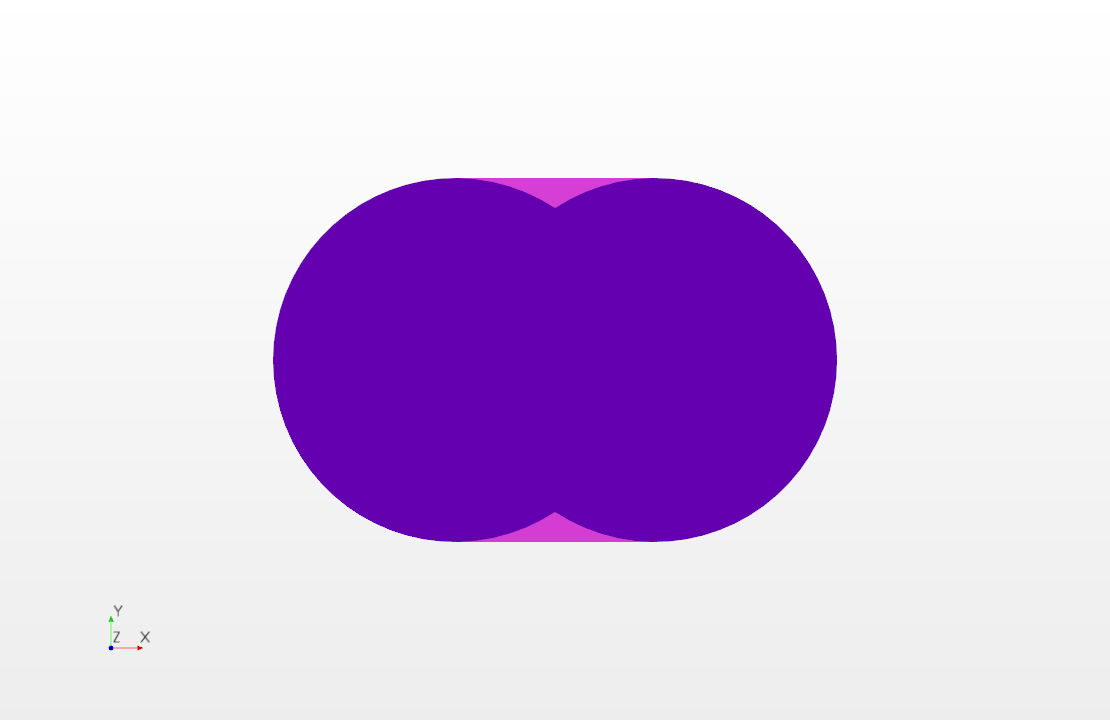 Right width, height, and curvature, and just a little bit of extra volume, but the loads through those flat sections are gonna be a mess because this is a pressure vessel.  We’d have to beef them up quite a bit, much more than the join has to be beefed up.  Now, if this was wide enough that it could serve as a lifting body, such that I could significantly reduce my wing area, this might very well be a winner, but I can get aerodynamic benefits just by adding lightweight aerodynamic fairings, so justifying the extra structure is a hard sell.

Other benefits of the design can be seen in the tail (the brochure is here, it should open in another window).  There is actually a lot going on here.  An airliner like this would compete with other short haul aircraft, like the 737 or A320.  One of the problems we have with those two aircraft is that it’s getting really hard to sling better engines under the wing because the engine nacelles are darn near scraping the ground as it is.  Current ground clearance is somewhere between 12″-18″, depending on the engine.  The full travel1 on the landing gear struts is just shy of that, so a hard landing can also mean a nacelle strike if the wing flexes too much, which will take that plane out of service for a while.  Tucking the engines in the back not only keeps your wings clear (reducing drag, improving lift), but also eliminates that concern and lets you have shorter gear if you want.

Looking at the tail some more, notice how it’s a double T-tail, instead of a normal empennage?  I’ve mentioned before about how T-tails are structurally expensive, so you have to have a good reason to use one.  Well a twin T-tail is a whole let less structurally expensive.  Still a bit more than a normal empennage, but still cheap enough that if you have a good trade-off, it can be worth it.  The T-tail, along with the furrow in the aft part of the hull fairing, act to form a channel that can help smooth out turbulent airflow as it enters the turbine intakes, which can simplify inlet design, reducing weight and cost, and improving efficiency.  One of the big reasons is air entering a turbofan can not be supersonic, and even though airliners do not travel at supersonic speeds, air travelling around the aircraft can locally become supersonic.  Shocks are really hard on turbine blades, so preventing them from forming near those blades is important.  If you can use a significant length of the fuselage as an inlet to shape and slow the flow, you make your life easier.  In the same flow stream, you can use the wake flow of the body to support the jet exhaust, improving it’s efficiency.

So final question, if the tradeoffs are good, why hasn’t this design been done before?  Well, it has, but in vertical arrangements (see Super Guppy and C-97), so it’s not exactly new, but the horizontal arrangement is now attractive thanks to materials like Carbon Fiber, which can form a strong join without adding too much weight.