There is a smug style in American liberalism. It has been growing these past decades. It is a way of conducting politics, predicated on the belief that American life is not divided by moral difference or policy divergence — not really — but by the failure of half the country to know what’s good for them.

In 2016, the smug style has found expression in media and in policy, in the attitudes of liberals both visible and private, providing a foundational set of assumptions above which a great number of liberals comport their understanding of the world.

It has led an American ideology hitherto responsible for a great share of the good accomplished over the past century of our political life to a posture of reaction and disrespect: a condescending, defensive sneer toward any person or movement outside of its consensus, dressed up as a monopoly on reason.

I was born and raised in Trump country. My family are Trump people. If I hadn’t moved away and gotten this ridiculous job, I’d be voting for him. I know I would.

See, political types talk about “red states” and “blue states” (where red = Republican/conservative and blue = Democrat/progressive), but forget about states. If you want to understand the Trump phenomenon, dig up the much more detailed county map. Here’s how the nation voted county by county in the 2012 election — again, red is Republican: 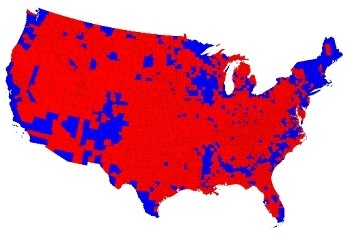 Mark Newman / University of Michigan The country is lava.

Holy c***slaps, that makes it look like Obama’s blue party is some kind of fringe political faction that struggles to get 20 percent of the vote. The blue parts, however, are more densely populated — they’re the cities. In the upper left, you see the blue Seattle/Tacoma area, lower down is San Francisco and then L.A. The blue around the d***-shaped Lake Michigan is made of cities like Minneapolis, Milwaukee, and Chicago. In the northeast is, of course, New York and Boston, leading down into Philadelphia, which leads into a blue band which connects a bunch of southern cities like Charlotte and Atlanta.

Conservatives believe, rightly or wrongly it doesn’t matter, that the media is biased against them. This shows up in such ways as: how any opposition to the ACA is painted as racist; accusations that even when the job they have is legislating, they aren’t governing; or, claims that if the branches of government that the Republicans have just taken back use the checks and balances that the constitution provides them, it must be because they aren’t serious senators. Couple this with accusations that every Republican running for President is akin to Hitler, and that opposition to amnesty for illegal immigrants being solely motivated by racism. (A claim supported by the one of the party elite no less!)

Is it any wonder that the party rank and file would jump at a solution that both those very same party elites and the media (which contains very few members of the political background that motivates these non-elite Republican party members) find abhorrent? That the talking heads of our media couldn’t see nor believe the rise of it? That the rank and file instinctively know that the left have no real ability to counter? Finding someone who the media couldn’t counter was of utmost importance, for all the reasons listed above, along with the most salient reason of all: the simple fact that if they want to win, they cannot play the game as set out by a media who say things such as What’s the matter with Kansas?

A jack move allows the player to stop the clock, bust a fortress, get a touchdown instead of a field goal. It can also cost you a game. Different from a Hail Mary, it attempts to change the rules, to force everyone to accept a new paradigm.