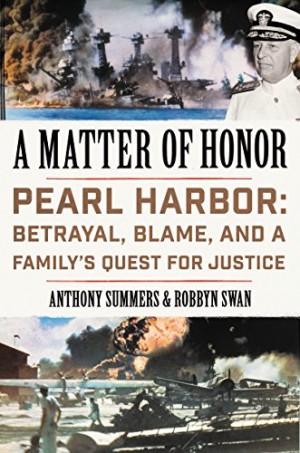 A dark cloud of conspiracy hangs over Anthony Summers and Robbyn Swan’s book A Matter of Honor: Pearl Harbor: Betrayal, Blame, and a Family’s Quest for Justice (Harper, 2016). The authors make the wise choice, I think, in addressing it right off in an author’s note: various theories about the Pearl Harbor attack of December, 1941, hold that members of the American or British governments, up to President Roosevelt, had foreknowledge that the Japanese were going to attack the US fleet in Hawaii and allowed it to happen in order to bring America into the war. The authors contend that they researched all of the supposed evidence of a conspiracy and found none of it to be solid.

Instead, they found something more disturbing in some sense: many individuals at the highest levels of government should have known more than they did in the days leading up to the attack and failed more due to human weakness and error than duplicity. The results were catastrophic.

When the Imperial Japanese Navy attacked the US Naval fleet at Pearl Harbor on the 7th of December, they killed 2,403 Americans, wounded 1,178 others, damaged all eight battleships, sank or damaged eight other ships, and destroyed 188 planes. But the blitz also annihilated American invulnerability and erased the isolationist cause overnight. It could be said that what arose from the ashes of that horrible morning was the world of American power in which we live today, for better or worse.

Understandably, Americans wanted answers. Why was the Pacific fleet stationed in a harbor with such a narrow opening that the battleships could only leave in a single file? Some likened Pearl Harbor to a fishbowl that could be easily shelled from above. Why wasn’t there better reconnaissance? Why were Japanese losses so light and their mission so successful? Given that talks with the Japanese had recently broken down and the Pacific theater was so important for Japan’s expansionist aims, why wasn’t Hawaii on high alert? Above all, how such a thing could happen?

A great deal of the obloquy was fired directly at the Commander-in-Chief of the Pacific fleet, Admiral Husband Kimmel. The Roberts Commission, convened by President Roosevelt, found Kimmel and Army Lieutenant General Walter Short guilty of dereliction of duty. The New York Times ran the headline:

ROBERTS BOARD BLAMES KIMMEL AND SHORT: WARNINGS TO DEFEND HAWAII NOT HEEDED.

Kimmel received letters urging that he kill himself, was stripped of his stars and command, and pushed to retire early. In Biblical terms, he was the goat sent into the wilderness after the sins of the people were laid upon it.

But was justice served? The authors contend that, in the aftermath of the day which will live in infamy, that infamy was unfairly distributed. In stark detail, they show the many ways the government failed Kimmel after he took command. He wasn’t given enough airplanes or materiel after numerous requests. The radar he was given was barely functional. The war plans he was given wouldn’t take effect until after war broke out. Military experts swore that torpedoes would be ineffective in water as shallow as the harbor, even with examples of successful bombing runs in shallower waters. They were convinced that a Japanese attack would be launched in the Philippines, instead of Hawaii. Most shocking of all, Kimmel wasn’t given access to the information gathered by the MAGIC cryptanalysis program, much of which strongly suggested that an imminent attack was planned for Pearl Harbor! In many cases, high officials simply assumed someone else informed him. No one had. The fleet was a floating target.

Summers and Swan do something remarkable in making the days leading up to Pearl Harbor into a nail-biter in which the tension is increased, rather than diminished, by the fact that we know how terribly it will end.

The authors do an exhaustive job, using a mass of documents and sources to show the numerous failures throughout 1941 in chapters that are darkly humorous, galling, infuriating, and very tense. Imagine a James Bond novel in which the spies and intelligence agents are either incompetent or altogether ignored. Summers and Swan do something remarkable in making the days leading up to Pearl Harbor into a nail-biter in which the tension is increased, rather than diminished, by the fact that we know how terribly it will end. It’s impossible to avoid the belief that the one man who did his job without error was the same who took the blame.

If I was to pick a nit, the book could use a bit more detail about Kimmel’s dishonor in the first chapters. We’re told that he was stripped of his stars and blamed for the attack to some extent, but without knowing the history, I wasn’t aware what a raw deal he was given until the final third of the book. Since, in the Internet future, we will all be infamous for fifteen minutes, (at least), the story of an outraged public responding with fury before the truth is in rings more than a little familiar.

With that said, the authors have done a mitzvah here: they’ve comprehensively exonerated a man who spent the last decades of his life trying desperately to clear his name. It’s extremely hard to read the book and not think the US President has a responsibility to restore Kimmel to his full rank.

[A Matter of Honor: Pearl Harbor: Betrayal, Blame, and a Family’s Quest for Justice will be released on November 15th. It is available for pre-order through Amazon.]