Way back in the dark ages of the Bush Administration, my wife and I moved to Tennessee, hoping to start a new life. One of the things I most looked forward to was getting a dog. In more than a decade of life as a renter in diminutive Los Angeles apartments, I’d never had either the ability under a lease nor the yard or free mid-day time to have a dog. So when we moved into my parents’ then-intended retirement house in rural Tennessee, one of the first things we did after getting the household set up was to go to the pound and adopt a dog. 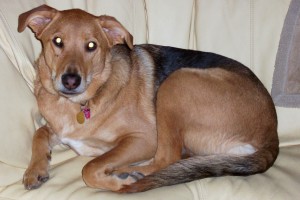 We named her Sassafras. The fellow at the pound told us that she was somewhere between two and three years old, and they’d found her as a stray under circumstances that they were sure she wasn’t going to be missed. 1 She came to us housetrained, fully grown but still playful like a puppy, and with mange. We took the picture to the right not long after the course of medicinal dips and shampoos had ended and her coat had grown in fresh and shiny. Sassafras was always averse to getting wet, I think because she remembered the sting of the mange medicine.

For the first year we had her, she chased her tail from time to time until she made herself dizzy. She played fetch with me in the front yard with a nerf football until my arm grew tired. I worked at home in the basement in those days, and when the heater broke and we didn’t have enough money to get it fixed, Sassy cuddled up at my feet so we could share warmth. She barked at our neighbors’ horses from a distance, but when the horses got close she’d tuck her tail and hide behind me, realizing only then just how big horses are. She only barked in the house to let us know someone had rung the doorbell because we’d obviously not heard it for ourselves.

She was a bird dog by instinct: I’d notice the remains of small birds like finches from time to time; in Tennessee once, I saw her jump and take a robin out of the air. I think that’s why she ate a poisonous mountain toad that’s indigenous to our desert community: she thought it was a bird when it jumped and instinct took over. (She’d possibly eaten frogs in Tennessee when she was a stray.) We spent thousands of dollars flushing the poison from her system, and that was five years ago. She had lots of good life after that: lots of play with other animals, lots of dog toys she chewed into oblivion, lots of people food snatched behind our backs or snuck to her from houseguests, lots of time snuggling up with her people on the couch watching us watch television. Her favorite treat was a thick, raw carrot and she got one every night before going to sleep.

At some point this year, she lost the stamina to go for walks longer than down the block and back, and then she lost interest in going for walks at all. Her muzzle turned whiter, she began walking slower, and she began losing muscle weight. Our other dog, smaller in weight and height, started acting like the alpha and Sassy didn’t seem to much care. Sassy spent nearly all her time sleeping, preferably somewhere near either my wife or I. In the past few months she began to have trouble standing up after taking a nap, and climbing up on the couch for a more comfortable place to sleep became difficult and then impossible for her. The past couple of weeks I’ve sometimes had to pick her up to help her stand, she’d grown so frail.

Yesterday she refused food and didn’t come when I called her. She just sat there and looked around, not even reacting to me saying her name or petting her. I took her to the vet. He looked at her chart, looked at her, listened to my story. She’d lost a quarter of her body weight in less than three months; her ribs were visible below her once-again patchy coat. The vet said he could do blood work and lab work and figure out what was going on with her and maybe even give some medicine to make her feel better for a while. What he didn’t have was a pill to make her younger.

I knew all this before I went there. I think I just needed to hear someone else give me some kind of permission to make what everyone will now surely console me was the right decision. You’re going to be right to say this, I know, and I thank you in advance for it. But still.

I took her home for one last night, so my wife could say goodbye too. We offered her lots of people food, and eventually she took some of it. She liked the bits of the grocery-store roasted chicken especially well. This morning she got sausage and eggs for breakfast, just like her people, and when it was time I had to pick her up to get her in the car again. She seemed spry and happy once we got to the vet’s office this morning, greeting the other dogs and wagging her tail. But she was still frail and has lost her agility. When I picked her up to help her out of the car and Sassy couldn’t stand on her own afterwards — that was when my wife started crying, and I wasn’t far behind her.

The vet tech gave Sassy a sedative, and my wife and I sat on the floor next to her. We said goodbye and petted her as she drifted off to her final dog sleep. Sassy always slept with her eyes half-open and blinking and this was no different. The vet had some difficulty with the paralytic because because her veins had grown so narrow. I realized that this was part of why her legs had grown so skinny and weak, why she didn’t wag her tail so much anymore. Sassy was unconscious by then, but we nevertheless stayed with her, scratching her in her favorite places and saying soothing words, until her heart came to rest.

Losing my mother earlier this year was obviously much much more painful than this. Mom died very suddenly, though; there was no warning nor any apparent decline. More to the point, I was not really involved with her death. My parents live in another state, and my father, not I, saw it happen and tried to revive her and dealt with doctors and coroners. I learned of her death by way of my father’s phone call from the hospital. Afterwards, I made phone calls, delivered her eulogy, and most difficult of all, interred her ashes at the feet of the Sierras, per her lifelong wish. 2 Not having any choices in the matter 3 somehow made coping and mourning easier. This is a very large vacuum upon my heart, one I still feel nearly every day though the passage of time has made this recede a bit. I think my father and I have grown a bit closer for it, but of course that’s not how you want that sort of thing to come about.

A pet’s death is, of course, much less significant than one’s own mother, no matter how beloved the pet. Thing is, I had to affirmatively do things to make Sassy’s life end. I paid money, signed paperwork, carried and drove her. I couldn’t even ask Sassafras what she wanted. Perversely, this morning, she seemed to still have good life in her and right now I’m feeling guilty about that.

Rationally, as I describe her last few weeks, it seems easy to say it was the right decision: the poor old girl wasn’t strong enough to climb on a couch or into the car; she refused her food; she could do little more than sleep nearly the entire day. So you, reading this, probably won’t have much trouble concluding “Yes, it was her time, and it’s just that her last day was a good one.” That’s reason talking. Emotionally? My family is smaller than it was at the start of the year, and I feel that acutely at this moment.

That is innate in life, or if you prefer, it is innate in death: when you love another, you know that one day, one of you will have to say goodbye to the other. Worse, you know that as life is lived, friendships and other loving relationships accumulate, so the momentum of life is that death comes to visit with increasing frequency as one ages. The only real balm is knowing that the love one enjoys before a time like this is more powerful than the experience of loss.