What Trump has in Common with a Subsistence Farmer

Word is that Donald Trump lost $916 million in 1995. People speculate he has carried over this loss since then, potentially paying absolutely nothing in taxes the subsequent 17 years.

By nature of where I live, I have friends who are farmers who have virtually no cash earnings and no savings. They pay almost nothing in taxes. I don’t think anyone has that much of a problem with that. Many would agree that people with no earnings ought to pay no taxes.

But these friends are workers. The capitalist equivalent are businesses and individuals who have assets that don’t earn anything in aggregate. Think, for example, of most airlines until a few years ago.

Should an airline that shuffles around millions of people each year yet earns $0 pay taxes? I would argue that they owe no income tax. They ought to pay payroll taxes and sales taxes and airport fees and fuel taxes and state taxes, but I’m OK with their income tax bill being $0 as long as they in fact haven’t actually earned anything.

Let’s pretend that our airline does this for two years:

Presumably, if we’re still OK with such a company not paying income taxes in one year, nothing changes when we’re talking about two years or even 18. This company ought to pay all its other taxes, but it is legally and morally OK to not pay income taxes as long as it has no income.

But really, this sort of result is pretty rare. You’re more likely to see something like this:

What should this company pay in taxes? A lot of people would argue that they owe taxes in year 2—the year in which it had positive earnings. I, and the tax system as I understand it, disagree. The company’s net earnings are $0 over the two years. There is little reason for this company to pay an income tax while the airline above does not. What ought to matter is the total amount the company earns, not the year in which the amounts are earned.

There are important limits to this, but the tax system is intentionally designed around this basic intuition. If you’ve ever realized a loss of more than $3000 in the stock market, you’ve probably had the opportunity to similarly “carry over” your losses to the next year to offset your income in the next year. Or maybe you refused on moral grounds and judge those who accept what TurboTax does for them automatically a tax cheat.

[O]ne thing working in Trump’s favor is that he sets up most of his business enterprises as limited liability corporations and partnerships.

As a result, he would have been allowed to apply a loss from any business he actively managed to offset the taxable profits he earned from his other businesses.

This is exactly how it should be. You should pay income taxes on your income. If your income is spread across three investments, you need to add the income from each investment and pay taxes on the grand total. This is not a dastardly scheme. It’s literally the simplest, most intuitive way to pay your taxes. It’s the same thing done by Berkshire Hathaway that people loudly commend for paying its share of taxes, and it’s followed by me when I add up the income from my army of interest-bearing checking accounts. And it’s what every tax filing program out there will do for you without asking.

In addition, as a real estate magnate, Trump has a slew of other completely legal tax breaks available to him.

Among them, he is allowed to deduct the interest on loans used to finance the purchase and development of properties. He can deduct the operating expenses and maintenance costs of his properties. 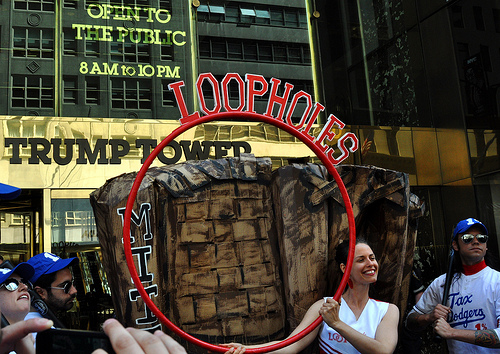 Sorry. This isn’t a real-estate magnate thing. If you sell $100,000 in donuts, you get to deduct all the costs associated with making, distributing, marketing, and financing your donuts. Actually, deduct everything that is an expense to your donut-making operation. If that’s $90,000, then you only have to pay income taxes on the $10,000 left over. This isn’t because of the donut lobby. It’s because that’s what income is; it’s what’s left over after your expenses.

Donald Trump seems to be an awful person. He shouldn’t be president. But there is nothing I’ve yet seen in the media about his taxes that seems more sophisticated or troubling than what you’d find in any Robert Kiyosaki book.