The Cubs Win the Pennant!

The Cubs are going to win their division. As I write this, 1 they have the best record in baseball by far and an absurd 16 game lead over St. Louis, in second place in the division. It would require a collapse of historic proportions for them to avoid the post-season. Let us, however, keep our eyes on the big picture. Nothing fundamentally has changed. The Cubs’ current happy position is mere prelude to their inevitable post-season collapse.

I present here a picture from the early days of the first Chicago dynasty, in honor of their impressive lead in the standings today. You can see a large version here. 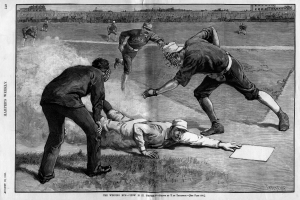 This is a fascinating image, from Harper’s Weekly of August 22, 1885. It is packed with items illustrating baseball of the time. First off, note the high quality. The technology was not yet in place to publish photographs, so images in newspapers were actual engravings. These did not come cheap. The quality of the craftsmanship varied wildly, but Harper’s was a quality publication and didn’t skimp. Many newspaper engravings were copied from photographs, but this one clearly was not. The technology to photograph actions shots such as this was still a couple of years away. This is an artist’s impression of events.

The subject of the piece is the climax of a game between the Chicago Club (not yet called the “Cubs”) and the New York Club (already known, unofficially, and apparently unironically, as the “Giants.”) played August 6 on the Polo Grounds. This was the original Polo Grounds, the first of three ballparks to go by that name, located just north of Central Park. 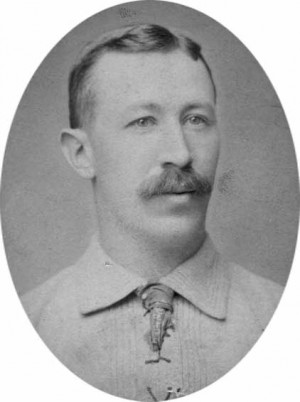 Chicago and New York were in the middle of a pennant race. Chicago would eventually come out ahead by two games, but it went down to the wire. The game depicted here also came down to the wire, with a final score of 1 – 0. We see here William “Buck” Ewing scoring in the tenth inning from third on a ground ball to second: an exciting moment! It is easy to see why Harper’s chose this.

So what does this image tell us about baseball in 1885? Quite a lot. But I am going to start with the bits the artist got wrong, because that’s how I roll. We need not assume that Buck Ewing slid into home with his manly countenance unaffected. The artist copied an available photograph of Ewing. The position of the catcher, (Frank “Silver” Flint) seems odd. They weren’t this shy about blocking the plate back then, and really, it’s hard to see what Flint is doing. He presumably has the ball in his right hand. How did it get there? The ball was batted to second, but the second baseman, and the other fielders, are crouched as if waiting for the play to begin. For that matter, the pitcher (John Clarkson, also entirely recognizable here) is appropriately coming in to back up Flint, but he is more than a little late getting started. In any case, Flint is nowhere near tagging Ewing. If accurate, this wasn’t actually a close play after all. My suspicion is that the artist wasn’t really a baseball guy. He was, as we will see, good at the setting and the equipment, but not on the actual action.

Next look all the way out, to the fence. There are no advertisements, yet advertising on the fences is well documented in this period. There are three possibilities. One is that the artist got it wrong. Two is that while some ballparks had advertising on the fences, the Polo Grounds did not. The third, and most interesting possibility is that the advertising was on the outside of the fence. I have always assumed that it was on the inside, but upon reflection I don’t think I had a good reason for this. Look also just inside the fence. You have to look closely, but those are horses and carriages. These were for spectators who need not rely on public transit, and who watched the game in the comfort of their carriages.

Now come in close. Home plate is square. The modern “house” shape came about the turn of the century, as a visual aid for the umpire in calling balls and strikes. With the earlier square plate a ball over the corner really was over a corner. Unfortunately, Ewing’s elegant cloud of dust obscures the pitcher’s position, so we can’t see that it is a rectangular box four by six feet, with no mound.

It is with the catcher’s equipment that this image really comes into its own. Both the catcher and the umpire are wearing masks, first introduced just eight years earlier, with the catcher’s cap artfully reversed to accommodate it. The masks here are an improved version. The earlier versions were less substantial and had a tendency to break when struck by a foul ball, resulting in impressive lacerations of the face. The catcher also has a chest protector. If you look closely you can see the neck strap. There had been some experimentation the previous few years, with the idea really catching on just the year before. The breakthrough was to make it inflatable. This may sound odd, but the technology remained in use through the mid-20th century. The umpire does not yet bother with a chest protector. They would soon learn better. There are no shin guards. Those would come in the early 20th century.

It is the catcher’s glove that I really love here. This was a fascinating transitional period in the technology. Catchers had been wearing gloves since the early 1870s. Contrary to what one often reads, I know of no contemporary indication that there was anything shameful about this. But they were regular gloves–think of what you might wear while gardening–and worn on both hands. The technique for catching a ball bare-handed is different from what modern American youth learn wearing baseball gloves. The idea is to catch it with both hands, drawing it gracefully into the chest to ensure control is maintained. Watch how cricketers catch fly balls. Catching the ball with one hand is a distant second choice, partly because the probability of success is much lower and partly because this is a great way to break your fingers.

Catchers started wearing gloves because pitchers were starting to throw harder. This problem only got worse over the course of the 1870s as the pitchers’ delivery moved from underhand to overhand. Catchers wore gloves on both hands because they is how they caught the ball. But they had to be able to throw the ball to second base, and gloves interfered with that. The solution was to cut the fingers off, so the glove really only covered the palm. At first these were improvised affairs, with manufacturers soon entering the market.  Catcher’s gloves constructed this way, with a bit of padding in the palm, were being advertised by 1878. The interesting thing is that both gloves were fingerless. Why not put fingers on the left hand? Apparently it was sheer inertia. Gloves come in symmetrical pairs, so if one is modified, so is the other. Eventually some budding genius realized that the left hand could be better protected, and full left-hand gloves started to be sold separately from the cut-off right hand gloves. These first appear in 1884:

A new style of left-hand glove for catchers has been brought out. The fingers are stiff cowhide, jointed at the bottom with buckskin. The finger-ends are stout enough to withstand the severest blow, thus preventing the breaking of joints, from which men behind the bat have so long suffered. (Source: Cleveland Leader April 4, 1884)

By 1885 they are being advertised by sporting goods manufacturers. Returning to the Harper’s picture, we can see that Silver Flint is wearing a full glove on his left hand. (Don’t be fooled by the lighting. That is an artifact of a fold in the page.) Flint is current with modern protective equipment.

It wouldn’t be current for long. About five years later, Harry Decker, catcher for the Phillies, realized that the left hand doesn’t really need to be able to catch the ball at all–that you can use it to merely stop the ball, controlling it with the right hand. With this in mind, he sewed a thick pad onto the front of the left glove, inventing the catcher’s mitt. He also has a spot in my heart reserved for early ballplayers who went insane, and I don’t mean crazy like a fox, I mean insane. But that is a story for another day. In the meantime, you can see his patent here.  What we see Silver Flint wearing here in 1885 is the transitional form. The essential leap has been made that the left hand can be more protected than the right, but no one had yet worked out the implications of this insight.

So in conclusion, the Cubs will lose in the NLCS to the Dodgers in six games. You heard it here first.