Running For The Job You Want

Why isn’t President Obama working instead of campaigning for Hillary Clinton?

To which Kate Rose pointed out:

Isn’t your VP a Governor? https://t.co/OkGehDeDBe

Almost always along partisan or primary preference lines, people criticize politicians who hold jobs seeking the presidency or vice-presidency instead of tending to the jobs they have. Every four years, like clockwork, we pretend that so-and-so is the first ever to miss votes, leave things in the hands of their lieutenant governor, or whatever else. This year’s target was Marco Rubio and, later on, Bernie Sanders.

Generally speaking, I view that as a matter between a senator (or governor) and their state. New Jerseyans lost patience with Chris Christie. Floridians may or may not have been bothered by Rubio (his approvals took a hit while he was running, but look good now). Vermonters seem not the least bit bothered with Bernie. All of these responses are reasonable. For the most part, my response tends to be pretty relaxed. For senators especially, but also governors. It’s a matter of state pride to have one of your own out there unless you didn’t like them to begin with. Even if I don’t like them, I can’t very well object to that guy neglecting his responsibilities if I wouldn’t object to someone I do like.

For it to matter to me, a campaign has to be pretty quixotic, or there has to be something particular about what they’re doing differently than everybody else who has one job and campaigns for another. 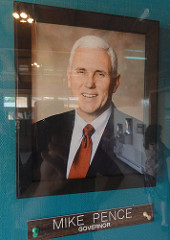 Image by Editor B

Mike Pence falls into that category. If I were in Indiana, I’d have wanted him to resign. Not out of disdain, but because from now until the end of his tenure (give or take a couple months), he’s going to be tied up with the election. From the day he was named until election day. Then he is either the vice-president elect, or more likely he is a term-limited governor who has about ten weeks left on the job.

Most governors are elected during mid-terms, and they would still have two years left to govern. Pence doesn’t. He does, however, have a lieutenant governor running to replace him. He could let that guy run the state and give him the prestige of incumbency going into that election. And give Indiana a full-time governor.

The other borderline case was Rubio, who had intended not to run for re-election. Given that Florida is a swingy state and has a Republican governor, he could have stepped aside, let Scott appoint someone to the job, and Florida could have had a full-time senator and Rubio could have avoided some bad publicity. However, Rubio wanted the paycheck and the platform, and benefited from the ability to change his mind on whether to run for re-election or not. Floridians seem to have forgiven him, but there is an argument that he should have resigned (though those criticizing him mostly just wanted him to stop running for president). With Pence, though, the only rationale (other than governing from November to January) is the paycheck.

Of course, the paycheck isn’t nothing when it’s your paycheck, I suppose. Earned or not.