I am not usually prone to feeling old due to the culture around me. This isn’t because I keep current, but because I am largely indifferent to it. I serenely walk past a rack of magazines at the supermarket checkout, neither knowing nor caring who are those people on the covers. Nor am I distressed by tech culture, by virtue of being a cheerful late adopter. It’s not that I am against tech. It is that I am against overpriced and/or stupid tech. The early adopters pay a premium to get an early, inferior version of what might, upon further reflection, have been a pretty dumb idea all along. By waiting a few years, I can weed out the stupid tech ideas and pay less for a later, improved version of the smart tech ideas. Life is good when other people are eager to pay to be guinea pigs.

Despite my normal defenses, I found myself feeling old this week, at back to school night. By way of background, I started spawning comparatively late in life. People sometimes assume my daughters are my granddaughters, and I can’t really complain, since our relative ages make this perfectly reasonable.

So my older daughter (we’ll call her Filia Major”) just entered third grade. We had back-to-school night this last week to meet the teachers. Her language arts teacher (“Praeceptrix Filiae Majoris”) is this sweet young thing, whom after a week and a half Filia Major adores. She is going over their daily routine, and includes that this includes daily instruction on “keyboarding.”

This captures my attention. I took typing in eighth grade. Indeed, it was the only useful class in an otherwise wasted year, and proficiency at touch typing has served me well ever since. Back in those days it would have been absurd to teach typing to third graders. (When I was in third grade we worked on keeping the clay moist enough to press the stylus into it.) But in this brave new world, typing clearly is a useful skill for the younger set to learn, so I approve.

But what exactly does the verb “to keyboard” mean? This is important because novices invariably want to hunt and peck, and have to be forced to touch type. Back in the day we used special training typewriters that didn’t have the letters on the keys. So I asked her if she was teaching the kids “touch typing.” This was met with a blank stare, followed by the reply that “No, we teach them to put their fingers on the home row.” I give her a blank stare back. “That’s touch typing.” “It is? We don’t call it that.”

This minor linguistic shift seem to have occurred entirely without my noticing it, and not all that recently. I feel old. 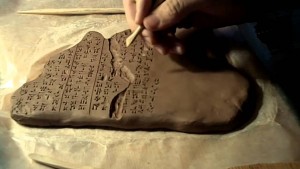