A lot of Republicans – including Rudy Giuliani – are trying to make an issue of Hillary Clinton’s health. With the exception of a photo here and there that looks less than flattering, this is mostly a product of her age. Some have argued sexism, but other than a general belief in sexism and female age, there’s just not much reason to believe that’s especially true. It’s not as though we haven’t been here before. 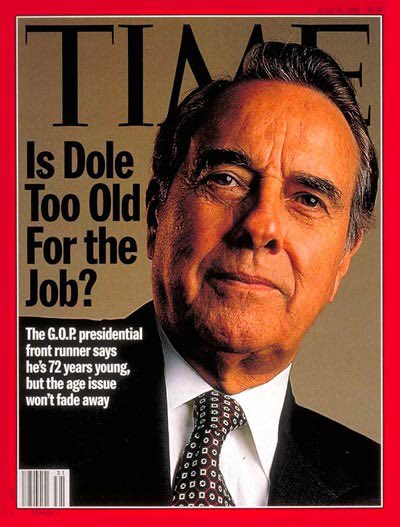 The media’s dismissal has lead to some accusations of media bias, because of Bob Dole above and John McCain in 2008. Hillary Clinton will be 69 before election day, Dole and McCain were 72. One could argue that 70 is the cut-off, but there’s no special reason it might be. More likely it’s that while there are allegations that Hillary Clinton has health problems, Dole and McCain both had actual infirmities going back to their war experience.

Now, surely, it seems cruddy to penalize those two men for serving their country. It’s not especially fair. But it is what it is. Bob Dole had to shake with his left hand, and John McCain can’t raise his arms and had skin cancer to boot. Sucks, but there you go. Also, both McCain and Dole were running against young Democrats, putting the age issue in play. It’s possible that if Rubio or maybe even Cruz (though he looks older than his years) had won the Republican nomination, we’d be having a different conversation. Or maybe not.

They aren’t the Republican nominee, however. Donald Trump is. Donald Trump is, of course, older than Hillary Clinton. Not by much, but if there is a cut-off at 70, they’re on opposite sides of it. And due no doubt to his own personal Vietnam, Trump’s health doesn’t look especially good for his age the same way that Mitt Romney (for example) does. So they have to fixate on things like “being helped up the stairs” and “leaning on pillows” in the absence of an argument.

Her age, though, is still stalking the background of the conversation. If she were younger, they’d likely find another avenue of attack.

What’s worth noting, though, is that despite concerns over their age and health, both Dole and McCain would have lived through their two terms. Dole is still alive now, twenty years later. In fact, presidential and vice presidential nominees have extremely impressive longevity.

If we jot down the timelines, only Kemp would have died in office (if we assume he takes the presidency after eight years). Ferraro might have been slowed down with health. Even Dick Cheney would seem to have survived eight years had he run and won in 2008, though his well-documented health problems would have made him a weaker president than might be preferable. We might argue that being president would have brought about their demise sooner from stress, but people who serve as president live long too. George H Bush is 92 and the last two presidents to die were Reagan (93, though significant deterioration before that), Ford, and Nixon (81). The presidency does not appear to take years from your life, however much it seems to gray your hair.

Now, ideally, we don’t want presidents serving up to their death because we worry about health and the ambiguity of dying. What we want to avoid more than a president who dies is a president who is not physically up to the task. Since their ailments were mostly private and they were out of the public eye, we don’t necessarily know when Kemp and Ferraro got kicked off their strides. Ronald Reagan was president, and we don’t know if he started losing his faculties while in office or not. And Woodrow Wilson.

Even so, you can’t predict death and infirmities. The only “near miss” we’ve ever really had was Paul Tsongas, who but for Bill Clinton (and/or a surge by Jerry Brown) probably would have been the Democratic nominee in 1992 and probably the president. He died in 1997, which would literally have been two days shy of the end of his first term. Since he was 55, his age provided no insights, but his history with cancer might have. Even here, though, we want to be careful. Otherwise we’re diagnosing on the basis of weight or other loosey-goosey criteria.

While we never want a president to die in office, or be unable to serve the functions of the job, it ought to be pretty low on our list of criteria. Running for president is tough, and if a candidate has the ability to do that (and there are no imminent concerns) it’s as clean a bill of health as I can imagine. Anything can happen, but that’s what we have vice presidents for. What we want is a president with the judgment to pick a good vice president, but more pressingly to know when they can’t fulfill the duties of the job anyway.

Good judgment, basically, which is what we want from a president in any event.