A strong earthquake in central Italy reduced three towns to rubble as people slept early Wednesday, killing at least 73 people and injuring hundreds more as rescue crews raced to dig out survivors with bulldozers and their bare hands.

The toll was likely to rise as crews reached homes in more remote hamlets where the scenes were apocalyptic “like Dante’s Inferno,” according to one witness. Complicating matters was that the area is a popular vacation spot in summer, with populations swelling, making the number of people in the area at the time difficult to estimate.

“The town isn’t here anymore,” said Sergio Pirozzi, the mayor of Amatrice. “I believe the toll will rise.” 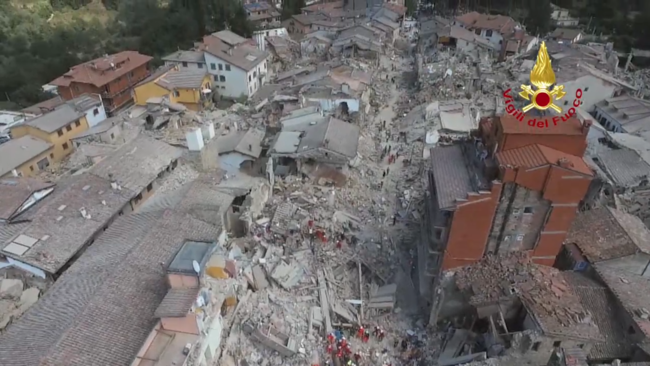 Still picture from a drone video taken over Amatrice, Italy this morning.

We don’t usually write anything editorially in linkage posts, but I’m going to deviate from that norm here. Ordinary Times offers its best wishes to the people of Italy and particularly to the families directly affected. There are many worthy causes, many disasters, and many tragedies; this one strikes close to home for me because I have family who live about 150 kilometers away from the epicenter near Amatrice (they are all doing fine). The Italian Red Cross is accepting donations in all currencies, and is involved in medical response and rescue efforts.