I Want to be Part of Western Civilization Too

I can understand the frustration of Representative Steve King.

Steve King Asks: What Have Minorities Contributed To Civilization?

I imagine if I were a Republican and were constantly bombarded with lazy accusations of racism, I would get frustrated too.

When asked why there only seem to be white people at the Republican National Convention. He responded by asking “where are the contributions made by these other categories of people that you’re talking to about? Where did any other subgroup of people contribute more to civilization?”

He then clarified that he meant Western Europe, Eastern Europe, and the United States of America are responsible for contributions to civilization.

In the subsequent fact-checking, journalists got to writing that civilization exists in other places of the world. There’s a Washington Post article out there noting that umbrellas and gunpowder, for example, were invented elsewhere.

This misses the point.

White people have made an outsized contribution to civilization. Whenever I go to a new place, I try to make new white friends. They are awesome. I can hardly imagine why my parents moved to the United States if not in recognition of the fact that there was something worth joining here, and the whole thing was and is run by white men.

Trying to score inventions and contributions is ultimately an exercise in subjectivity, and India not getting credit for the number zero isn’t what makes me want to take a chisel to Representative King’s car. 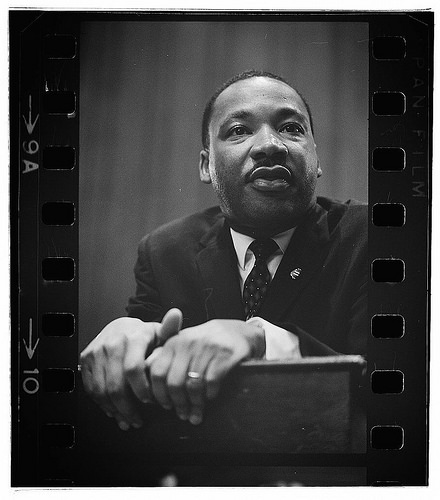 Alleged Christian contributor to Western Civilization. Image by The Library of Congress

What offends are King’s assumptions that are so basic that he skips right over them. To say what he said so readily, he has to believe that non-whites have no role to play in the Republican Party. And that would be bad enough, but the reason for that is that he doesn’t think non-whites have a role to play in Western civilization, which (no offense to the GOP) is considerably more troubling.

Less troubling to me personally, but nonetheless a thing that should bother people is that he doesn’t think Christianity has space for non-whites. That’s what allows him to look at the RNC floor and smile that his side has the right people on the bus.

The paradox of the modern Republican Party is that those of us who are not white and wish to assimilate with American culture and wish that even more for our children are told that they aren’t welcome by those who are most bothered by non-whites not assimilating. And if the words “you aren’t welcome” aren’t exactly what was said, “you people haven’t done anything worth noting in civilization’s 6,000 years” is an even more emphatic rejection.