So I was downtown yesterday, and after my court hearing I wandered down to the Grand Central Market. Amazingly, there was no line at Eggslut 1 so I treated myself to a second breakfast. Then I meandered zig-zag through the grid of downtown blocks to make my way back to the train station. At about Second and Broadway, I heard cheering and drums beating nearby. A block away, at Second and Main, I realized why there had been no line at Eggslut.

This was going on at LAPD Headquarters: 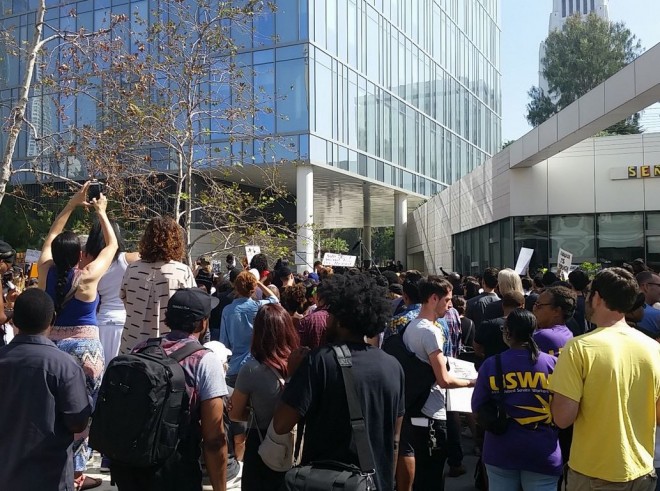 About two hundred people were there. Initially, I couldn’t hear a thing anyone was saying. I made my way around the corner to Main Street, and noticed several things before I could start hearing what was being said.

First, a sizeable number — thirty to forty of the roughly two hundred ralliers — were wearing some kind of union gear.

Second, there were roughly equal numbers of white people, black people, and Latino people in the crowd. All of the Latinos were wearing union t-shirts or union jackets.

Third, I was pretty much the oldest person there (mid-forties) who wasn’t speaking or covering the event for the media. All the speakers I saw were black. The youngest was about my age. More about him in a moment.

Fourth, there were a lot of LAPD cops around. This observation discounted the cops directing traffic in the intersections, who weren’t paying the least bit of attention to what was going on. I’m talking about blue-uniformed LAPD officers, all of whom had black bands across their badges to honor last week’s fallen Dallas PD officers. Stationed a half a block away in every direction, and then again at each intersection, there were pairs of foot patrol cops standing guard, making themselves conspicuous. Most of the cops were white, a handful were black. There were zero uniformed LAPD immediately at the rally itself.

Fifth, and I guess I shouldn’t have been surprised by this, no one engaged me. There was no literature for me to read, no one tried to engage me in any kind of conversation. Like I say, I think in retrospect this is less surprising than it should have been.

Sixth, I didn’t hear a thing the first speaker (who was likely not the first speaker of the rally) said. There was amplification equipment but for some reason it wasn’t pointed up or down Second Street. Only after snaking my way through the crowd at the corner of Second and Main and moving partly up Main Street could I hear what the speakers said. By then, someone new had taken the mic.

This was a guy about ten to fifteen years older than me, whose remarks that I heard began with a remark to the effect that the next victim of police violence might be white, might be black, might be your children or his, you just don’t know, so that’s why it’s important to put a stop to it for everyone. I liked that. I applauded. He said that a lot of the white faces he saw were there, no doubt, because they’d seen videos of things that black folks had been telling them about for years, and he was glad we’d come to support them because it was gong to make things better for everyone. He then led a group sing of We Shall Overcome. I sang along with everyone else, because I think that you ought to survive your next encounter with the police and it’s just wrong that I can take that for granted while not everyone else can.

Then, a speaker about my age took the mic and began explaining that there was hard work ahead, not just a lot of singing and dancing. This somehow related to the fact that he and — so he thought — everyone else there hadn’t voted for Hillary, the way Chief Beck had. 2 “We all voted for Bernie Sanders!” Murmurs of agreement and affirmation, from some but not others. “And look, we gotta dismantle the system!”

Oof. Why’d you have to go there?

And he repeated that phrase — “dismantle the system” — three times, before I started to feel unwelcome, and slipped away. I’m not in favor of dismantling the system and I don’t think that sneering at Hillary Clinton is a particularly wise political move for the Black Lives Matter movement. 3 But most of all, the “dismantle the system” call kind of turned me off.

I’m quite sympathetic to calls for reform in police training and better relations between the LAPD and the African-American community here in Los Angeles. And I’m all for more non-lethal force being used in patrols and for cops not shooting people just because of their race. But now, I found myself told that I had to advocate “dismantling the system” and that support for Hillary Clinton somehow makes someone too conservative to be on the spectrum of acting in good faith. No longer was I interested in participating.

I realize that these were the sentiments of a single person, not necessarily what the #BLM organization is about. I realized that #BLM is in no small part about expressing outrage, righteous and justified outrage, at the conduct of authorities towards the disadvantaged and I am in a position of holding a pretty healthy dose of privilege. But I’m also the guy who prosecutes race discrimination cases precisely because I see employers treat people badly, especially black people. I’m a guy who has sued LAPD for violating the civil rights of young black men who had been framed by LAPD officers for a crime they demonstrably didn’t commit. I’ve got at least a small bid for ally status.

After all, I had a train to catch, back to a part of California where six out of seven of my immediate neighbors think that supporting Hillary Clinton makes one too liberal to be on the spectrum of good faith. I guess they make an exception for me because I always bring the beer and don’t have a problem with their guns. 4 And I had to ask myself whether this was just (“just”? As if that wouldn’t have been sufficient reason?) a rally about last weeks’ terrible events in Baton Rouge, St. Paul, and Dallas.

So seventh, upon return to my office, I did a little research and learned the local reason behind the rally — to protest the mildness of the Police Commission’s criticism of two LAPD officers who shot a woman to death last year. The rally apparently moved to City Hall but there was no violence and no arrests. No one was breaking any laws that I saw, just protesting the Commission’s decision as is their right. I confess to not knowing all of the details of the shooting, but it sure looks bad. Still, because no one engaged me about the rally, and there wasn’t even a pamphlet or literature, I really didn’t know that this was what was going on or that it was going to come to this:

Now, maybe one speaker took things a little bit too far, and maybe there was a lot more going on than I really could fully understand or know. In the moment, I didn’t know what exactly was going on, exactly why there was anger, but at the time I didn’t feel like I needed to. What I knew was there is reason to raise my voice and say, along with many other people, that things aren’t the way they should be.