Warning: If you’re frightened by ghosts, demons or spoilers, turn back now!

The horror genre is prone to a lot of junk, particularly sequels.  How many “Halloween,” “Friday the 13th” and “Nightmare on Elm Street” films are there?  Any how many are worth watching?  So color me surprised that director James Wan returned for “The Conjuring 2” and delivered a supernatural thriller rife with tension and human drama.

Once again, “The Conjuring 2” follows real-life and controversial investigators Ed and Lorraine Warren (Patrick Wilson and Vera Farmiga).  It’s not a sequel in a developing-the-adventure sense.  Ed and Lorraine are still investigating paranormal activity, Lorraine still has visions that fill her with doubt, and Ed is still committed to the cause.  Rather, it’s another adventure with the Warrens.  This one takes place in London, England in 1977.  One of four children, Janet Hodgson (a really good Madison Wolfe), experiences strange and escalating supernatural events that eventually become apparent to her mother and siblings. 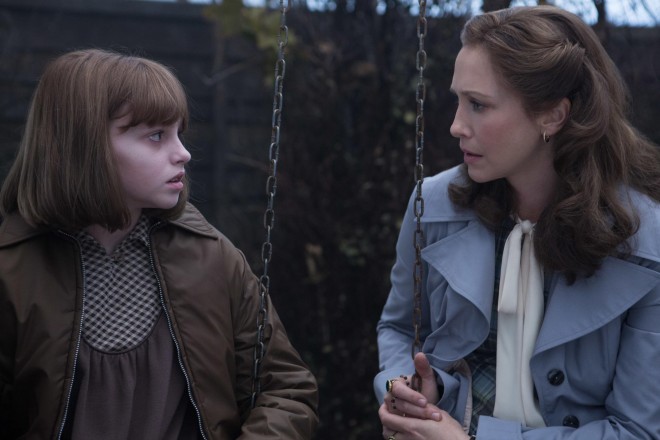 Wan and his screenwriters, Chad and Carey Hayes as well as David Leslie Johnson, understand that in order to make the horror elements stick, you need compelling characters.  Like M. Night Shyamalan (well, his good films anyway) and Steven Spielberg (the Grand Poobah of marrying the familial with the supernatural), they imbue these people with humanity such that you’re that much more concerned for them.  The film doesn’t quite reach the heights of its predecessor in this regard.  There are a few instances of characters making silly decisions just to get us to the next scary setpiece, like walking down hallways they really shouldn’t walk down.  Still, Farmiga and Wilson have as much chemistry as ever.  And a singalong to Elvis Presley’s “Can’t Help Falling In Love” is as goofy as it is endearing.

Wan’s camerawork has developed and become more audacious.  A long tracking shot lays out the geography of the Hodgson household (good!) while also occasionally gliding through windows in a distracting, attracting-too-much-attention sort of way. (Bad!)  The director is at his best when he keeps the camerawork simple.  A series of quick pans back and forth between a ghostly reflection in a mirror to the empty space where it should be is endlessly creepy.  One of my favorite shots involves Ed questioning the entity that’s taken possession of Janet.  Director of Photography Don Burgess keeps the focus shallow such that we can only clearly see Ed in the foreground, facing away from the out of focus Janet in the background.  As he questions the apparition, we’re given just enough visual (and audio) cues to let our imaginations run wild.

Speaking of sound design, it’s pretty great.  Both “The Conjuring” films rumble and rattle like no other.  I’d wager you could get sufficiently creeped out just by listening to some of the foley work.  Like the use of the camera, the film works best when the audio is more sparse and stripped down.  Wan occasionally leans a little too heavily on composer Joseph Bishara to underline the scares.  I’m thinking about an instance where a toy fire truck moves all on its own.  The moment is accompanied by an immense stinger that dissipates the tension.

As I exited the theater after “The Conjuring 2,” my friend remarked that the ending was so upbeat he anticipated a fake out or the other shoe to drop.  I think it’s a testament as well to the quality of the drama.  You feel as though these characters have been in real peril and there’s genuine catharsis.  Everything seems okay now.  Let’s hope it stays that way.