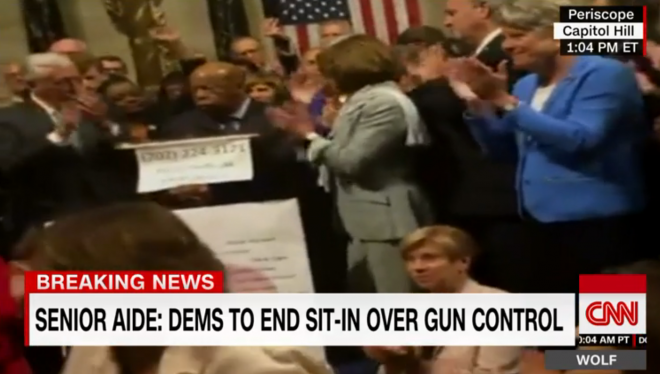 As I write this, it’s just been announced through various Hill flunkies that the Congressional Democrat’s gun-control sit-in is about to come to an end, less than 24 hours after it started. This will no doubt come as a relief to Speaker Paul Ryan:

It pains me to say what I’m about to say, because I kind of think Ryan needs to have his feet held over fires for his continued partisan endorsement of a candidate that even he admits would be ruinous for the country. But I’ll say it anyway:

I know from my own Twitter feed that liberals and lefties are cheering the gun-control sit in. But what are they cheering, really? The bravery of a group of elected officials who shared a few hours standing up to The Man, and then, as soon as reporters had a shiny new SCOTUS decision to focus on, decided to pack it up and hit the showers? The whole affair reeked of Ted Cruz and FOX News: The replacement of difficult, sweaty, roll-up-your-sleeves, spit-in-the-palm, honest-to-God-damned governing with a purely symbolic and entirely meaningless gesture for the cable-news set.

Call it the Twitterization of government: The lazy willingness to upend your own applecart without any serious attempt to create actual change, all for the endorphin-buzzed thrill of seeing your hash-tagged name trend for a few hours.

Look, liberals, gun control regulation might be a thing about which you are deeply passionate. It should be. Even so, I would think twice about cheering last night’s protest as precedent. Today it was your heroes championing your cause; tomorrow, however, it’s likely to by Steve King and Louie Gohmert. And it’s even worse that that, because the Rush Limbaughs, Sean Hannitys, Donald Trumps, and Brian Fishers are always going to be better at this kind of pointless circle-jerk than you guys. The battle to see who can be the loudest while turning government into a meaningless, ineffectual circus is simply a war you cannot win.

Because here’s the thing, liberals: When you give in to the FOX and Talk-Radio mindset that the purpose and function of government is to create Tweetable, 24-hour-news-cycle dramas for you rally behind, you’ve already lost the war.

That’s not to say that you shouldn’t keep fighting for gun-control regulations. You should. But if you’re going to fight, then actually roll up your selves, put your congressman on speed dial, and mother-fishing fight.

‘Cause your strategy of sitting back and retweeting the world’s lamest slumber party ain’t gonna get you jack.