What good is sitting alone in your room? 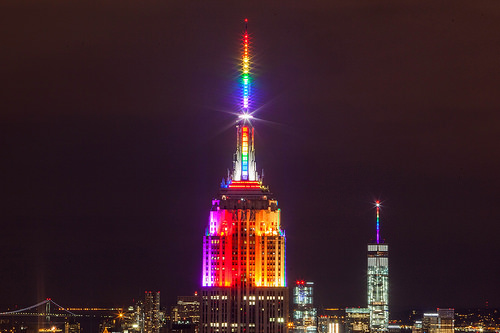 The first gay bar I ever went to was called the Cabaret.

It was kind of a dive, and had a dance floor the size of a postage stamp. (They eventually expanded it, but the Cab that I remember best involved a sardine-like dancing experience if the song was any good.) There were drag queens, and occasional musical acts, and strippers from time to time. But what it mainly was was a place full of other gay guys.

The first time I went was at the behest of the guy I was attempting a long-distance relationship with, who was paying me a visit. I was only 19 at the time, so a fake ID had to be procured (I think I borrowed someone’s, but that detail is lost to memory). I actually ended up having a pretty lousy evening, as he spent the whole time dancing with someone else. (The less said about that idiotic stab at romance, the better.)

However, he got me through the door. Chances are I’d have made it there eventually anyway, but I’ll give him credit for giving me enough of a push to step into the gay world in a way I never had before. My first tentative stumbles in that direction had been entirely virtual, facilitated by Internet Relay Chat (which is where I’d met him). As my eyes were getting used to the light after exiting the closet, I looked around blinking and realized I had no clue about what it meant to be an out gay man.

The relationship was soon over, but I made my way back to the bar.

Over time I came to make friends with a group of young guys like me who showed up there regularly, too. One of them had a family I came to spend so much time with, it may as well have been my own.

This past weekend, a violent bigot with an assault rifle entered a gay bar and murdered at least 50 of the patrons there. While the victims may not all have been gay men (I know of one woman at least who died, who worked there as a bouncer), it was gay men who were specifically targeted. The father of the murderous shit who did this is on record describing his son’s disgust at seeing two men kissing.

It is fine on a certain level to describe the attack as against American values and freedoms, and against American people as a whole. The violent thug who perpetrated it hitched his wagon to Daesh’s train of violent thugs, and clearly wanted to align himself with a movement that despises America. Fair point.

But he chose gay men, during Pride month no less. He chose us because he hated us. And that fact matters.

Being a gay man, at least back in the 90s in the Midwest, meant a fair amount of navigation. It’s gotten better since, I see, and it was a lot better then than it was in the decades before. But it was still fraught.

How comfortable could you be, letting people know you were gay? How safe, in certain places and certain gatherings? And if you were maybe not sure if that other guy was gay, was it worth the risk of asking if he wanted to grab coffee sometime?

Not so in a gay bar. There you could kiss your boyfriend without worrying who saw you. If a straight guy happened to be there, it was his problem if he didn’t want guys flirting with him, not yours. It was safe.

Even now, if I feel like belting out showtunes and not giving a damn if I’m flaming like the Human Torch, there’s a piano bar not far from me where I can do so with abandon. It was at a gay bar two years ago that my husband and I rung in the New Year with two of our (straight) closest friends, marking the advent of 2015 while listening to a torch singer. Find us a reliable overnight babysitter, and there’s a decent chance we’d find ourselves at a place like Pulse if we felt like driving to the nearest big city.

The worthless bastard who did this did it in the place where we go to be ourselves.

Anyone who opts to offer commentary yet chooses to ignore that very important fact doesn’t deserve our respect, let alone our attention.

Last year I desperately wished I had some way to make it back to New York for Pride. After all, we had so much to celebrate.

The Supreme Court had told us that our relationships were equal under the law after all. Even though the state where I live had passed marriage equality by referendum, reading Justice Kennedy’s decision for the entire nation made me choke back tears. I knew Pride would be bursting with joy.

My own history with the celebrations dated back several years, and was connected to another Supreme Court decision. Lawrence vs Texas had just been decided, and suddenly our private lives could no longer be used to prosecute us anywhere in the nation. I was getting over a somewhat painful break-up, but I figured if not that year to go to the parade, then when?

And that’s where I met my husband.

Since then, we’ve marched in parades a couple more times in New York or Boston. It’s actually become something of a running joke that we show up in a city during Pride and don’t even know it until we get there. As we were driving into Boston to get measured for the suits for our (second) wedding, we noticed all the balloons and people wearing rainbow colors and laughed when it dawned on us that it was Pride weekend and we’d totally failed to notice.

As same-sex marriage has become more normative, and gay families more common, there’s been some discussion about making Pride celebrations more family-friendly. It’s a tension I’ve felt myself. On the one hand, Pride means go-go boys and flamboyant drag queens and why should our scene be painted in more muted shades? On the other, I’m not 100% sure I’m ready to explain to my first grader why some guy is kitted out like a horse. (Look it up.) Like any movement that faces questions of assimilation vs identity, ours has to figure these growing pains out.

We hadn’t planned on attending Pride events this year. We have made plans to do so next weekend after all.

The Cabaret closed years ago. I took my husband back for a trip to the city where I used to live, and it was gone. Guess those renovations didn’t pay for themselves after all. And it was hardly perfect even when it was open. It was a little bit seedy, and I didn’t always have a great time when I was there.

I’ve never been to Pulse. But I’ve been to countless places like it, because those are the places I go when I want to be surrounded by people like me. And it’s why I spent yesterday messaging and texting everyone I’m still in touch with from the old bar to tell them I still love them.

The gay community is resilient. We weathered closets and plagues and discrimination. But this was an attack against us, plain and simple, and I will not see that fact erased or denied.

The thing about terrorism is that it ultimately fails. People still run in Boston and people still buy kosher groceries in Paris. Pride parades still went on yesterday, and they’ll still continue for the rest of the month and in the years to come, even if I never attend another one myself.

But we’re showing up next week anyway. One more family won’t hurt.

Daniel Summers is a pediatrician in New England, formerly known hereabouts under the pseudonym Russell Saunders. He contributes to The Daily Beast, and his writing has appeared in Salon, Cato Unbound, iO9, and The New Republic. You can follow him on Twitter @WFKARS