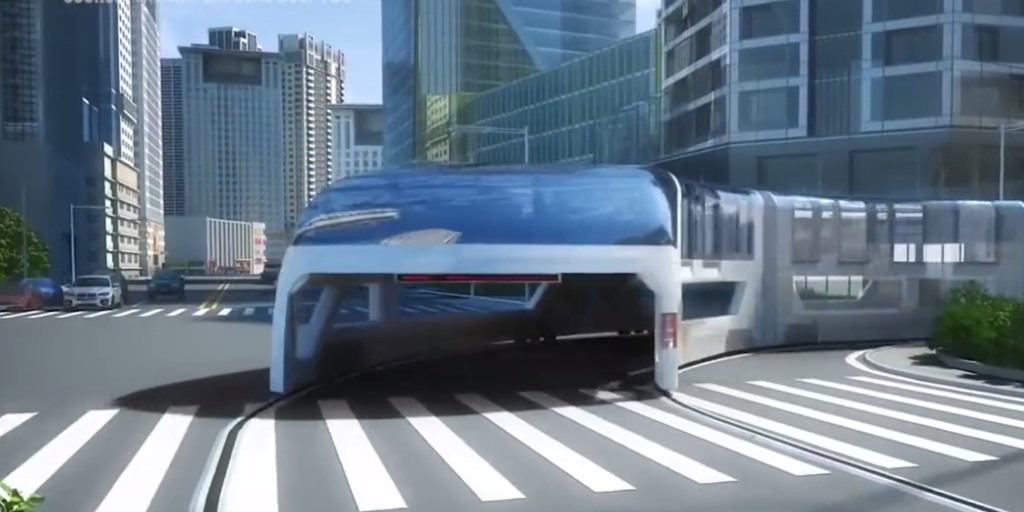 It’s been a while since I did one of these, but I have a few links I’d like to talk about and see what kind of discussion I can foster, so here goes.

Look, out on the arterial!  It’s a train!  It’s a bus!  It’s a trolley?!  All of the above, kind of.  I actually like the idea of the Transit Explorer Bus (TEB) for public transit, as I think it does a fair job of trying to hit the pros of public transit while covering some of the cons.  If you don’t want to follow the link, the idea is for a ‘bus’ that has sufficient ground clearance to let cars pass beneath it.  The ‘bus’ would straddle two whole lanes of traffic and ride on rails embedded in the roadway.  Normal passenger vehicles and light trucks could easily pass beneath it, so they can pass the bus if it’s stopped, or be passed by the bus if traffic is jammed up.  Riders would load and unload from elevated platforms, or via ramps.

As with all transit, the key is how it would be deployed.  I particularly like it because something like this would make it possible to easily extend rail transit to the Seattle suburbs, since it could largely follow existing arterials and highways/interstates without consuming capacity on those roads.
—————————————————
Lockheed is pretty determined to try and bring airships back into wider service.  I’ve always been a fan of airships, especially hybrid airships that shape the gas bag such that it serves as a lifting body.  The only two major drawbacks to hybrid airships are speed (they are most certainly not fast) and the cost of the helium gas (they are also rather weather sensitive, as you really don’t want to be trying to take off or land one during a storm).  Helium is getting expensive, and it is largely sourced from natural gas production (it tends to get trapped underground with natural gas, so we can separate it out).  Helium is also a very slippery molecule and will find a way to escape pretty much any container you put it into.  Even the best bag we can make is going to have a steady stream of escaping helium, so the bag will need to be topped off regularly, adding to the operational cost.  Still, I wouldn’t mind seeing airships as a regular sight in our skies.
—————————————————
Dr. Frances Arnold won the Millennium Technology Prize for directed evolution.

With her engineering background, Prof Arnold wanted to make new, useful, problem-solving proteins. So she took her cue from the way nature does the same thing.

“I looked at it and said, well, nature didn’t actually design enzymes… How does this happen? You make mutations randomly, you look through a large number of things for the ones that have the properties you’re interested in, then you repeat the process.

Pretty nifty, but is there a practical application?  I’m so glad you asked!

It is now used in laboratories worldwide and has produced many valuable enzymes, including one used in manufacturing Januvia, a popular drug for type 2 diabetes, which would otherwise be produced using heavy metals.

“They replaced a chemical process with an enzymatic process, thereby completely eliminating toxic metals that were needed… and getting solvent waste reduction of 60%,” said Prof Arnold.

Directed evolution has also produced catalysts that allow industrial chemicals and fuels to be made from renewable sources.

The tech itself is getting close to 10 years old, so in a sense this is old hat, but I love knowing that we are finding ways to produce the things we need, especially medicines, via processes that do not produce hazardous waste that is difficult to deal with.  And whenever you hear about some scientist creating a bacteria or algae that can produce something useful, there’s a pretty good chance you can thank Dr. Arnold.
—————————————————
I have no idea how truly useful this technology can be, but it’s some pretty good thinking all the same.  Creating a process that is very low power that can extract atmospheric CO2 has a definite utility, both in reducing atmospheric CO2, and in producing a useful industrial chemical.  Will we someday see massive arrays of contactors busily scrubbing the atmosphere of carbon dioxide in an effort to stem global warming?  No idea, but it’s interesting tech all the same.
—————————————————
Living in the Puget Sound area, solar power isn’t as attractive an option for home generation, but wind power, on the other hand, especially since I live on the windward face of a ridge, has considerable appeal.  The winds aren’t strong all the time, but it’s a rare day when there isn’t a decent breeze.  However, home mounted wind turbines are frowned upon, thanks to blade noise in dense neighborhoods, so reading about this wind turbine is very interesting.  It looks pretty cool, like a bit of wind art, and if it is as quiet as they claim, dense neighborhoods might permit it.  Might have to call up my HOA, see what they think…
—————————————————
Sticking with energy, off-shore photovoltaic (PV) arrays have always been of interest to green energy, but PV cells are sensitive to motion, and any significant wave action reduces their efficiency and could damage them, so it’s an idea that has largely remained on the drawing board.  Now, a system called Heliofloat might change that.  It remains buoyant using what amounts to a bucket turned upside down, and then placed in the water.  The air that is trapped in the bucket not only provides buoyancy, but air is compressible, so it acts as a shock absorber.  The ‘bucket’ is also large enough that the wave energy tends to just pass through it, keeping the platform stable.  Obviously such a system would never survive the full fury of a storm on the open ocean, but it sheltered areas that are shallow, it could get the job done.
—————————————————
One more energy one, this time a battery.  Kinda.  More like an energy cell. It uses blue-green algae and manages to capture the energy from photosynthesis to produce electricity.  Very small amounts of electricity (under 1 volt), so scalability is a pretty big question, but hey, who knows, maybe someday we’ll charge our phones by letting them sit in the sun for a bit.
—————————————————
Finally, a bit of materials science.  Part of the reason automotive fleets are having a hard time getting drastic improvements in fuel economy is because cars are heavy. Meeting crashworthiness goals often means using considerable material to provide strength and crash resistance.  Now, there is a new, very inexpensive heat treating process that results in steel that is still very strong, but also extremely ductile, allowing for less steel to be used in the existing forming processes while still getting the desired strength from the resulting parts.  Once the testing is complete by the auto industry, I expect we’ll start seeing lighter car options, which means greater fuel efficiency without sacrificing safety or having to move to other materials that the automakers are leery of investing in (the capital costs in a switch from steel forming to something like carbon fiber is massive!).