A Night at the Oscars

I realize the Oscars are now ancient history, but the Littlest Bath gets in the way of writing.

The controversy this year was that there were no black nominees for any of the acting categories. The awards show was hosted by Chris Rock, who is not shy about making jokes about race, and this he did.

See the StarWipe article “All The Best GIFs Of Chris Rock Taking On Racism To The Delight Of Laughing White People.” The title is an exact description of what the link shows, but click over anyway.

I can understand dismissal of concerns about black representation in the Oscars. There is no single villain in the system, and as Rock himself points out, this isn’t all  that important an issue for blacks—not now, and even less so historically.

What I do question is the bizarre display of the Oscars. It’s distributed responsibility at its finest. No one particular person is responsible for the situation. Most of them are probably sympathetic to the fate of blacks as an abstract class of people and bought Ta-Nehisi Coates’s book, and some even read it.

Everyone gets to say they want to tear down the system even as they benefit and perpetuate the very same system.

Just as in the fight against heart disease or drunk driving, awareness only has value if it actually leads to a change in behavior, and there’s no sign that these quasi-religious renunciations of privilege have accomplished such change.

This, in turn, presents a larger problem. The discourse of this school of politics is resolutely immaterial in its language, with endless discussion of acknowledging and feeling and admitting and occupying, almost none of which amounts to what anyone might consider doing. Disclaiming white privilege doesn’t lower African Americans’ inordinately high unemployment rate or increase educational opportunities for children of first-generation immigrants. The alternative is simpler, but harder: to define racism in terms of actions, and to resolve to act in a way that is contrary to racism.

I take it back. I’m glad this post is heinously late. I remember Twitter lavishing Chris Rock’s performance with praise. But how has it changed their behavior? Have they minimally changed their consumption patterns in a way that is likely to increase employment among black actors? 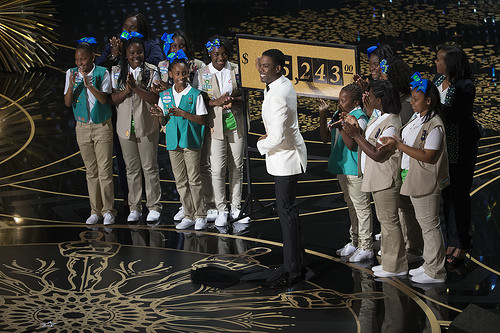 None of this need concern Chris Rock. His job was merely to keep an audience entertained. It’s his audience who wants it to be a bigger, more meaningful thing. When they make the movie, we want to be the supporting characters who were saying the right things at the time.

But with no one filling the leading roles, no one will care what any of us had to say.