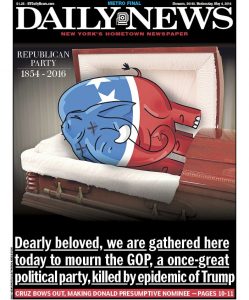 Canadian Colby Cosh looks at a history of acrimony between parties and their nominees. From the blissfully innocent days of yore: Is Mitt Romney the Most Unpopular Likely Presidential Nominee Ever?

I want to swim in this pool more than I have ever wanted to swim in any pool in my entire life. And I have a mild fear of heights!

Paula Garrett writes of the inner conflict within The Southern LGBTQ Experience, and Andrea Grimes says that red states need solidarity and not boycotts.

This reminded me of how surprised I was that they didn’t change the name of House Slytherin to House Snape or House Dumbledore or something.

Are we willing to forgive ex-Enron executive Andy Fastow?

Politicalsock says ideology is dead and this is the dawning of President Comacho.

This is heartening: Most Americans of both parties support felon voting rights. I was way out on left field on this a little over a decade ago. I assume soon I will be a racist knuckledragger for not supporting their right to vote while in prison.